Indian banks, especially public sector banks, have often been criticised for giving a long rope to the likes of Vijay Mallya of Kingfisher, Nitin Kasliwal of S Kumar's or Manoj Tirodkar of GTL. Reams have been written about how large corporations and their high-and-mighty promoters have used the system to their advantage, which has resulted in the rise in gross non-performing assets (NPAs) from Rs 2 lakh crore a few years ago to Rs 6 lakh crore now.

In fact, industry data corroborates the gross NPA figures of State Bank of India (SBI). For 2015/16, the largest bank in the country had the highest NPAs in the mid-corporate segment at Rs 41,515 crore - almost double that of large corporations in absolute terms. Likewise, NPAs of Rs 17,032 crore in the SME segment were almost at par with the Rs 20,696 crore for large corporations.

This is true for most PSBs as they are big players in the large corporate segment, while private players have been more aggressive in the working capital, SME and retail segments.

However, large accounts do not turn into NPAs easily because someone or the other - banks, NBFCs, industrialist friends or relatives - is ready to give short-term credit to help promoters pay the interest. A large corporate also has the advantage of group businesses to avoid defaults. The most important and preferred route, however, had been corporate-debt restructuring (though disbanded now) to get a moratorium on interest payments and negotiate long prepayment schedules.

Former RBI governor Raghuram Rajan had famously said: "In India, too many large borrowers insist on their divine right to stay in control, despite their unwillingness to put in new money." In fact, the restructuring route had, over the years, helped many large corporations to show low NPAs, compared to the bad assets numbers thrown up by mid corporations and SMEs. According to the RBI, gross NPAs, including restructured and written off accounts, were at 23.7 per cent of the advances for large corporations. In comparison, for mid corporations it was 31.5 per cent and 16.8 per cent for SMEs.

The NPA levels of large corporations are now all set to change with the central bank closing the corporate debt restructuring window. The RBI has also created a database of large corporations with loans of over Rs 500 crore. The idea behind the move was to spot early signs of stress and help lenders, across the board, know in case of a default event.

The recent asset quality review (AQR) where many large loans have been identified for higher provisioning is a case in point. For instance, SBI's NPAs in the large segment, which were less than Rs 2,000 crore during the past 4-5 years, have spiked to Rs 20,000 crore-plus in 2015/16. There is a similar trend in other banks. (see Busting the Myth). 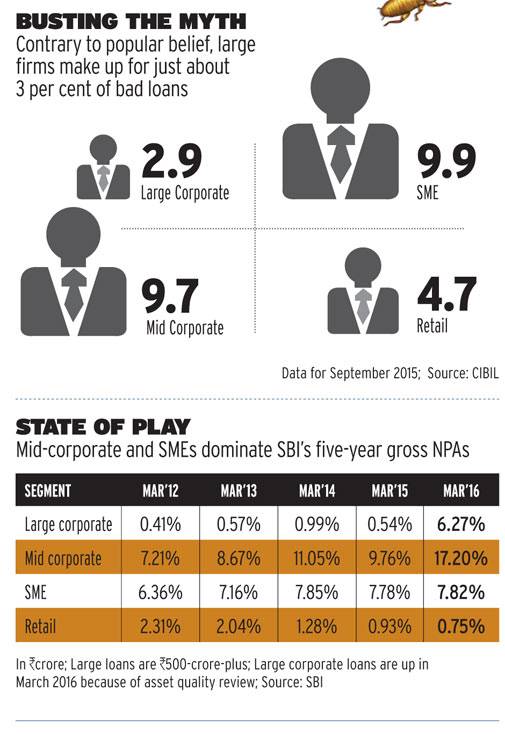 The high NPAs in mid-corporate and SMEs are easier to explain because they do not have the wherewithal to withstand an economic downturn or a liquidity crisis. The bankers are also quick to stay away from such companies in case of any signs of stress. In fact, most of these companies do not have the lobbying power to get a minimum of 70 per cent of lenders together to enforce a corporate-debt-restructuring package.

Suresh Khatankar, Executive Director, IDBI Bank, reasons that high churning of the SMEs and agriculture loan portfolio is the reason for higher loans in the two segments.

"The NPAs figure may look larger, but upgradations are also faster. The risk is also diversified and loans are not big in size," he says. Bankers say high interest rates in mid-corporate and SMEs compared to large corporations are also the reason for higher delinquencies. "A bank charges mid-corporates and SMEs anywhere between 13 per cent and 17 per cent, against 11-12 per cent for large corporations," says a banker.

In all NPAs, however, retail has been the safest with very low bad loan numbers. For instance, ICICI Bank, the largest private sector bank in India, has retail NPAs of 1.05 per cent, while its corporate NPAs are at 9.67 per cent, despite the fact that it is very aggressive towards the retail segment.

Retail NPAs of Standard Chartered Bank, the largest foreign bank in terms of branches, are at 3.46 per cent, while its corporate bad loans are at 24 per cent of the advances in that segment.

The retail banking model has also been evolving over the years as banks had booked losses in the unsecured segment, especially in personal loans, credit cards, etc. Many believe the corporate segment is also going through a similar transformation. Things like special debt restructuring (SDR) for changing the management are expected to be path-breaking initiatives, if executed successfully.