The Narendra Modi government may have had some role in the current slowdown, but it cannot be blamed for not trying to correct the situation. All central ministries and departments, with primary responsibility for social and infrastructure spending, are on overdrive to front-end expenditure to make up for the slowdown in consumption and private investment.

By August 31, apex food grain procurement agency Food Corporation of India received 85 per cent of the budgetary allocation of Rs1.07 lakh crore for food subsidy from the Ministry of Consumer Affairs, Food and Public Distribution. In fact, the Department of Food and Public distribution under the ministry had utilised 70 per cent of its budgetary allocation of Rs1.5 lakh crore in the first four months of the current financial year (April-July 2017). The ministry plays a key role in balancing consumer interest and farmers' interest by stabilising the prices of cereals and pulses while ensuring support prices for procurement.

According to data compiled by the Controller General of Accounts (CGA), the Ministries of Urban Development, Rural Development, Petroleum and Natural Gas, and Road Transport and Highways are all among the departments that have spent a higher share of the budgetary allocations in the first four months of the current financial year. 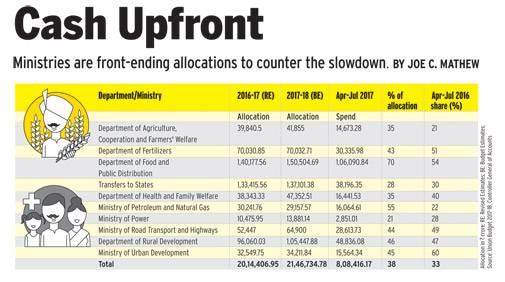 For instance, 55 per cent of the total budgetary allocation of Rs29,157 crore for the Ministry of Petroleum and Natural Gas was spent by July 2017 as against 22 per cent spent during the same period in the last fiscal. The Department of Rural Development spent Rs48,836 crore, nearly half of its Rs1.05 lakh crore annual allocation, in the first four months. The Ministry of Urban Development also utilised 45 per cent of budgetary resources by July end.

The extra spend was possible because the government advanced the date of the Union Budget to allow disbursement of funds to various departments and ministries at the beginning of the current fiscal. Since the change of the Budget date had no impact on revenue collection, total receipt of Rs3.03 lakh crore continues to be 19 per cent (18.2 per cent around the same time last year) of the expected revenue receipt of Rs16 lakh crore for 2017/18. The additional quantum of expenditure resulted in a fiscal deficit of Rs5.05 lakh crore, 92 per cent of its annual fiscal deficit target of Rs5.47 lakh crore in the first four months. While these percentages will change as revenue collection improves in the coming months, the fact remains that the government may have to pump in additional money to sustain the growth push it is trying to provide to the Indian economy.