Bank on Rate Cut: Wholesale Price Index-based inflation dipped to 5.96 per cent in March, a 40-month low. Food inflation, the bugbear of policy makers, declined to 8.73 per cent in March from 11.38 per cent in February. A year ago, in March 2012, inflation was at 7.69 per cent. The market now hopes for a further rate cut by the Reserve Bank of India on May 3.

CORPORATE
Reliance Industries reported a six per cent year-on-year rise in standalone net profit in fiscal year 2013. Revenue rose 9.2 per cent year-on-year to Rs 3.71 trillion, RIL Chairman Mukesh Ambani aims to double RIL's profits in the next five years by increasing petrochemical-producing capacity. The company is also planning to re-enter the telecom space through Reliance Jio Infocomm, the only company to have access to broadband wireless spectrum across India.

After Adani Power, it is now the turn of Tata Power to be awarded compensation for losses incurred from having to import coal. The Central Electricity Regulatory Commission has directed five state governments to compensate it for losses incurred by the 4,000-MW Mundra ultra mega power project. The International Monetary Fund said that growth in the Indian economy had bottomed out. Improved external demand, recent policy moves, solid consumption and a better monsoon are expected to spur the recovery. In its World Economic Outlook, IMF has cut India's growth projection to 5.7 per cent for calendar year 2013 from its earlier projection of 5.9 per cent.

Finance Minister P. Chidambaram has sought to attract foreign investment from the U.S. and Canada to fund a record high current account deficit. Officials initiated steps to attract at least $20 billion in new investment to fund the deficit without depleting India's $300 billion in foreign exchange reserves.

12,000 MW Power deficit of the country during peak hours in the last financial year. Against the peak demand of 1,35,453 MW, total power availability was 1,23,294 MW in the last financial year. The Southern region was the worst hit as demand for electricity exceeded supply by 6,052 MW. Availability was 31,586 MW during peak hours, according to the Central Electricity Authority.

MARKETS
Gold prices are slipping and consumers are cheering. The import of the metal has dropped 24 per cent since January 2013. Demand for the yellow metal has surged in domestic market. More commodities also got caught in gold price vortex. Silver and copper have hit multiyear lows.

An extraordinary 34-carat 'Princie' diamond from the mines of Golconda, once owned by the world's richest man - the last Nizam of Hyderabad - managed to shock and awe everybody by being sold for $39 million. It set a new record for any jewel sold at Christie's, surpassing the record of $24.3 million for the Wittelsbach Diamond in 2008. 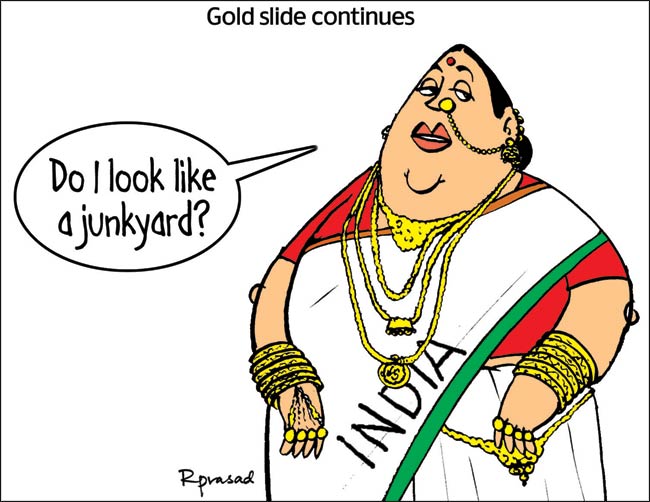 'Infosys must bring back Narayana Murthy'