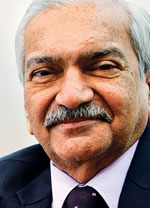 The creation of Niti Aayog, with a clearly focused mandate in terms of its 13 specific objectives, represents a paradigm shift in Indian government's approach to policymaking and policy implementation. [Niti is short for National Institution for Transforming India.] Its emphasis on a Bharatiya approach to overall and inclusive socio-economic development of the country and the new focus on cooperative federalism to ensure an effective involvement of states in the process of policy formulation and implementation makes Niti Aayog a unique and innovative experiment of the government towards evolving the most appropriate institutional framework to replace the Planning Commission.

It was obvious that with the large-scale liberalisation of Indian economy in the early 1990s, the Planning Commission had outlived its utility and the experience of the last decade conclusively established that it had lost its relevance and effectiveness in the post-reform era. In fact, during the last two decades, the Planning Commission focused more on process-related issues and matters pertaining to operational aspects of allocation and transfer of resources from the centre. As a result, the required focus on various aspects of formulation of socio-economic policy and the overall strategy of effective governance was entirely missing.

Moreover, the centre-state relations often reflected a one-way street, which contributed to growing discomfort and discontent among many state governments. This created an environment of lack of trust and confrontation between the centre and the states, which was not conducive to the vision of transforming India into a forward-looking progressive nation that would play a leadership role in the emerging global scenario. In this context, there was an urgent need to create a platform that would ensure cooperation rather than confrontation between the states and the centre and in the process take a holistic and integrated view of the policy formulation and implementation process for the nation as a whole.

Niti Aayog is expected to be well-equipped to face the challenges involved in providing sound, strategic and technical advice on the socio-economic issues and strengthen the institutions of governance based on the basic principles of federal structure enunciated in our Constitution. The key to the success of this new innovative institutional structure will be the nature of multi-disciplinary team of professionals that would comprise Niti Aayog and the degree of empowerment, confidence and credibility that it enjoys with the centre and the state government.

Niti Aayog will have to adopt a bold, unconstrained and unconventional approach to deal with the mammoth task of translating Prime Minister Narendra Modi's vision of our great nation into a reality within a reasonable time-frame. It will have to find ingenious ways to resolve inherent contradictions of our systems and find innovative solutions to the differences among the states and between the centre and the states to take this country forward on a sustainable path of all-inclusive development on a substantially higher trajectory.

I firmly believe that Niti Aayog, under the dynamic leadership of the Prime Minister, along with its highly competent team of professionals, has the potential to transform India into a formidable economic superpower in the years to come. This government's actions so far have been characterised more by hype than anything substantial. The replacement of the Planning Commission with the Niti Aayog establishes the government's desperate attempt to try and undo everything that has been done in the past and, of course, accompanied by a lot of hype and hyperbole. The government has not been able to spell out in detail how the Niti Aayog will be different from the Planning Commission that has successfully served the country's development purpose for 65 years. At best, it appears to be the classic case of 'old wine in a new bottle'.

Till date the only information made available by the government about the Niti Aayog is a one-page release with catchy terminology like "cooperative federalism" and "effective governance". The very nature of the Aayog defies the concept of cooperative federalism as the government itself admits that it is just a "think-tank" and its role, unlike the Planning Commission, will only be advisory, and the real power will rest with the central government and the Prime Minister [Narendra Modi], who is its Chairman. While the Planning Commission was a strong, powerful and autonomous institution, the Niti Aayog will end up to be the handmaid of the Prime Minister's Office, quite contrary to the claim that it shall be a decentralised and participative decision-making body.

It is wrong to say that the Planning Commission was a top-down decision imposing body as is claimed in the release. "The centre-to-state one-way flow of policy, that was the hallmark of the Planning Commission era, is now sought to be replaced by a genuine and continuing partnership of states," says the release in an apparently weak defence to disband the Planning Commission. I have myself been the Chief Minister of a progressive state like Punjab for five years. I never found any difficulty in working with the Planning Commission all through my tenure, which also included two years of the NDA government at the Centre. The Planning Commission would duly discuss the annual plan with the states before its approval. It would also duly monitor the implementation of the plans and programmes to ensure the desired results. Niti Aayog is most unlikely to have such powers and authority.

The Niti Aayog is supposed to have all the CMs and lieutenant governors on its board of governors. I wonder how it is in any [new or] different from the Planning Commission, which was reporting to the National Development Council and has all the CMs and LGs as its members. Moreover, I doubt the practicability of the idea as it is difficult for all the CMs and LGs to come together so frequently, as the Niti Aayog will require them, given their respective schedules and engagements. The CMs do not sit to deliberate each others' plan allocations as the Niti Aayog expects them to do and that too without any powers.

That the government was in a hurry to scrap the Planning Commission was quite obvious when the Prime Minister announced this decision in his first Independence Day speech on August 15, 2014, when he was barely two months into the office, surely without much knowledge and experience about its (Commission's) functioning. Not much homework appears to have been done before taking such a major decision as the government is still not clear about how it will be a different body that seeks to "transform" India.

India should not yield ground on IPR regime