In July this year, L Capital Asia, the private equity, or PE, arm of the world's largest luxury conglomerate LVMH, announced its first investment in India. The company it chose was Genesis Luxury, the luxury arm of privately-held Genesis Colors, founded by banker-turned-entrepreneur Sanjay Kapoor in 2008. Genesis Luxury, which retails national and international brands such as Satya Paul, Burberry, Canali, Paul Smith, Just Cavalli and Jimmy Choo, and is said to be growing at 50 per cent year on year, was an obvious target. "Genesis Luxury is the best-managed company in its space, and if we combine it with our skill sets, we can expand this platform in a big way," says Ravi Thakran, Managing Partner, L Capital Asia.

But this was not the first investment of its kind in India. In the same month, PE firm SAIF Partners led a $5.5 million (Rs 24.75 crore) investment in Zovi.com, the country's first online premium apparel brand. Around the same time, Franklin Templeton bought a 20 per cent stake in fashion retail chain Kimaya Fashions for about Rs 60 crore. In May, Tiger Global invested about Rs 72 crore in Exclusively.in, which is barely one year old and sells Indian ethnic wear, apparel and accessories to the Indian American diaspora. 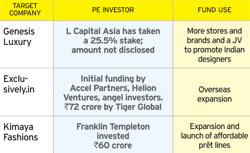 The investments have followed the success of homegrown companies in the fashion and luxury space. "When disposable incomes and discretionary spends rise, apparel as a category is the first target of consumers," says Mukul Singhal, Vice President at SAIF Partners. "When that category does well, it attracts the attention of investors."

Take Kimaya, for instance. The eight-year-old Mumbai retailer of designer wear, with 16 standalone stores in the city, each of which stocks creations of more than 200 designers, has been growing at 35 to 40 per cent since it started. Owner Pradip Hirani plans to use the funding to open stores in Surat, Ludhiana, Kolkata, Pune, Hyderabad, London, New York and Singapore, taking their number to 30 in the next three years. He also plans to make designer wear more affordable by launching prêt collections at less than $100.

Genesis Luxury is set to open new stores at The Oberoi in Gurgaon and the Shangri-La that sits atop the Palladium luxury mall in Mumbai. "With the opening of luxury malls in key metros, the retail space is looking far better. But we need many more luxury retail spaces to match the rate of expansion," says Kapoor. Genesis Luxury will also use the PE funding to form a new joint venture to promote Indian designers, helping them organise and scale up their businesses.

Exclusively.in, founded by NRI Sunjay Guleria, plans to launch operations in India and 14 other countries at the end of this year. Apparel constitutes about 60 per cent of its sales and the bulk of sales are items like designer sarees priced at $200. In August, it also launched an in-house online lifestyle brand called SherSingh.in, which sells, among other things, apparel and merchandise inspired by cricket.

A forkful of concern