Hyderabad, home to several information technology, pharmaceutical and construction companies, goes without power for more than eight hours every day, making the state capital akin to a very large and crowded furnace in these days of summer. The crowds may not stay quiet about this when elections to the state assembly come around next summer.

That gives the chief minister very little time to solve the problem of shortages. And there is very little he can do about the tariffs. In January this year, the five power distribution companies in the state obtained the state regulator's permission to charge Rs 9 to Rs 11 per unit for power from gas-based plants, up from just three rupees earlier.

Steep indeed, but Reddy thinks of it as a small price to pay for consumers who do not want power cuts. That will be the industrial users. The good thing is that you get to choose. If you do not want this power, you can stay with the regular supply, which the same distributors supply from coal-based or hydro power plants. For the gas-based one, you need to especially apply.

If enough people apply for it, power generation using gas will become viable. Gas for power production, imported as liquefied natural gas (LNG), costs three times what coal does. And it is LNG that has become par for the course ever since gas from the KG basin evaporated. And it is too expensive to be viable under the old tariff structure. 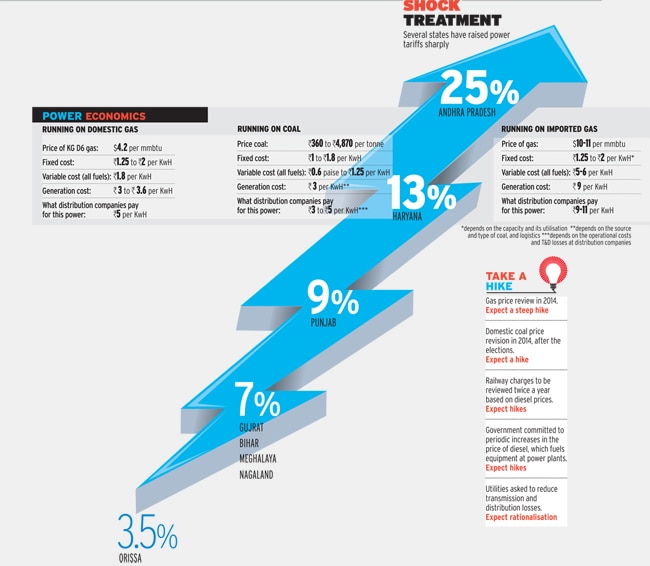 Click here to Enlarge
It is not just Andhra Pradesh. Punjab, Haryana, Bihar, Delhi, Meghalaya and Orissa have also all raised tariffs to make room for higher fuel prices (see Shock Treatment). Ten other states have moved their regulators for tariff increases. As more and more increases get approved, it is not just the distribution companies that are heaving sighs of relief.

When the Central Electricity Regulatory Commission on April 2 accepted Adani Power's case for raising tariffs and asked its customer states to set up a committee to decide how much the tariffs should go up, the company's shares jumped 15 per cent on the Bombay Stock Exchange.

Interestingly, rivals Tata Power and Reliance power too saw their stock rise by one and five per cent, respectively. The investors knew it was a matter of time before the latter two companies got similar shots in the arm. And sure enough Tata Power got it a fortnight later. Reliance Power is waiting with bated breath.

The CERC order could not have come a day too soon. Both Adani and Tata Power have plants in Mundra, Gujarat, and have been using imported coal. They had been losing Rs 790 crore and Rs 1,873 crore every year, respectively.

The two projects were conceived when coal was available from Indonesia at less than $50 a tonne, much less than the going rate of $90 a tonne in other markets overseas. But in 2011 Indonesia's coal became costlier and matched international prices. Expectedly, Adani and Tata's projections turned to ashes.

Reliance Power has sought higher tariffs for the power from its Sasan plant on grounds of increase in construction cost and the depreciation of the rupee, which has fallen about 37 per cent since April 2007.

Compel l ing arguments, but sound reasoning has seldom worked in the power sector, given its perceived political sensitivity. Why, cheap power to farmers continues all around. In Punjab and Andhra, it is not even cheap; it is free. The political reluctance to raise tariffs had pushed distributors in Punjab, Tamil Nadu, Andhra Pradesh, Madhya Pradesh, Bihar, Rajasthan, and Uttar Pradesh to the verge of bankruptcy and they had to be bailed out by the finance ministry, which lavished Rs 1.9 lakh crore on them. The condition for the bailout was that the states must raise tariffs and cut losses. The big change now is that regulators have finally begun to bite the bullet. And they are showing teeth of steel.

In November 2011, the Appellate Tribunal for Electricity, which is the arbiter in disputes with the regulator, said state electricity regulatory commissions must initiate suo motu tariff revisions in case distribution companies failed to approach them on time. This has been used by the Tamil Nadu electricity regulator to raise tariffs. "I believe politicians have realised that giving no power is hitting them more adversely than expensive power," says Debashish Mishra, Senior Director at accounting and consultancy Deloitte's India chapter.