The September quarter results of IT companies suggest their bad times may be ending. 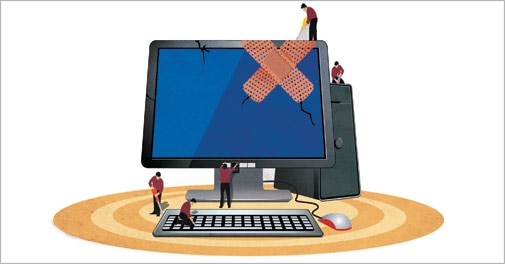 It is a happy autumn for Indian IT services exporters, many of whom were worried about the poor macroeconomic climate in the United States and Europe, their largest markets. In the September quarter, most large cap as well as mid-tier IT companies reported broad-based growth, their numbers coming ahead of market expectations.

While TCS (Tata Consultancy Services), India's largest IT exporter, leads the pack in terms of top line growth, climbing 5.4 per cent over the June quarter, there was also heartening news from companies which had been struggling over the last two years.

Infosys, for instance, had been finding it tough to meet investor expectations for many quarters, but it delivered revenue numbers far higher than expected. It reported dollar revenues of $2.06 billion for the September quarter, up 3.8 per cent sequentially - analysts had projected a growth of about 2.6 per cent.

Wipro's IT services revenues for the September quarter increased 2.7 per cent over the June quarter to $1.63 billion, the best growth numbers the company has posted in seven quarters. In the mid-tier IT pack, Mindtree and Persistent Systems, among others, declared better-than-expected results.

The green shoots of global economic recovery are clearly visible in technology spending. IT executives, many of whom have been advising "cautious optimism" for several quarters, have turned more confident. In their post-results commentary they point out that discretionary technology spending is bouncing back. S. D. Shibulal, CEO and MD of Infosys, for instance, noted that during the last quarter, the company witnessed broad-based volume growth, robust client additions, five large deal wins and increased sales momentum of its big data and cloud offerings.

As the slowdown hit their economies, global customers were outsourcing only essential work such as application maintenance services. There were restraints on discretionary spending which includes consulting, new software package implementation and even work around digital and new technologies.

However, it is not all smooth sailing yet. IT lobbyist NASSCOM had projected sector export growth for 2013/2014 at 12 to 14 per cent. Even with the current spurt the business, NASSCOM may not immediately revise these estimates upwards.

While tabulating average industry growth, NASSCOM factors in different segments of the industry - Indian IT services companies; multinationals such as IBM, HP and Capgemini; captives or the Indian technology arm of global corporations; and BPO companies. A couple of these segments could easily pull the average growth numbers down.

"By October-end, companies send their revised projections to NASSCOM. Quite a few of them are pending. There are captives who may not be growing that much. The headcount increases here haven't been substantial," says Krishnakumar Natarajan, Mindtree's CEO and MD, who chairs NASSCOM.

The other segment that could pull industry growth rates down is business process outsourcing, where some executives are projecting single-digit growth. BPO firm EXL, in the September quarter, revised its full-year 2013 guidance downwards, to revenues between $473 million and $478 million, from revenues of $495 million to $505 million seen in March, partly due to currency movements. That points to a growth of eight per cent at the higher end. WNS too has pared its full year guidance and expects to grow in the nine per cent range. India's largest BPO firm Genpact said in August that its full year revenues will come in at the lower half of its guided range of $2.15-$2.20 billion.

There is variance in the demand momentum of IT and BPO companies  for several reasons. Natarajan points out that during a slowdown BPO companies do reasonably well because budgets here are not discretionary - it is well planned spending by global corporations to boost efficiencies. Therefore, BPO firms will not gain much from a return of discretionary spending budgets when the economy recovers. But there are also other challenges BPO firms face today. Sudin Apte of Offshore Insights, a research outfit, says standalone BPO firms are struggling.

"Many of them are not bringing in any transformation or a new technology to the process. Two, the sophistication of their processes integrating with mainstream IT systems also becomes tricky," he adds.

Voice-based BPO does not require too much of IT integration. But in a non-voice BPO set up where companies do a lot of transactional work such as insurance claims processing, there is a need for an IT arm. "It is becoming relatively easier for larger companies to sell BPO in addition to IT. But that is not true for standalone small BPO companies," Apte adds.

However, even if the overall industry grows at a slower pace, most IT services companies still have plenty of reasons to smile.

Why Indians talk less on phone during July-Sept quarter