Interest rate hikes take their toll…
It is quite clear now that the hard interest rate regime pursued by the Reserve Bank of India, or RBI, has started to slow down industrial production. Moody's Analytics observes in its recent report: "Industrial production growth (in India) has slowed moderately over the past 18 months, from a high of 18 per cent year-onyear in December 2009 to 1.6 per cent in December 2010." And it expects manufacturing to remain subdued in the first half of 2011. 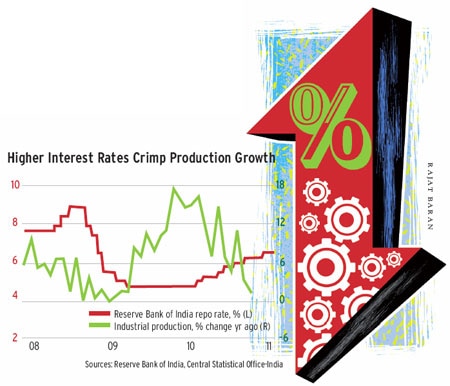 This was anticipated by analysts. The central bank raised key interest rates six times last year. In its quarterly monetary policy this January, the apex bank again raised repo and reverse repo rates by 25 basis points, following which many public and private sector banks once more adjusted their lending rates in areas such as corporate credit, home loans and auto finance. Higher interest rates impact industrial growth in two ways - they slow down commercial borrowing and dampen household demand for consumer goods as well as business demand for capital goods.

… And will impact the India growth story…
High inflation and high interest rates could hurt GDP growth in 2011/12. "If inflation remains above the government's tolerance levels, we can expect three more interest rate hikes (at least a 75 basis points increase) in the near future," says Abheek Barua, Chief Economist of HDFC Bank, adding that RBI'S strategy to compress demand to control inflation is weighing on India's economic growth. Although the government in its annual budget projected India's economy to grow at about nine per cent in the next financial year, experts feel it will be difficult to achieve that target. "The rate of GDP growth will come down to eight per cent in 2011/12," says Barua. Moody's Analytics expects industrial production growth to improve in coming months but there is little chance of it touching the high of 2009 again this year.

… Even as inflation remains high
Meanwhile, despite the efforts by RBI, inflation continues to remain obdurately high. The Wholesale Price Index, the main inflation gauge, rose 8.23 per cent in January from a year earlier, higher than the four to five per cent both RBI and government would like it to be. Even though core inflation has slipped a bit in the past few weeks, the rate of food inflation has rarely fallen below double digits since June 2009. Experts think the annual budget has done little to address supply constraints - the key reason behind the high inflation numbers.
TweetYoutube