The Real Estate Bill is a shot in the arm for the beleaguered sector. But there are new concerns.
By Mahesh Nayak | Print Edition: April 10, 2016 The timing to raise money couldn't have been any better for Kotak Realty Fund. Just a week before Parliament passed the Real Estate Bill, Kotak raised $250 million (Rs 1,600 crore) from foreign institutional investors to primarily make equity investments in residential projects. On March 15, the Lok Sabha passed the Real Estate Bill in Parliament giving real estate industry status. The sector will now have its own regulator, which aims to protect the interests of property buyers against fraudulent developers.

"Having a watchdog is always good as it will bring transparency in the sector," says Vinayak Burman, Founder Partner, Vertices Partners, a Mumbai-based corporate law firm. "But it will most probably increase cost, which ultimately will be borne by the end consumer, but that is the price that one would need to pay for the sense of security." Adds Vikas Chimakurthy, Director at Kotak Realty Fund: "The Bill will bring discipline in cash flow management because 70 per cent of the sales proceeds have to be deposited into a separate account for meeting cost of construction."

The government's intention behind the Real Estate Bill has been to ensure that project funds are not diverted. So, the Bill clearly mentions that the developer has to keep aside 70 per cent of the money received from buyers in a separate account. While the new rules have sent shivers down the spines of developers, investors - especially private equity (PE) players - are seeing pure equity capital investment making a strong comeback in a sector that in the past few years was dominated by structured financing, especially debt finance.

"A combination of no pre-sales without approvals and 70 per cent sales proceeds in an escrow account may lead to debt financing not being the preferred option to acquire land," says Chimakurthy. "With the sector already undergoing pain and sales not picking up, I see pure equity funding making a comeback for land at the right price." Since 2008, around $9 billion came into the sector through PE funds in the form of equity capital, compared to $18 billion of structured debt (see graph: PE Money in Realty).

However, the provision of blocking 70 per cent of sales proceeds in an escrow account also has its downsides. "It could be a dampener for the sector," says Burman of Vertices, adding that banks could consider lending to builders by trying to take the escrow account as an additional collateral, but "how many would be willing to take the risk considering the legalities involved in obtaining such security as well as enforceability issues involved in case of default by the developer?". 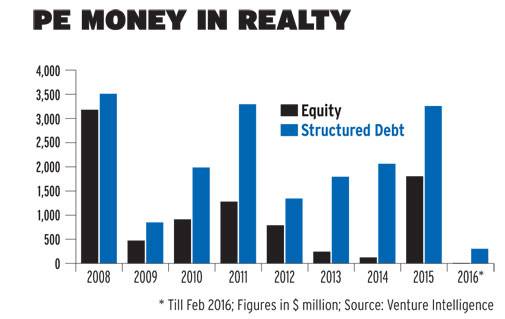 "Placing 70 per cent of receivables in an escrow account in an economy with such high interest rates is going to lead to a complete shift in the business model of many companies," says Neha Hiranandani, Director at House of Hiranandani. "The Bill has failed to bring into its ambit government authorities that are responsible for the continuous changes in regulations, and lack of transparency and predictability in functioning. The Bill is, therefore, incomplete in its approach, and the outcome is going to be more expensive products for consumers."

Hiranandani adds that developers would have to change strategy; since it would be difficult to run speculative construction at an interest cost of 12-15 per cent, developers would need to take recourse to costlier equity capital, either from PEs or high net worth individuals. Agrees Kamal Khetan, CMD at Sunteck Realty: "We will see land getting funded through PE players. Developers with strong cash flows and balance sheets will be able to raise funds from PE players at attractive return parameters, while HNI funding, a very expensive source of funding, will usually be prevalent in the unorganised space of the realty sector."

The deposit of 70 per cent is for both construction cost and land cost, and the money can be withdrawn in a staggered way based on milestones achieved during construction. The balance 30 per cent of receivables from buyers can be used to service borrowings for the land (both principal and interest).

This may lead to interplay between real estate PE players (REPE) and non-banking finance companies (NBFCs) as lenders or partners for purchase of land. The developer acts as project manager, and construction companies carry out construction and receive payments after completion of milestones. Says Sudip Mullick, Partner-Real Estate, Khaitan & Co, "REPEs and NBFCs may have to take larger project risk in terms of assessing viability of the project as to whether there would be sufficient takers (purchasers of units) for the project to get back their principal and returns."

Though the Bill paves the way for more PE participation, one has to remember that PEs focus more on returns (IRR). Second, equity capital is making a comeback in a more strategic way. In region like Delhi-NCR, inventory level is said to be at 65 months, Mumbai around 48-50 months, Chennai at 36-40 months, Bangalore at around 34-36 months and Pune, 30-32 months. The process of deleveraging may be around the corner, and because of the high inventory, there may be an opportunity to play in the distressed market.