Here's some food for thought. Abundance of natural resources in India does not mean anything when it comes to environmental preservation. States such as Jharkhand and Madhya Pradesh rank poorly on environment preservation, while those like Goa, Orissa and Chattisgarh fare just marginally better. In contrast, states such as Tamil Nadu and Karnataka, despite rapid industrialisation and demographic pressures, have maintained environmental conditions.

These are the results of a study by Chennai-based Centre for Development Finance (CDF) on environment challenges and priorities faced by India's 29 states. 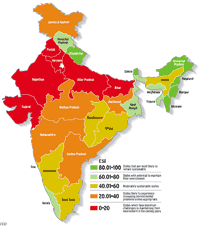 Click here to Enlarge
In what is an early effort into a topic gaining attention, CDF has computed an Environment Sustainability Index (ESI) score based on 40 indicators ranging from air and water quality to population pressure in relation to a state's resources and policy framework. The ranking shows how states fare relative to each other.

A low ESI for a state is as much a sign of pressure on its resources and environment as unresponsive institutions.

Northeastern and Himalyan states as also West Bengal and Kerala, CDF concludes, are the only ones that are maintaining themselves on the Green count as of now.

WHAT THE ENVIRONMENT SUSTAINABILITY INDEX (ESI) THROWS UP

"You must be a top player in your business segments"