The reasons for the persistently high food inflation of the last few years have been much debated. Many ascribe it to the rising incomes of Indians, which is leading to greater consumption and pushing up prices. There is great need to improve supply chains and reduce wastage. Some aspects of India's food inflation: 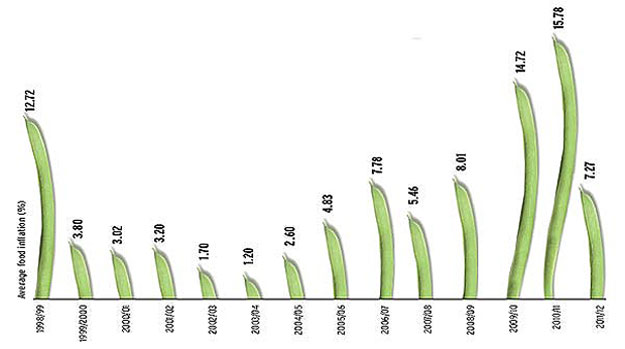 Food inflation has been consistently higher during the eight years of the United Progressive Alliance's rule (2004/05 to 2010/11) than it was during the six years of the previous National Democratic Alliance government (1998-2004). The only exception was 1998/99 Almost all 55 food items monitored while computing food inflation saw fluctuations in prices in past 14 years. One item, however, whose price has never once dipped, but only keeps rising every year, is milk.

The most price volatile item in the food basket is vegetables. Prices of vegetables swing wildly from one year to the next, seemingly unrelated to any macro factors such as the nature of the monsoon in a particular year, etc. How a spacecraft works