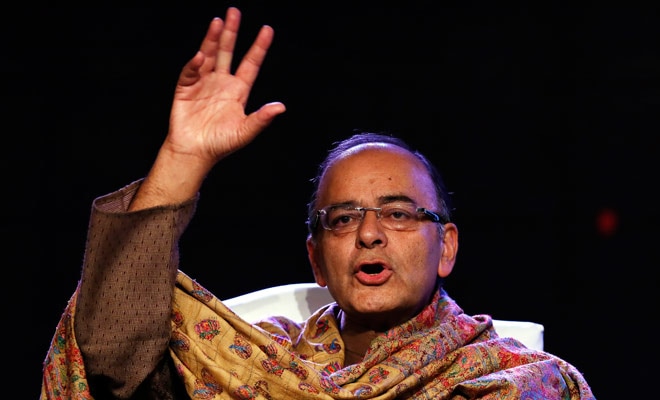 On July 10 last year, while presenting his first Union Budget, Finance Minister Arun Jaitley shared his two worst fears for the year. One of them was rising oil prices . His prayers were answered. Oil prices more than halved in the next few months (see Oil Slide), yielding huge savings on fuel subsidy, which fell from Rs 85,378 crore in 2013/14 to Rs 60,270 crore in 2014/15. He used the cushion to control the fiscal deficit.

Now, that cushion is getting a bit frayed. Oil is now trading near $67 a barrel, 45 per cent higher than the low of $46 touched in January. In the first fortnight of May, it rose 13 per cent; the rise was steeper in rupee terms as the currency has fallen three per cent against the US dollar in the last one month.

Rs 13,000 CRORE
Amount raised from the additional excise duty that is spent on building roads

While some fear that this may upset a lot of assumptions made in the Budget, Jaitley still has a lot of headroom to manoeuvre. For one, the 2015/16 Budget's fuel subsidy projection of Rs 30,000 crore has been made assuming crude oil at $70 a barrel. The current price of $67 - which most experts are already saying is too high and will correct - is still lower than what the Budget assumes.

However, what is a bit more worrying, though manageable, is the rise in the import bill. India imported crude oil worth $138 billion in 2014/15. If this figure rises, trade and current account deficits will widen, pressuring the rupee. Falling rupee is not good for foreign investors as it lowers their returns in dollar terms. Though there is a fear that this may hit plans to attract capital to the country, it may not turn out to be a serious issue. This is because India's current account deficit is well under control. It is projected to be less than one per cent of gross domestic product (GDP) in 2014/15. It was 1.6 per cent in October-December 2014 and two per cent in July-September 2014. These figures, much lower than the scary 4.7 per cent touched in 2012/13, should be well within the comfort zone of foreign investors.

Bank of America Merrill Lynch had, in a report in May, revised the current account deficit forecast to 0.8 per cent of GDP for the current financial year. Its earlier projection was 0.7 per cent. The rise in crude oil prices played a vital role in this change.

However, two areas where rising oil prices may test the government's resolve is subsidy reforms and inflation. It deregulated diesel prices last year. Now, prices of diesel, like that of petrol, follow global trends and are changed without government intervention. This worked fine when crude oil prices were falling.

Now, experts are asking if oil prices rise steeply, will the government continue to pass on the burden to consumers or absorb a part of the increase, effectively rolling back one of its key subsidy reform? Only time will tell, though the government seems to have a better handle on the LPG problem. It has started disbursing subsidies directly to bank accounts of 123 million consumers. The 2014/15 Budget kept Rs 22,000 crore for LPG subsidy. The government is hoping that direct transfer of funds will bring down leakages and reduce its subsidy bill drastically.

In response to the global trend, Indian oil companies have increased petrol prices by Rs 7.09 a litre and diesel by Rs 5.08 a litre in May. If the trend continues, it will start reflecting in the economy's health. Though consumer price inflation fell from 5.3 per cent in March to 4.9 per cent in April, it is likely to spike again if petrol and diesel prices continue to rise. Food prices may also go up as transport costs increase. Back-of-the-envelope calculations indicate that a five per cent change in petrol and diesel prices impacts consumer price inflation by 45 basis points. The Bank of America Merrill Lynch report also indicated that Indian authorities may be confident about keeping inflation below six per cent but oil prices continue to be a threat.

This is especially worrisome in light of the crisis that people are facing in large parts of rural India due to crop damage in recent rains. With the monsoon, too, predicted to be weak, the rural poor will be under a lot of pressure if the country goes through another round of high inflation, testing the government.

INDIA IMPORTED CRUDE OIL WORTH $138 BILLION IN 2014/15. IF THIS RISES, TRADE AND CURRENT ACCOUNT DEFICITS WILL WIDEN

Further, Jaitley last year levied additional excise duties on petrol and diesel with an aim of raising Rs 13,000 crore a year to build roads. The market fears that if oil prices keep going up, he will have to cushion customers by lowering these duties. But the road ministry, working overtime to kick-start the countrys road building programme, can ill-afford any cut in funding at this stage. In the 2014/15 Budget, it was allocated Rs 40,000 crore, including the money collected from these additional duties. However, indications from finance ministry officials are that they are comfortable with the duties as long as crude oil prices stay below $80 a barrel.

This, say experts, is likely, as the global oil market is still in surplus. Also, many in industry hope that things may improve in future as more Iranian and US supplies come to the market in response to higher prices.

But for now, the spotlight is on the Reserve Bank of India's monetary policy in June. Will Governor Raghuram Rajan reduce interest rates or cite inflation worries and delay easing till there is more clarity on oil prices? For him, too, it seems to be a tough call.