Keep that seat belt on

Two of the country's three listed airlines have reported a profit for the quarter that ended in June. Market leader Jet Airways reported a net profit of Rs 36.5 crore, while SpiceJet reported Rs 56.15 crore. There has been some excitement in the industry because of this, but there is still reason for caution.

An August 6 Bank of America-Merrill Lynch report on the aviation sector says the airlines' performance in the April-June quarter will help them lower losses for 2012/13 and turn profitable by 2013/14.

An Angel Broking report on SpiceJet dated July 31 says the airline's plan to import fuel is likely to improve profitability. The brokerage expects the airline to report a profit this year.

An HSBC Global Research Report on Jet Airways dated August 7 says the airline has turned profitable faster than anticipated. The brokerage had originally expected the airline to turn around in the October-December quarter, which is peak travel season. The operating environment is still tough. There could be concerns on the rupee and fuel fronts: Neil Mills
Kotak Institutional Equities feels that Jet's and SpiceJet's earnings augur well for the industry, because they indicate that Indian airlines have managed to pass on to customers the increases in costs due to higher fuel prices and airport charges.

This pricing discipline is due to drastic capacity reduction by Kingfisher Airlines, minimal capacity addition by other airlines, and tightening of incremental credit to the industry.

Industry pundits are also gung-ho because yields (passenger revenues divided by the cost incurred by the airline) have not fallen in the traditionally weak July-September quarter. Typically, yields in this quarter are five to 10 per cent below April-June levels. Higher yields indicate higher passenger revenues and therefore better pricing power for airlines.

Kotak's index of average one-week advance fares on eight routes shows that fares for the July-September quarter have increased 2.9 per cent over April-June levels.

And now for the not-so-good news.

A close look at the results shows that Indian aviation is not as promising as it is being made out to be. Jet's and SpiceJet's profits were boosted by other income.

What it all boils down to is that Indian airlines raised fares to offset costs, and were helped along by Kingfisher's slow demise and national carrier Air India's persistent woes. In 2011/12, airlines complained that Air India's low pricing was hurting their profits. Any further improvement in pricing or cost reduction - due to lower fuel prices, say, or rupee appreciation - will rapidly increase profits. 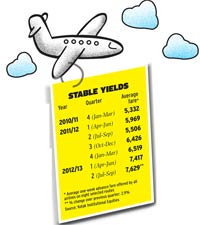 Click here to Enlarge
However, other structural concerns persist. Only when they are resolved will the recovery be truly sustainable.

"Key policy changes - stipulating aviation turbine fuel as a declared good with a uniform four per cent sales tax across the country, allowing foreign direct investment in airlines, free use of bilateral rights by Indian carriers, and growth of Tier II and Tier III airports - would give the sector an added fillip," says Amber Dubey, Partner and head of aviation at KPMG.

The airlines themselves are cautious about the future.

"The operating environment is still tough," says SpiceJet CEO Neil Mills. "There could be concerns on the rupee and fuel fronts."

The Jet outlook statement after the results did not suggest concern over yields and load factors, but sounded caution on the exchange rate, fuel prices, an economic slowdown, and higher charges for the new terminal at Delhi airport.

So far, then, it is a fragile recovery, alive on hopes that there will be no shocks on the oil and rupee fronts, and that the Vijay Mallya-owned Kingfisher will not return from the brink.
Tags: Jet Airways | SpiceJet | SpiceJet net | Jet Airways net | net profit

How India can prevent another power grid collapse