Monsoon Worries: The monsoon's worst start in three years is threatening crops from rice to sugarcane. Rainfall from June to September, which accounts for 70 per cent of total precipitation, may be below normal this year. Any shortfall will hit the economy hard. Farm output accounts for 15 per cent of India's GDP. And food prices have a weightage of about 14 per cent in the inflation basket.

In a setback to West Bengal Chief Minister Mamata Banerjee, the Calcutta High Court has struck down the Singur Land Rehabilitation and Development Act, terming it "unconstitutional and void". The legislation was enacted by the state government to return part of the land acquired from "unwilling farmers" for Tata Motors's Singur plant. The battle between Tata Motors and the West Bengal government will now move to the Supreme Court.

The good times are a distant memory for Kingfisher Airlines. Lessors have taken back more than 30 aircraft from the airline after it failed to clear its dues. Kingfisher had 64 aircraft in November 2011. The airline, which has accumulated losses of over Rs 7,500 crore, is also witnessing an engineer exodus. Anil Agarwal
Shareholders of Sterlite Industries (India) and Sesa Goa, both subsidiaries of the Anil Agarwal-promoted Vedanta Resources, have approved their proposed merger. A new entity, Sesa Sterlite, will be created after the merger. The restructuring will reduce the debt burden of the London Stock Exchange-listed Vedanta by about 61 per cent to $3.8 billion. Its debt service liability will come down to $180 million from $500 million. Still, Sesa Sterlite will have a total debt of about $14 billion.

ECONOMY
Prime Minister Manmohan Singh has taken charge of the Finance Ministry after Pranab Mukherjee resigned to contest presidential polls. Singh has set himself the task of reviving the "animal spirits" in the economy and put it back on track. An economist by training, the Prime Minister will look to attract capital flows, revisit aggressive tax enforcement, and turn the fortunes of the mutual fund and insurance sectors around. 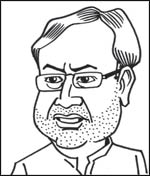 Bihar Chief Minister Nitish Kumar
Mamata Banerjee can learn a trick or two from Nitish Kumar. The Bihar Chief Minister has managed to get the Centre to double the state's special assistance package for the 12th Five Year Plan (2012-17) to Rs 20,000 crore. Bihar's annual plan for 2012/13 has been finalised at Rs 28,000 crore, a hike by 30.9 per cent over the last financial year. Kumar also secured a nod for a Delhi Metrolike urban rail network for Patna.

The government has allowed public sector oil companies to import crude oil from Iran, provided Iranian suppliers arrange for shipping and insurance. This follows a decision by European insurers to deny cover to vessels carrying Iranian cargo, from July.

$10 billion The new external commercial borrowing cap for manufacturing and infrastructure companies, within the overall ECB ceiling of $30 billion, is expected to spur investments.

$5 billion Coca-Cola's promised investment in India by 2020. The world's biggest beverage maker wants to expand capacity and improve distribution. India was the seventhlargest contributor to its sales volume in 2011.

MARKETS
The RBI has increased the ceiling on investments in government bonds by longterm foreign institutional investors such as sovereign wealth funds and multilateral agencies by $5 billion to $20 billion. It has also allowed Indian companies to make overseas borrowings of up to $10 billion to refinance rupee loans. The moves are aimed at arresting the fall of the rupee, which has slid by more than 21 per cent against the dollar over the last year.

The Securities and Exchange Board of India has made it simpler for promoters of listed companies to dilute their stakes through a share auction mechanism. All listed entities are required to have a minimum public holding of 25 per cent by August 2013.