Tech Talk: TCS CEO and Managing Director N. Chandrasekaran has reason to exult. In a tough year, TCS reported results in line with estimates, with profit after tax rising 14.6 per cent from the last quarter to Rs 3,318 crore, and reaffirming its position as India's top IT company. In contrast, Infosys failed to meet its dollar revenue guidance for the first quarter ended June 2012

CORPORATE
Another chapter has been added to the murky airlines story, with the controversial exit of Bharat Bhushan as Director General of Civil Aviation. Differences with Civil Aviation Minister Ajit Singh over the handling of Kingfisher Airlines, the action against errant pilots and airline safety, are cited as reasons. 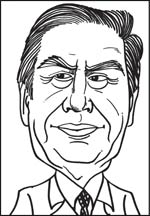 Ratan Tata
BT RETRO
ECONOMY
India and China are witnessing strong signs of a slowdown, while most developed nations are seeing moderate growth, according to the Organisation for Economic Cooperation and Development. The Asian Development Bank cut its 2012 forecast for developing Asian nations from 6.9 per cent to 6.6 percent. It has also cut its forecast for 2013 from 7.3 per cent to 7.1 per cent.

India's GDP growth will fall below the six per cent mark in 2012/13 and may return to the high growth path of over nine per cent only after the general elections in 2014, says a survey of corporates by Standard Chartered Bank.

Industrial production grew 2.4 per cent in May, driven by manufacturing output. Analysts had expected an increase of 1.8 per cent. It is a vast improvement over the figure for April, which was revised downwards to - 0.9 per cent from 0.1 per cent.

It was a fortnight of bold statements and retractions. P. Chidambaram, widely tipped to be the next finance minister, was alleged to have said that urban middle class people who can afford mineral water and ice cream should not complain about rising prices. Within hours, the Home Minister said he had been misquoted. Earlier Law Minister Salman Khurshid, commenting on the drift in governance, claimed Rahul Gandhi was only playing a cameo. Soon after, he claimed his statement was wrongly interpreted. 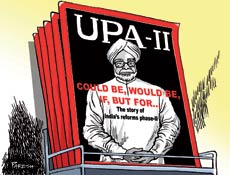 MARKETS
World oil demand will slow down in 2013 from its already weak growth in 2012, says the Organization of the Petroleum Exporting Countries. Europe's debt worries, a faltering US economic recovery and deceleration of growth in emerging markets have been cited as the reasons.

Coming Up
All eyes are on D. Subbarao with the first quarter review of monetary policy slated for July 31. There has been much speculation over whether the RBI Governor will lower the cash reserve ratio to improve liquidity. Indications that inflation will continue to stay high over the rest of the financial year will certainly be playing on his mind.

The finance ministry is planning to set up an exchange traded fund to sell shares of stateowned companies and meet the current financial year's divestment target of Rs 30,000 crore. Among those identified for divestment are Hindustan Copper, Oil India, SAIL, BHEL, HAL and RINL.