Song, dance and some mastiii edging up

A new music channel has sprung out of nowhere to challenge the biggies in a very crowded market. Mastiii, launched by Sri Adhikari Brothers, or SAB, Group last July, left the industry stunned as it zoomed to fourth position on the television viewership ratings in just three months, edging past the likes of Channel V. By the end of 2010, it was No. 1, leaving even MTV, B4U Music and 9XM, which had dominated the charts for years, behind. It may have slipped to third position, behind MTV and 9XM, in the first quarter of 2011, but it is clear the established players have a major challenge on their hands.

The channel promoters attribute their unexpected success to innovative programming. "The unique format, which combines music with humour, helped us get eyeballs," says Markand Adhikari, Vice Chairman and Managing Director of SAB Group. The channel intersperses songs with gags by stand-up comedians, Raju Srivastav and Suresh Menon. It has a team that thinks up 500 new jokes every month for the comedians, to provide one gag after every three songs. 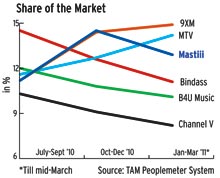 "Each music channel has its own positioning. Our unique concept has helped us stand out and attract a much wider age group than other music channels, which target only the youth," says Adhikari.

Says Prabha Prabhu, CEO of BMB India, which handles strategy and creative operations for Mastiii: "We highlighted the channel's uniqueness by clearly communicating how different its programmes were from those of other channels, be they saas bahu serials or reality shows or music shows."

But there are challenges aplenty for Mastiii as well. "The overloaded analogue system and the high carriage fee could be obstacles to our growth," says Adhikari. He feels the analogue TV broadcast system with its lower frequency has too many players and could face a space crunch in the future. The high carriage fee, or the fee that channels pay cable operators, is also a major financial burden.

"The subscription revenue and high carriage fee will pinch smaller players like Mastiii, as their absolute revenue is much lower than that of other players," says Amin Lakhani, Principal Partner at Mindshare Fulcrum. "Any music channel focusing on back-to-back programming and songs can deliver the numbers initially, but the challenge lies in monetising the viewership and finding the right balance once ads start coming in." Rajesh Jain, Managing Director of Prachar Communications, a firm specialising in media buying and selling, feels comparing Mastiii to channels like MTV is unfair.

"Mastiii's target age group is 30 plus, a far cry from that of other music channels that aim solely at the youth," he says. Jain adds that for all of Mastiii's success, he is not getting queries from advertisers about the channel and its rates.