Where the Threat Lies

The US elections are over and President Barack Obama is back. Congratulations to the President are in order for a hard-fought victory.

Obama's election manifesto was very clear: making education and training a national priority; building on the US manufacturing boom; boosting America-made energy; reducing the deficits by cutting expenditure where possible and asking the wealthy to pay a little more; and ending the war in Afghanistan, to do some nation-building at home. For this column, I limit my thoughts to the impact on the Indian information technology (IT) industry.

I have my own concerns about the re-election. While the election manifesto has appealed to large number of voting Americans leading to an Obama victory, we have to see what substantial changes the administration makes.

BAD NEWS ALL AROUND

America has seen the longest period of eight per cent plus unemployment in the last 70 years. The economy is weak, growth prospects are bleak and the deficit is rising.

Under such circumstances, Obama begins his second term. It is bad news all around. The effort the President puts in to work with Congress will determine which proposals become policies. 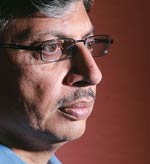 iGATE CEO Phaneesh Murthy
Interestingly, the only proposal related to jobs outsourcing was in Obama's 'manufacturing jobs plan' - he seeks to end tax deductions for companies shipping jobs overseas, and using the savings to create a new tax credit for those which bring jobs home. We have heard this rhetoric for a long time.

However, in reality, the complexity of the tax system will make this very difficult to implement. Companies, nowadays, are highly global in nature with their costs and revenues based on the availability of skilled resources and markets. It is very unlikely that, even if there is a change in the taxation norms the way the President wants, companies will move out of some markets.

Yet, this is not great news for the Indian IT industry. Over the last few years, we have seen a surge in the growth of captives in India. Many new companies have shown interest in investing in their own captives - several others have been consistently growing their existing captive set ups in India.

This way, they can still gain from sourcing global talent at competitive costs while abiding by the Obama mandate of not letting jobs go out of their fold. Should this continue, India's GDP will grow, but the IT industry, may not necessarily do so.

TROUBLE FOR INDIAN IT

The industry fundamentally depends on growing IT budgets of American companies. With record increases in health care insurance costs since the passage of Obamacare (Health Care for America Plan) and the overall sentiment in the US being poor, consumer spending will be watched carefully, particularly during this shopping season for the holidays.

This is also the budgeting phase for most US corporations. In the current mood, IT budgets are unlikely to go up.

With investment income very low and interest rates expected to stay down through 2013, both the financial services and insurance sectors are in a bit of trouble. These sectors account for over 40 per cent of the Indian IT industry. To top that, visa issuance under the Obama administration has been erratic and this too is bad news for IT companies.

I feel that the Indian IT industry has to wait for a recovery to happen before strong growth returns. Being an eternal optimist, I strongly believe that this is the right time for Indian IT companies to pass on the right message and offer the right proposition to US corporations.

We have to realise that mere cost arbitrage-based offerings will not fetch us dividends any more. With shrinking IT budgets, we have to move away from showcasing benefits out of hourly billing models. It is time to start offering services on an 'outcomes model' that clearly insulates US corporations against economic uncertainties. The faster we do so, the better.

'For the first time, we will develop in India, then export'