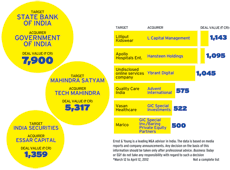 Click here to Enlarge
State Bank of India (SBI) has allotted 36 million equity shares of Rs 10 each at a premium of Rs 2,181.69 to Government of India on preferential basis. The bank, headed by Pratip Chaudhuri, has received around Rs 7,900 crore through this issue. The government's stake in SBI has now increased to 61.6 per cent from 59.4 per cent.

The second biggest deal is that of Tech Mahindra and Mahindra Satyam with the board of directors on both sides approving the merger of the two firms along with their wholly-owned subsidiaries. They have recommended a swap ratio of 2:17, i.e., two shares of Tech Mahindra (face value: Rs 10 each) for every 17 shares (Rs 2 each) held in Mahindra Satyam. The Mahindra Group will now own 26.3 per cent in the merged entity; British Telecom, 12.8 per cent; public shareholders of Mahindra Satyam and Tech Mahindra, 34.4 and 16.1 per cent, respectively; and the balance 10.4 per cent will be held as treasury stocks.

'When you enter a restaurant, your phone will start searching out people you know'