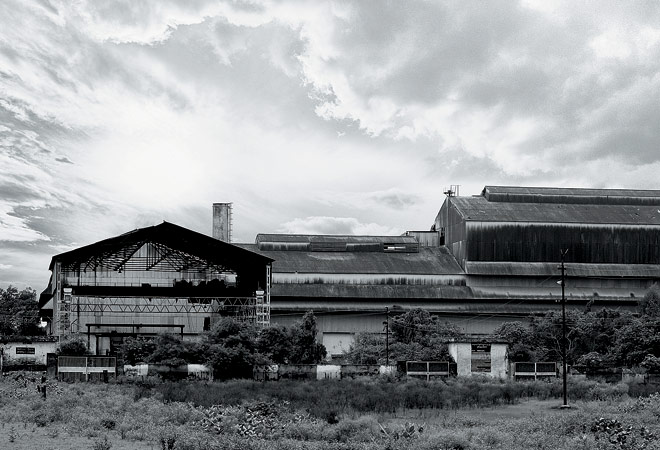 Balrampur Chini, India's second-largest sugar producing company, needs about Rs 2,200 crore a year to buy sugarcane, its main raw material. Of this, it raises about Rs 1,800 crore in working capital loans from banks, says Chief Financial Officer Kishor Shah. But raising money this year will be an uphill task for Shah because banks are reluctant to extend working capital financing to sugar mills in Uttar Pradesh, where Balrampur's all 11 factories are located.

Uttar Pradesh is the country's largest sugarcane grower and second-largest sugar producer. At the centre of the dispute is the price of cane that mills pay farmers. The cane price has been rising year after year. Last year, the state government fixed the price at Rs 280 per quintal, but mills said they could not afford to pay that price because sugar prices had remained stagnant for the past few years. Mills still owe about Rs 2,000 crore to farmers for purchases made in February and March this year.

To buy cane and meet other operational expenditure, mills usually take on working capital loans from banks. Earnings from the sale of sugar are later used to pay the interest and principal to banks. But banks became cautious in lending after the Allahabad High Court, in early September, asked mills to use the money they get from selling sugar to pay the amount due to cane farmers before repaying their loans. As a result, banks fear that mills may not be left with enough money to meet their loan repayment obligations. 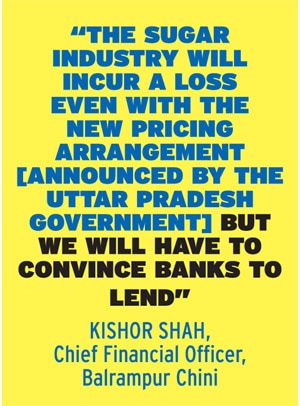 Sugar industry
On September 9, days after the court order, State Bank of India Chairman Arundhati Bhattacharya shot off a letter to Uttar Pradesh Chief Secretary Alok Ranjan suggesting a change in the state's cane pricing policy. She blamed the policy for mills' losses and said this would lead to mills defaulting on bank loans. K.R. Kamath, Chairman of Punjab National Bank, sent a similar letter. The two banks together have an exposure of Rs 5,000 crore to the state sugar industry. The total exposure of the banking sector is estimated to be around Rs 15,000 crore.

Banks haven't been able to convince the state government to change its policy stance. To make matters worse, the Supreme Court upheld the high court's order in October. Ranjan, the Uttar Pradesh Chief Secretary, says that there is no plan to implement the Rangarajan formula. "This formula is not acceptable as farmers will end up getting only Rs 220 a quintal," he says. Ranjan also dismissed Bhattacharya's suggestion calling it an interference with the policy matters of the state government.

The reason why the Uttar Pradesh government is averse to adopting a sugar-linked formula is that the cane price is often used as a political tool to woo farmers and their families, a large vote bank. However, a sugar-linked cane pricing system has worked in several other countries including Brazil, the world's biggest sugar producer, as well as Thailand and Australia. Within India too, major sugar producing states such as Maharashtra and Karnataka have opted for a sugar-linked price that ensures a reasonable return to millers.

For the current year, the state government on November 12 retained Rs 280 per quintal as the price of cane. The government did not implement the Rangarajan formula as desired by banks, but it has come up with a staggered payment mechanism and offered mills an incentive of Rs 20 per quintal. Mills will have to pay Rs 240 per quintal in the first tranche and Rs 20 per quintal within three months of ending crushing operations in March-April next year. In case the average sugar price between October 2014 and May 2015 stands at Rs 3,000 per quintal, mills will get an additional incentive of Rs 10 on every quintal of cane purchased and another Rs 10 if it goes down to Rs 2,900 per quintal. If the sugar price remains above Rs 3,100, some of the incentives promised will be adjusted downwards. Mills currently make Rs 3,100 to Rs 3,150 a quintal on sugar sales.

"We can only hope that the sugar price remains stable to enable the industry to make timely payment to farmers," says Ajay Shriram, Chairman and Senior Managing Director of DCM Shriram, which owns four mills in Uttar Pradesh. "We are taking the issue up with banks afresh since the initial cash outflow will now be Rs 240 per quintal of cane," says Shriram, who is also President of the industry group Confederation of Indian Industry.

India Economic Summit has to evolve to stay relevant