The new tax code proves the government is now convinced that the only way it can earn more is by taking less from people.

The finance ministers of the late 1960s and early 1970s must be turning in their grave. It was then that India had a peak income tax rate of 97.5%—beyond a level, for every 100 rupee you earned government took away Rs 97.5 as income tax. Perhaps American economist Arthur Laffer, who studied the inverse relationship between tax rates and tax collections, wasn’t even known as an economist then.

But Finance Minister Pranab Mukherjee's proposed new tax code proves that he is far more convinced with Laffer than predecessors from his own party. Since 1992-93, India has progressively reduced the burden of taxes—through a mix of reduced rates, restructured slabs and higher thresholds below which incomes remain tax-free. In doing so, successive finance ministers have faced severe criticism.

Finance Minister in the first UPA government and current Union Home Minister P. Chidambaram gave away the boldest rate cuts in the 1997 Budget, but was widely condemned for “serving the interests of the rich” by his own party men. The easing incidence, however, lifted the overall tax compliance as tax evaders who used to find rates prohibitive began to pay up.

Today, income tax collections are up from Rs 16,656 crore in 1991-92 to Rs 1,22,600 crore in 2008-09 (estimate), though not all of the seven-fold surge has come from improved compliance. High economic growth and the slow-yet-steady rise in cost of evasion have helped the taxman, too. The personal income tax-GDP ratio itself has nearly trebled to 2.6 per cent since 1991-92. It is this trade-off between tax revenues and tax rates that economists call the Laffer Curve. 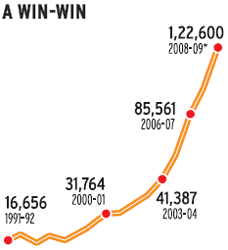 Between 1979 and 2002, more than 40 other countries, including the UK, Belgium, Denmark, Finland, France, Germany, Norway, and Sweden, cut their top rates of personal income tax successfully. Finance Minister Pranab Mukherjee’s endorsement of the Laffer Curve principle is even more gladdening since he also held the portfolio in the 1980s in the Indira Gandhi Cabinet, presiding over perhaps the most regressive tax regime.