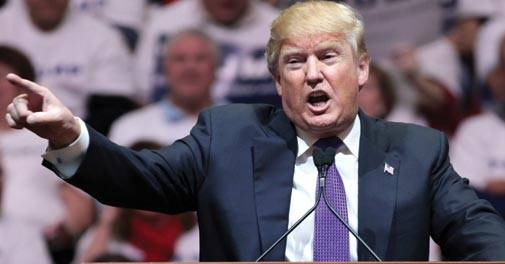 Had a warm conversation with President @realDonaldTrump late last evening", Prime Minister Narendra Modi tweeted on the morning of January 25, after the newly-elected head of the United States made a courtesy call to him. A following tweet said Trump had agreed to work closely with Modi to strengthen ties. Earlier, a White House statement said the two leaders discussed opportunities in economy and defence. Modi was the fifth leader Trump had called up after taking charge. Sadly, the feel good factor ended there. The US is critical for Indian IT and pharmaceutical sectors. Of India's $108 billion IT export earnings, over 60 per cent come from the US. Similarly, 33 per cent of Indian pharmaceutical industry's export revenues of $17 billion come from the US.

Days after Trump trashed the pharmaceutical industry and asked it to make medicines at home and reduce prices - hitting shares of Indian drug makers, for whom the US is a big market - came the next big shocker, this time for the IT industry. On January 31, the new US administration decided to pursue a Bill that can restrict the practice of companies outsourcing work to foreign workers. The High-Skilled Integrity and Fairness Act of 2017, introduced in the US House of Representatives, talks about doubling the minimum wage of foreign nationals on short-term assignments, or H-1B visa holders, from $60,000 to $1,30,000 a year. The Bill's aim is to encourage the hiring of locals. Shares of India's IT companies listed on the Bombay Stock Exchange slumped 3-5 per cent after the news broke. IT and pharmaceutical are India's two biggest dollar earners.

The Indian IT industry is the most frequent user of H-1B visas. Most big Indian IT companies, including TCS, Infosys, Wipro, HCL, Cognizant and Tech Mahindra, are heavily dependent on the offshoring model to serve the US market. The impact of higher wages on bottom lines, say some analysts, could run into a couple of billion dollars.

It is not just services. Almost every decision taken by Trump during his first week in office indicates the protectionist path the US, the world's biggest market for goods and services, plans to take. For instance, among Trump's first decisions was pulling out of the Trans Pacific Partnership, or TPP, a mega trade pact the US had been trying for forge for years. He also plans to renegotiate trade deals with other countries. The aim is to bring factories and jobs lost to free trade back to the US. To make sure that Americans benefit from infrastructure projects, he also signed an executive order requiring companies to use US materials and equipment in construction/repair of energy pipelines. Experts say if this trend continues, India's goods exports might also be hit. The US is, after all, India's biggest market for goods. India earned $40.3 billion (over 15 per cent of its merchandise export earnings of $262.3 billion) from the US in 2015/16.

Industry lobby group National Association of Software and Services Companies (Nasscom) says India's top seven IT firms, which use about 90 per cent of India's H-1B visa quota, account for only 13 per cent share of total H-1B visas given in a year. In other words, most H-1B visas are allocated to US-based or other global companies. Nasscom says in most cases - and this applies to Indian companies too - low wages are not the main reason companies opt for the H-1B route. "The minimum wage of $60,000 is old. The companies pay more. It is not correct to assume that H1-B is meant to bring in cheap labour," says Shivendra Singh, VP, Global Trade Development, Nasscom. The companies go for short-term visas due to supply-side constraints (shortage of skilled workers), he says.

"The Department of Labour statistics say that by 2018, 2.4 million STEM (science, technology, engineering and mathematics) skilled jobs will remain unfilled in the US. More than 50 per cent will be in the IT and computer industry. We are only bridging the skill gap," he says.

Nasscom President R. Chandrashekhar says they will meet US policymakers to explain how the Indian IT industry helps keep their economy competitive. They will also talk about the taxes they pay and the jobs they create locally. Nasscom says India's IT industry provides 4,11,000 jobs in the US. It also provides technical services to 75 per cent of the Fortune 500 companies and is in that sense, part of the larger job creation ecosystem in that country.

For the moment, though, most large Indian IT companies are playing safe and preparing for all contingencies. Vishal Sikka, the CEO and MD of Infosys, has expressed cautious optimism that Trump, being a businessman himself, will be business and innovation friendly. He has also emphasised efforts to step up local hiring.

If IT drives India's services exports, drugs and pharmaceutical is the most promising segment in our merchandise export basket. It is only behind the high value gems and jewellery sector in terms of revenues. According to the Pharmaceutical Export Promotion Council, out of India's total pharmaceutical exports worth $12.5 billion, about $8 billion (10 per cent of the US generic drug market) were to the US.

However, there is a silver lining too. The new US administration is moving to scrap the Patient Protection and Affordable Care Act, also known as Obamacare. In the absence of state-sponsored health care, US citizens will have to make out-of-pocket payments, which makes affordable health care Trump's immediate priority. "Abolishment of Obamacare means rise in dependency on affordable medicines. When it comes to pricing, no one is as competitive as Indian drug manufacturers. We need to convey the message that we are importing from India to save the US from high health-care expenses," says D.G. Shah, Secretary General of the Indian Pharmaceutical Alliance, a select club of large domestic medicine makers. The decision to dump the TPP is also a blessing in disguise for Indian drug makers as some intellectual property provisions in the deal were not in their interest. Indian drug makers have invested about $7 billion in creating assets and jobs in the US in the past five years.

The industry is now pinning hope on the prime minister to build on the goodwill created by the courtesy phone call to drive home the point that an India-US alliance can be mutually beneficial.

Here's how much Reliance Industries has spent on Reliance Jio