Ensuring electricity access to all households is a great political move but might derail the fiscal reforms undertaken by Discoms. 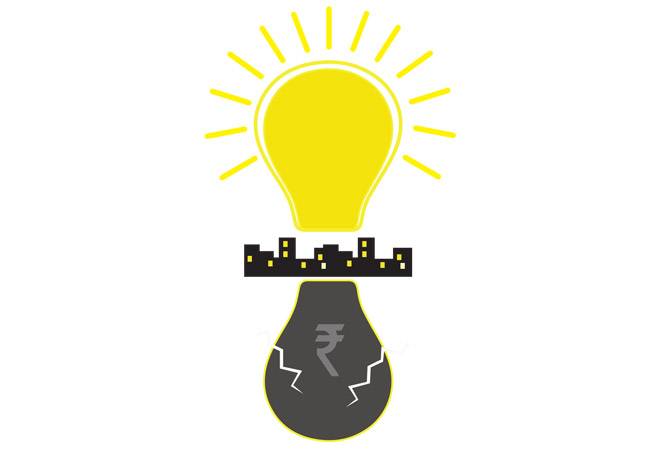 Over the next 14 months, the government wants to illuminate every home in India - that's a staggering 4,05,11,995 households. The move, however, might just end up plunging into darkness power distribution companies, or Discoms, already struggling to implement fiscal reforms under the Ujwal Discom Assurance Yojana (UDAY).

The ambitious Saubhagya (Pradhan Mantri Sahaj Bijli Ghar Yojana), which Prime Minister Narendra Modi announced on September 25, is politically sound, but for distribution companies, sheer logistics make it virtually impossible to finish the task in the given time-frame.

There are several reasons for this. Nearly 95 per cent of these homes are in rural or remote areas and get subsidised electricity. Discoms balance their losses on these subsidies with higher tariffs for industrial and commercial units. Assuming eight hours of power (one KV load) in each new electrified house, the additional demand would be 80,000 million units each year, necessitating the creation of additional capacity of 28 Megawatts. To even out the expected revenue loss, India would require commercial and industrial units to consume at least 55,000 million additional units in the next 14 months, an unlikely scenario.

The average rate of electrification at present is 9,288 households per day. To ensure that the government's commitment is met, Discoms would need to electrify at least 87,311 homes daily. This means Discom employees across the country would have to work at ten times their current speed, continuously, for the next 425 days, with no break. An unrealistic expectation, by any standards, though experts insist it can be done. Of the 18,452 villages where there was no power, electricity has already reached 14,486 in the last 13 months.

Power ministry officials say, in the remaining 3,966 villages, electrification would be relatively easier because only end-point connectivity is needed. "Some families were living technically outside the village perimeter, some did not have BPL (Below Poverty Line) cards, and some did not have the know-how to apply for an electricity connection. The additional funds pushed in by the government - Rs 4,000 crore as special mid-fiscal supplementary gross budgetary support will help speed up last-mile connectivity to such households," an official spokesperson said.

That, however, is easier said than done. Discoms would be now under immense pressure to provide electrification to "low-paying customers" - free connections for BPL and in 10 EMIs for above poverty line families. Budgetary support only pays for infrastructure creation and the free connections.

Even supplying electricity to these additional homes will be a nightmare for the distribution companies. The original blueprint for electrification was that all villages would be electrified by May 2018. Electrification of individual households would have then commenced, on a premise of better infrastructure. At this juncture, most states haven't been able to meet even their commitments to reduce losses.