Shyam Saran, Special Envoy of the Prime Minister on Climate Change, discusses some of the criticisms levied against India on its stance on climate change. 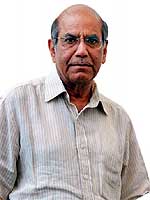 Shyam Saran, Special Envoy of the Prime Minister on Climate Change, discusses some of the criticisms levied against India on its stance on climate change. Excerpts:

Has India buckled under pressure from the developed world on climate change?
It is true that the figure of limiting rise in average global temperature to 2 degree Celsius was mentioned for the first time in our recent statement. This merely refers to the prevailing scientific opinion. However, it is not a statement made by India alone. Sixteen other major economies have made it. Our stance is clear that no ambitious action on climate change is possible without developed economies bearing their share of the burden.

India says it will not exceed the per capita emissions of the developed world. How sustainable is this position?
The projection of India as a problem nation is not true. Annually, on a per capita basis, India does not release even 2 tonnes of carbondioxide equivalent, while the developed world has in some cases almost 20 tonnes per person. The energy intensity of India’s economic growth is very low, which is true of very few countries. In any case, it is to our advantage that we reduce our dependence on fossil fuel because we import 70 per cent of our oil requirements. Curtailing the use of fossil fuel does not contradict our larger energy security goals.

What do we want from international agreements on adaptation or mitigation?
Funding for climate change cannot be considered in the nature of an overseas development aid (ODA), which typically follows a donordriven approach. If there is a significant action for ambitious outcome, then it cannot be less than 0.5 per cent of the developed world GDP. As far as scrutiny of the funds that India receives on such an account is concerned, we have no problem. But we do not believe that our overall economic planning or national climate change plans should concern others. No one else can prescribe our development or energy goals.

30%: The percentage of Indian firms that will expand their workforce by December 2009.

17 mn: The number of Indian mobile phone users added in June. Now the total number of users is 427.28 million, as per data released by the Telecom Regulatory Authority of India.

338 mn: China’s online population in 2009, the largest in the world and, in fact, more than the entire population of the United States.

Rs 12,434 cr: The money the Airports Authority of India (AAI) plans to spend for modernising airports and air traffic services in India during the 11th Plan period.