Searching for a voice

Mukesh Ambani's Reliance Jio was focused on data and 4G. Then why is it bidding aggressively for 2G spectrum?
Sunny Sen | Print Edition: Mar 2, 2014 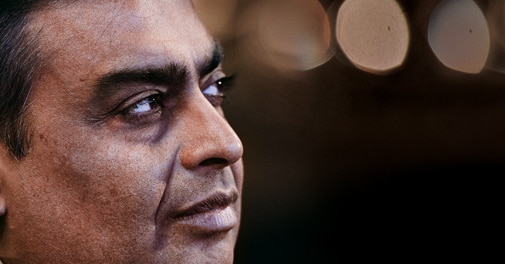 It was hardly a surprise when the pre-bid list of participants in the latest spectrum auctions included Mukesh Ambani's telecom venture Reliance Jio Infocomm. Since 2010, when, after an interval of five years, Ambani re-entered telecom, competitors and analysts had wondered why he chose to focus on the niche wireless data business. It may be the fastest-growing business in telecom but it has a very small base.

"Although no operators have been named, we believe that (based on earnest money deposited) the leading operators in the auction are likely Idea Cellular and Rel Jio, along with the incumbents Airtel and Vodafone," said a Goldman Sachs report after the first day of the auctions, February 3. At the end of the fifth day of the auctions, the total bid amount had crossed Rs 55,000 crore.

But why does Reliance Jio need the spectrum, when its initial plan was to remain a nationwide data operator in the world's fastest-growing Internet market with 200 million users, mostly on mobile?

It is simple: India is still a dominant voice market. Voice contributes 87 per cent of all operators' revenues put together. LTE-led 4G data services still don't have a proper device ecosystem for consumption. (LTE stands for long-term-evolution, the fourth-generation (4G) technology Reliance Jio is using to deliver data.) Indeed, Reliance Jio is struggling to find device partners. With voice, it can instantaneously scale up operations and later introduce high-end data services to existing customers, creating a dual revenue stream.

Just before the auctions began, Srinivas Rao and Amyn Pirani, research analysts with Deutsche Bank Markets Research, wrote in their report: "(Reliance Jio's) objective in participating in the auction could be two-fold: acquire spectrum to roll-out voice service as an adjunct to data on TD-LTE, and potentially raise the acquisition cost of spectrum for its competition." Experts say that the 4G broadband services business will take at least another three to four years to find its feet. Airtel, for instance, has broadband wireless access (BWA), or 4G, spectrum in eight circles but has less than 10,000 customers using its services. Building a roadmap
Voice does not always seem to have been Reliance Jio's initial focus. After Reliance Industries Ltd (RIL) bought a 95 per cent stake in Infotel Broadband for Rs 4,800 crore, the company had been busy designing a roadmap for its foray into telecom. Infotel Broadband had acquired BWA spectrum in all 22 circles.

The topmost priority for Reliance Jio (as Infotel Broadband was later named) was to put in place a strong team. It has not yet disclosed the roles and designations of  its senior management. but some names can be identified. Manoj Modi, for instance, an old Reliance hand, has been brought in. He was responsible for launching the mobile business of Reliance Communications (RCom) before the two brothers, Mukesh and Anil, parted. Sandeep Das, Maxis Communications' former CEO, is also part of the team while Kiran Thomas has been shifted from the retail business to telecom. Arvind Rao, former CEO of OnMobile, is expected to play an important part in the data business and Sumit Chowdhury, former IBM executive, is said to be putting together the technology for the venture. The technology back-end is being stitched by IBM, says an executive who provides telecom equipment to Reliance Jio. IBM is also Bharti Airtel's outsourcing partner, and was crucial in bringing down the company's operational cost sharply over a decade and more.

If data is the future, Reliance Jio has its eyes set on it like none other. It has put together a team of more than 500 application developers, based in the US and India. The developers work on new applications which will go into the mobile devices once they are out in the market. Infrastructure is another key focus area. Reliance Jio has partnered with Airtel and RCom to share infrastructure - fibre network, towers and undersea cable to connect with other countries. "The arrangement could, in future, be extended to roaming on 2G, 3G and 4G, and any other mutually beneficial areas relating to telecommunication," said Reliance Jio in a press release on its tie-up with Airtel.

Reliance Jio's twin play
While Reliance Jio is building a robust network and solution for data services, it seems to have realised that it was important to build a footprint in the voice business as well. The company has not yet revealed how it will integrate both voice and data but past experience suggests that it could be a disruptor.

In 2002, RCom, with Ambani at the helm, began a price war with its Monsoon Hungama scheme, the bundled service (mobile device and calls) starting at Rs 500. It was an attractive proposition, and competitors were forced to cut call charges in response.

After the auctions, analysts expect Jio to compete directly with the likes of Airtel, and Idea Cellular. Another report by Goldman Sachs says: "Rel Jio acquiring 900 MHz and 1800 MHz will likely impact Bharti and Idea more as that would imply a much more robust business model for Rel Jio with both coverage and capacity spectrum, thereby helping it launch superior quality traditional voice offering along with 4G data offering."

mosimageReliance Jio has 2,300 MHz spectrum, which is only good to deliver data. The two other bands being auctioned can be used for LTE, voice and 3G services. The 2,300 MHz spectrum band also has in-building penetration issues. Reliance Jio is working with equipment makers to provide boosters which will enhance connectivity inside buildings on the 2300 MHz band. In any case, with the new spectrum, Reliance Jio will be in a better position to provide in-building services. "The idea (of Reliance  Jio) is to have one provider for everything inside a home - voice, broadband and television," says a senior Telecom Regulatory Authority of India official, who met Ambani a few months back. Airtel is the only company in India providing all three.

With an annualised net profit of more than Rs 21,800 crore in 2013/14, and cash and cash equivalent of Rs 88,705 crore, RIL has a strong balance sheet. The executive of an equipment company, who is a vendor for Reliance Jio, says that the total investment for the telecom venture by Mukesh is between Rs 50,000 crore and Rs 60,000 crore. This makes Reliance Jio India's largest telecom start-up.

Ambani is back in telecom. Will he spark off a new tariff war? Rivals and experts largely feel he will not. But no one knows for sure.

Why power supply continues to be a problem in India

On Record/Satya Nadella takes over as Microsoft CEO