Battling It Out: It's bad times for IT companies, especially smaller firms

Smaller IT services companies are finding the going hard, with just a few exceptions.
By Venkatesha Babu | Print Edition: July 16, 2017 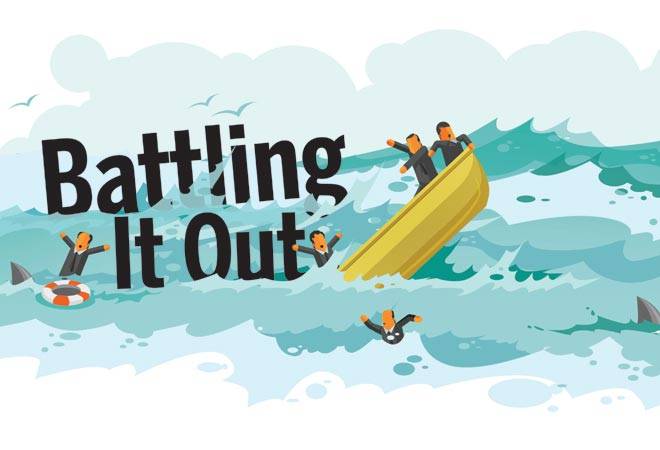 Amid-sized retailer in the US was recently looking for a vendor to maintain a back-end computer application. The contract size was not large, just $40 million, spread over seven years. So, imagine its surprise when its request for proposal (RFP) got an overwhelming response. But the real surprise was aggressive wooing by one of India's largest IT companies, which in the past would have not given such a contract any attention. In fact, a senior vice president even spent time with the retailer's chief technology officer. Finally, the large Indian IT company priced itself in such a way that the smaller vendors had no chance of getting the deal.

This perfectly sums up what is going on in the Indian IT industry, where the struggle to grow and survive is making companies brush aside many of their old assumptions and calculations. Rajesh Gupta, India Partner at ISG, a global technology research and advisory firm, which acts as an intermediary between customers and IT services players, says he is not surprised at the price aggression being displayed by the larger players. This hunger to win even the not-so-big projects, and that too after compromising on the price, is driven by a number of reasons. The biggest is the buffeting of Indian IT players by the shift to automation, digital and cloud - areas where they are not at all strong - and visa and other restrictions in their big markets such as the US and the UK, forcing them to reinvent delivery models. Worse, their traditional work such as AMD (application maintenance and development), testing and validation, and package implementation, has been largely commoditised - price alone is becoming the sole determinant for winning contracts of this nature.

Players, both large and small, have been hit, with the $153 billion industry managing to grow exports by only 6-8 per cent in 2016/17, according to industry body Nasscom. This is a sharp fall from the 12-14 per cent growth only a couple of years ago.

In all this churn, the smaller players are getting squeezed more than the larger ones. The bigger players (with more than $1 billion revenues) are somehow finding the resources to invest in platforms, products, start-ups and acquisitions. They are also flexible on pricing and have the money to hire locally (onsite) to blunt political attacks on them for taking away developed country jobs. And last but not the least, they have the wherewithal to cope with the structural changes happening in the industry.

The smaller are either stagnant or growing at rates that are significantly lower than the industry average. "Ideally, one would expect that the smaller players would grow faster because of lower base. While scale is not as big an advantage as it was earlier, many smaller players are struggling as they have very little competitive differentiation. Their only USP was price and now the larger players are willing to undercut them when required," says Gupta.

Take Mphasis, once hailed as the next big thing in Indian IT. Right now, it is struggling to grow, and has had four new owners in the past decade. At present, it is owned by private equity investor Blackstone Group. Compared with 2015/16, its revenue from operations marginally dipped in 2016/17. Its plight is not unique. NIIT Technologies, Zensar Technologies, Polaris Consulting & Services, Sasken Technologies, 3i Infotech, KPIT Technologies and other smaller players also grew in either low single digits or contracted in 2016/17.

Rostow Ravanan, CEO and MD of MindTree, however, says it is incorrect to paint all Tier-II companies with the same brush. "Size by itself is neither an advantage nor a disadvantage. Look at what happened to some of the largest animals on earth. Also, some large companies such as TCS have executed very well. It all boils down to strategy and execution."

MindTree grew about 11.65 per cent last year. Ravanan says their focus is on four verticals - hi-tech, hospitality, retail and financial services. He says even in financial services, the company focuses more on insurance and even there in property and casualty insurance. "We have said no to BPO, telecom, energy and utility, health care and so many other verticals. Specialised firms that can add value will continue to do well irrespective of their size."

The CEO and MD of Zensar, Sandeep Kishore, concurs: "I don't think size alone is the key. For instance, I believe, our size is right, large enough to scale up and small enough to care for our customers. We have been investing in digital, which, I believe, has started paying off. Digital is a business transformation opportunity, which I think right-sized players like us are nimble and agile to seize for the next phase of growth."

Similarly, Mritunjay Singh, Executive Director and President (Services), Persistent Systems, says his company gets about 28.4 per cent revenue through IP Lead offerings. He says this differentiation makes Persistent important to clients and ensures it stays competitive.

Sid Pai, an industry veteran and Managing Partner of Tekinroads, a research and advisory firm, is not too sanguine about the prospects of most smaller players. "It is relative exposure to newer technologies rather than size which will determine survival. A lot of companies are hiding behind the digital nomenclature. Most of them work on old technologies and have a factory worldview. Even some larger players suffer the same malaise, but given their resources, they may get more time to change course. The next four-six quarters will see the weeding out of the weaklings. Smaller players will face bigger challenges."

The MindTree CEO, however, says that resources are not a constraint even for the smaller players. "Capital is easily available today unlike in the past. Survival is more about strategy and execution."

Rajesh Gupta of ISG says some smaller players might focus on segments such as mainframe applications that are relatively harder to move to the cloud. While this may hit margins, some of them will survive. "But there are other threats such as talent flight. Who wants to be associated with companies working on yesterday's technology and that too, if they have little or no growth?"

After the first wave of consolidation where the likes of iGate, Mphasis, Geometric and Patni were acquired, the Indian IT sector seems to be ripe for its second wave of consolidation. Unless the smaller players focus on specialisation and build a moat with domain knowledge, they are in for more rough times.