From mining to real estate to stock market, NRIs are keen to invest in India. Can the government seize the moment? 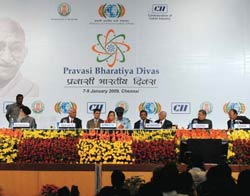 Satyam: a Rs 7,000-Crore lie’ screamed the morning newspapers as hundreds of nonresident Indians (NRIs) from different parts of the globe gathered to attend the seventh Pravasi Bharatiya Divas in Chennai. The overcast sky and the intermittent drizzle outside, in a way, symbolised the gloom inside the convention centre, no doubt exacerbated by the global economic meltdown and the recent terror attacks in Mumbai. But the assembled NRIs were, indeed, looking at India and the global economic crisis differently—seeing an opportunity as many other nations show signs of recession.

I catch up with Anand Ramlogan, a barrister from Trinidad & Tobago, a fifth-generation immigrant from India. He tells me: “India has remained insulated from the global economic crisis so far. A 7 per cent GDP growth in this climate is phenomenal.” Is he looking at business opportunities in India? “I have begun investing in the Indian securities market. Valuations are low despite strong fundamentals. It is also well regulated. So is the financial system. That is comforting,” he adds.

‘Paul’ Pornthep SriNarula
Ramlogan is not alone. Desh B. Sikka, a geologist, who left India in 1974 to work in Canada, now wants to return as an entrepreneur and is looking at investing heavily in mineral exploration and mining development. He wants to start a mining labour training school in India. “There is huge potential in India for geological prospecting and mining. With a billion-strong population, 65 per cent of it below the age of 30, demand for metals will only increase in India. There is an urgent need for bringing in modern technologies into mining and the government should open up the sector,” he explains. ‘Paul’ Pornthep SriNarula, CEO, Syncate Company Ltd., is also scouring for investment opportunities. He runs a 35 storied service apartment comprising 390 apartments in downtown Bangkok and has plans to set up a service apartment in Delhi where he owns property. “Though current conditions may not be ideal globally, India is a great place to invest now as the investment will be ready to earn when the economic cycle turns around,’’ he tells me.

Anand Ramlogan
Says Shashi Tharoor, former UN Undersecretary General and currently Chairman of Afras Ventures, a firm involved in attracting foreign investment into India: “The willingness of NRIs to contemplate investing in India has not diminished. They realise that India will recover faster than the West and returns available here are far more attractive than in most markets.”

If the sale of publications on taxation and FDI—brought out by Overseas Indian Facilitation Centre at the conference is any indication, interest in India is, indeed, strong. In one day, 500 copies of these publications were sold out. “We did not anticipate such a demand,” admits Harmit Singh Sethi, CEO of the centre, which was set up by the government and CII to facilitate NRIs who are keen to set up business in India.

Shashi Tharoor
It is important for India to employ the NRI wealth more prudently, points out Gopinath Pillai, Chairman, Institute of South Asian Studies, Singapore. Unlike the overseas Chinese, who are very entrepreneurial, Indian diaspora consists of professionals who are more risk averse, he says. That explains why compared to China’s 60 per cent, diaspora’s share in India’s overall FDI is less than 5 per cent. NRIs send a lot of money—but as remittances (estimated at $40.70 billion or Rs 2,03,500 crore in 2008—the highest in the world) which is used to buy unproductive assets such as houses or left in NRI deposits.

Desh B. Sikka
If the government makes the right moves, it could tap NRI wealth for India’s development. It is not small by any standards. Numbering over 30 million, Indian diaspora’s combined annual economic output is estimated at $400 billion (Rs 20 lakh crore)—almost 40 per cent of India’s GDP! The conference probably happened at just the right time. India’s unique and intrinsic strengths coupled with better economic growth have triggered an enhanced interest among NRIs looking at business opportunities here. The ball is now in the government’s court to take advantage of this development through appropriate policy measures.
TweetYoutube

Time for a trim