Europe will be difficult for Indian IT companies: Andy Green

Andy Green, CEO, Logica, speaks to BT on the road ahead and his plans for Logica at a time the market is in turmoil.

Soon after he shifted to a non-operational role at BT (formerly British Telecom) after a two-decade stint,Andy Greenwas called up for active duty by IT services company Logica in January 2008. Green, 53, has a challenging task at hand, despite his impressive credentials as a buyer and seller of IT services and as the man who grew BT Global Services’ revenues from £4 billion (Rs 33,956 crore) to £9 billion (Rs 76,400 crore) in the last four years. Green’s predecessor in Logica, Martin Read, was forced to quit in May last year by angry shareholders, after announcing profit warnings and “embarrassing” cost overruns for a large UK project. Nine months into Green’s stint, the global financial services companies are delaying, postponing or even cancelling contracts. The European IT market, Logica’s mainstay, is growing in single digits. While Green has managed to ensure shortterm gains for Logica, more softness appears to be around the corner. Unlike its North American peers, Logica has had mixed results with offshoring to India (and other locations) in the last few years and its efforts are only just falling into place. As the global economy appears headed for its worst slowdown in decades, Green discusses the road ahead and his plans for Logica with BT’sRahul Sachitanand. Excerpts:

Andy Green
Why did you join Logica? What was the attraction?
My background is in services, especially with telecom and network management wrapped around it. This is a great opportunity to lead Logica and I am really excited… I was acutely aware of the dynamics of that industry, where moving to a blend of offshore and onshore delivery is a much more complex issue than (it is in) North America or even the UK, because there are issues of language, culture and time. The model needed was of a company with a strong onshore presence—German people in Germany, Finnish people in Finland, French in France—working as a single team with other teams in India, the Philippines and Morocco to drive IT services for clients.

Personally, I saw it as a real opportunity. Although there is a strong feeling among many service providers that the story of the US and UK will be repeated across Europe, in practice, it is going to be much more difficult.

The day you started at Logica, the company’s share price jumped 10 per cent. Clearly, the market seemed to be happy having Andy Green on board. However, critics say there are things that need to be changed and the company needs some re-invention. What do you think?
Look, there are things that need to be changed, there is no doubt about it. Logica is technologically a fantastic company, and delivers value for its customers. But, it’s not a great sales and marketing company. It definitely needs to sell and market itself much more. One of the things I have done is put in place a plan to reduce overhead costs, but increase substantially the money spent on sales and marketing. We have committed to our shareholders to grow faster than the market.

The other thing is that we started very well with the global delivery mechanism—in 2005-06, the Bangalore centre grew from virtually nothing to 3,000 people, but in 2007, it had a poor year and did not develop that edge. I have energised that again and we have added 400 people this year. I am here in India to open our second India centre in Chennai and a mobile innovation centre in Bangalore.

You were speaking about being both a buyer and seller of IT services at BT. What skills do you bring to Logica?
I am really lucky. I have a really unique pedigree… at BT Global, I grew revenues from £4 billion to £9 billion and won major contracts from the likes of Unilever, Reuters and the National Health Service. That gave me the experience of selling and managing large-scale services contracts. I was also responsible for managing the internal IT and network of BT. I have a long-term involvement with the Indian IT industry. I was at one time Infosys’s and TCS’s largest customer and I was responsible, along with Anand Mahindra, for really putting Tech Mahindra on the map and floating the company on the BSE. So, all these experiences put me in a good position to run Logica.

The European market is growing really slowly and there have been some dire reports that project a decline in IT spending and even of companies cutting back projects. Where does the market stand?
The (European) market is a good market for us. The first thing we must say is total IT spend in the US and Europe has been declining for many years—in other words, it has grown less than GDP. But, on the other hand, IT services are growing faster than GDP, because CIOs are giving more work to their vendors and doing less work in-house. Secondly, they favour the larger services companies, because they want to transfer risk. The larger service providers are growing market share. I think it is possible to grow 5-7 points above GDP as a large services provider in Europe.

You seem to have kick-started growth for Logica, but there seems to be some softness predicted for the overall market in the next few months. Are you worried about that?
We are sitting here today and have just heard that Lehman Brothers may be going bankrupt (it has since filed for Chapter 11 bankruptcy protection) and of Merrill Lynch being bought by Bank of America. In these circumstances, any CEO has to be thoughtful about the future. We should be thoughtful about what will happen as people reset their budgets in 2009, we will see what turns out. This is a very uncertain market time.

How do you think the IT market will evolve? On the one hand, you have the large North American players such as IBM and Accenture and on the other you have the Indian upstarts. Where does a company like Logica figure in this and are you getting squeezed out in the middle?
Far from it; I don’t think so. We have 40,000 people and we’re focussed just on the European market, unlike the others who are globally dispersed. This is really important to understand. Many of the other players are spread across the world. The diversity of Europe, the language differences in particular, gives us an opportunity to be closer to our customers. There is a definite place for Logica. In the European market, the Indian players are very small. Many clients don’t feel comfortable with the language and cultural differences, and hesitate to work with them. We take decisions close to customers. It is important to understand how fragmented the market is. IBM, the market leader, has a share of just 8 per cent.

What is the mission to revitalise Logica all about?
We are investing in areas where customers will see growth. The Spark Innovation Centre we opened in Bangalore, for example, is all about mobile solutions. We’re moving £5 million (Rs 42.45 crore) from the back office to front office from 2007-10. We are spending £8 million (Rs 67.9 crore) on offshore centres, opening a Chennai centre and expanding in Bangalore.

We want to be a cash generating business and we want to increase our net margin by 0.5 per cent next year and by about 1 per cent by 2010. That will take us to being among the most profitable IT companies in the world, outside of those based in India. 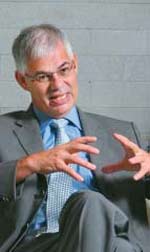 Andy Green
You have also spoken about inorganic growth and Logica has made two large acquisitions recently—WM Data and Unilog. Do you continue to look at this strategy? Will Logica itself become an acquisition target?
Well that’s a big question. All CEOs would say: “We are here to serve shareholders.” There is an enormous opportunity in keeping Logica as an independent company. I intended to operate in the shareholders’ best interests to create a valuable property. Then, if someone wants to buy it, we will have to wait and see. In terms of our own acquisition strategy, we’re very much focussed on small deals to refine our business. We’re focussed on taking what we’ve got and turning it into a profitable business.

How well has India been able to graduate from being a low-cost vendor of IT services to a provider of high-value innovation? Can you give us some examples of innovation by Logica in India?
I think the growth is coming. You can see it in some American firms and you can see it in Logica. It is about innovative ideas and bringing together smart people to look for new ways to do business. At Logica Bangalore, we are working on technology where vehicles can automatically intimate emergency networks when there is a crash. We are also working on payments on mobile phones and ads to phones using user-data from social networking sites such as Facebook.

Given the chaos in the US financial services market, Indian companies see Europe as the next big frontier. How difficult do you think it will be for them to make the transition?
It will be much more difficult than they think it is going to be. They should pick one country at a time and focus on it. Even I don’t pretend to operate everywhere; we don’t have a large business in Italy, for example. The UK is so like the US; it is easier to get confused into believing that you can extend your business across Europe.

After 21 years with BT, everyone expected you to take the easy route and perhaps opt for a cushy consultant’s job and slowly seep into retirement. But you’re back in the limelight. How far away is retirement now?
Retirement is now many years away. I tried to do that. My plan was to take the easy route out, but I really decided I love the cut and thrust of monthly results and quarterly ambitions. I’m enjoying my experience of revitalising Logica.