Om Prakash Pathak, Managing Director, Munnalal Sons & Co., is the current head of the 97-year-old family-owned attar (oil-based fragrance) manufacturing business. There are, however, no grand celebrations planned three years down the line to mark the company’s centenary—for one, there’s not much to celebrate, he says, and for another, it pays to remain low key in this business. This, from a man who’s politically well-connected—his son, a BJP activist, is angling for a Lok Sabha ticket from the district for the general elections due next year. Pathak, however, is not the only one feeling the pinch of the attar industry’s downslide. Jagat Narain Kapoor, the 87-year-old patriarch of Jagat Aroma Industries, a leading attar manufacturer till a few years ago, has shifted completely to exports. 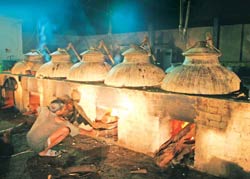 A whiff of past: Attar being processed in copper urns
“The cost of raw materials, as also lack of easy availability, ultimately made us realise that sourcing products was far easier than making them ourselves,” says Kapoor, Managing Director, Jagat Aroma Industries. Today, Kapoor’s bread, butter and marmalade come from his export earnings, though there’s a token presence of the family concern in manufacturing.

The cases of Pathak and Kapoor typify the conundrum faced by attar manufacturers in Kannauj, who have been grappling with low volumes in a high-margin business— where profits were 900 per cent of costs compared to the tame 10-20 per cent these days. The product itself has undergone a radical transformation and bleeds 15-20 per cent of its market share annually as the prohibitively high selling price of the final product makes consumers—both retail and bulk— shy away. Says Abdul Malik, Managing Director, Mohammad Ayub Mohammad Yaqub Perfumers, Kannauj’s largest exporter and one of the biggest manufacturers of attar (it produces more than four tonnes every month): “Most manufacturers, including us, have replaced the sandalwood oil base with either liquid paraffin or DOP (dioctyl phthalate, a chemical compound) as there is a huge difference in the input costs of the final product—Rs 90,000 per kg for sandalwood compared to Rs 10,000 per kg for liquid paraffin.”

So, while earlier—about six years ago—the ratio of attars based on sandalwood oil vis-à-vis liquid paraffin/DOP was 80 to 20, today, it is 10 to 90. It’s a different matter that DOP is a known carcinogenic agent, a fact acknowledged by the attar makers themselves, but they have no qualms in using it.

Flower to fragrance: A worker empties jasmine flowers into copper urns
That, however, is not the only dubious business practice followed by the attar makers of Kannauj. Sandalwood is legally available only through auctions and most of it is exported due to better prices in the overseas market. Attar manufacturers admit they do resort to clandestine procurement of the famed wood as the quality and quantity of supply through official channels is poor. According to Kapoor, about 90 per cent of the sandalwood used in Kannauj’s attar manufacturing industry is smuggled.

Of the total attar output, nearly 90 per cent is used as flavouring agents for tobacco products. The remainder is either exported or sold in the domestic market. It’s a dangerous dependence on one sector and one that can capsize the industry should tobacco go out of flavour—a risk acknowledged by the attar makers themselves. “But there’s no alternative for us. Earlier, we pandered to the tastes of royalty. Post-Independence, the industry sustained itself by supplying attar to select industries, notably incense stick manufacturers and soap makers. And when they cut costs, it was the tobacco industry that came to our rescue,” says Pushpraj Jain, Managing Director, Pragati Aroma Distillers, which produces about 30 tonnes of attar annually. 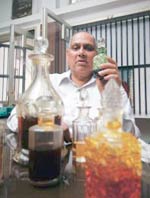 Mohammad Ayub
Of the Rs 1,000-crore worth of attar produced in Kannauj, exports account for Rs 100 crore—mainly to West Asia and select countries in Europe like Spain, which have a sizeable Muslim population. It’s probably this realisation that has prompted Jain and his company to foray into synthetic perfumes, with a unit in Silvassa. Many, in fact, are diversifying into completely unrelated areas—the most popular being cold storage as the region has several potato farmers.

Both Jain and Pathak also have cold storage facilities. Interestingly, given the socio-economic climate of the region, attar makers are cagey about revealing the true extent of their business finances. They also heavily under-report their turnover figures for fear of attracting unwanted attention—and not just from the tax bogeyman.

Visit Kannauj and you are transported to an era of yore, till you actually spot a BMW belonging to one of the attar manufacturers. It’s a cottage industry that’s hidden behind facades of houses situated on either side of a labyrinthine network of narrow, cemented lanes.

Henna flowers being weighed and sorted before processing
Attar manufacturing is a closely-guarded family business, and queries about the business are regarded as an intrusion into a private act, drawing hostile glares. Turning up its nose at technology—the perfume industry here is distinctly uncomfortable with even the slightest touch of modernisation—the industry still uses the age-old, slow, laborious and labour-intensive process where the sandalwood oil extraction itself takes a week. The process of making attar is still the same as followed centuries ago—degh bhapka. The flower-water mixture is heated on brick ovens using wood charcoal. “We did experiment with industrial burners but they not only turned out to be more expensive due to the cost of the gas cylinders but their flame often burnt the contents inside. This way, we can control the amount of heat required by each urn,” informs Pathak. 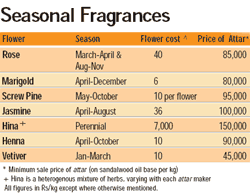 Pushpraj Jain
Standardisation and quality control are another iffy area and the nonchalance about the lack of either is borne out from the knowledge that theirs is a monopolistic cottage industry. Refusing to introduce any standardisation procedures, Jain of Pragati Aroma Distillers says the industry depends on smell alone and even within the same variety of flower, there will be a difference in the aroma due to varying climatic and geographical conditions. “Why should I get hassled about quality control when nobody is even asking for it?” asks a smug Jain, knowing that the bulk consumer—the tobacco makers—will lap up anything he dishes out since their own quality is also suspect. That explains why, apart from Malik, none of the major attar manufacturers BT spoke to, is seeking to expand his spread to overseas markets.

Jagat Narain Kapoor
The end product may be lusciously fragrant but there’s nothing sweet-smelling about the manufacturing process, as a multitude of fumes and smells assail your eyes and senses. Workers get paid on an average Rs 2,500 per month—not compensation enough for wading through watery-slush, lugging 60 kg sacks on their backs and being exposed to a heterogeneous mixture of steam and fumes from the woodcharcoal throughout the day. “While the process may be open to some modification for modernisation, the degh-bhapka system has its advantages—it is mobile and requires a low intelligence quotient to operate it,” observes Kapoor.Intriguingly, most manufacturers don’t see any compelling reason to brand their attars—selling them by their generic floral content. Their contention: since both the product and manufacturing process is the same, what point will branding serve? Besides, the high-value sandalwood oil-based attars are made largely on demand, which precludes the need for any branding for these home-grown entrepreneurs, who steadfastly follow age-old accounting practices. For these attar manufacturers, it’s a system that they are comfortable with, as it has worked for them through generations—and they don’t appear to be in any unseemly rush to fix something that, according to them, isn’t broke.