Bangalore’s image as India’s pub capital has taken a pounding, with confusing local laws and overzealous law enforcement acting as party poopers. And for the moment, it looks like Bangaloreans will have to mothball their dancing shoes. A report by BT's Rahul Sachitanand.

In most cities across the world, you’d be laughed out of sight for suggesting an end to your Saturday evening at this “late” hour. But in Bangalore, ironically dubbed India’s pub capital, you really don’t have a choice. 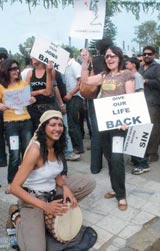 Bangalore protests: Organisers say around 1,000 people including DJs, musicians, theatrepersons and designers turned up in early August to protest the ban on dancing
So, here I am, two hours after setting out, looking for dinner, after my night out has come to an abrupt halt. Classifying our evening as pub hopping would be pushing it a bit, since we didn’t really get to our second joint at all, instead restricting ourselves to a few beers at Sutra, the Grand Ashok’s swish lounge bar. The place is clearly popular, there’s only standing room at the bar, and it takes a few minutes to get the bartender’s attention. Even then, everyone present seems to be taking things a tad easy. The normally pulsating Sutra is more staid, with music turned all the way down and everyone staying firmly rooted to the spot. Ironically, just next door, a Salsa Congress has just wrapped up and several participants have found their way to Sutra to unwind.

While Bangalore’s nightlife has already been crippled by a 11.30-p.m. closing time, all dance floors across the city have also been shut now. No one is allowed to break the law—by dancing. Fundamentally, nightlife in Bangalore is governed by The Licensing and Controlling of Places of Public Entertainment (Bangalore City) Order, 2005, and the Karnataka Excise Act of 1965. A prospective bar owner has to apply for a CL9 bar licence from the state Excise Department and then get a raft of permissions from related departments, including law and order, fire service and health department, before his venture gets off the ground.

However, in 2005, the government decided to crack down on dance bars (which operated under the same broad CL9 licence) and promulgated the draconian Karnataka Police Act that allowed it to pull the plug on anyone previously owning the CL9 bar licence.

Girish Karnad (left), Prasad Bidappa (right) also chimed in
“We got caught in the crossfire,” says Gina Campos Braganza, spokesperson for the Restaurant & Pubs Association and Partner at Opus, a popular watering hole. Since then, the Bangalore Police has forced all outlets to reapply for licences and their reissue is far from guaranteed. “The new procedure is more subjective and arbitrary. Part of the process involves inviting objections from anyone, for example, which could be misused,” says Braganza. While the industry association is talking to the government on this issue, she doesn’t rule out the option of going to the courts if things don’t work out. Bangalore Police, for its part, claims to have cracked down on 32 establishments that were operating without the required paperwork.

For now, several upmarket dance floors across the city have gone silent. Another crackdown, this time on DJs (with their tunes placed under the “live music” category) further darkens the mood.

“Bangalore’s reputation as India’s Pub Capital has been killed. With everyone working late these days, there’s nowhere left to party,” says Lourde Vijay, a dance instructor. The law enforcers are unwilling to back down. “The Karnataka Excise Act stipulates a closing time of 11.30 p.m. and we will not change this,” says Bangalore City Police Commissioner Shankar Bidari. And he’s willing to walk the talk, raiding prominent establishments such as the Taj West End’s Blue Bar for staying open beyond the permissible hours. For the record, Taj West End’s executives deny any wrongdoing, claiming they were putting away drinks returned from rooms.

Stung by the law: Taika’s Pat Manaschung raided for staying open late
Situated on the Church Street, in central Bangalore, Taika, a spa lounge, which had one of Bangalore’s most throbbing dance floors, is now a pale shadow of itself, as fewer patrons are willing to risk tangling with the law. For Pat Manaschung, the Thai owner of Taika, and two others—Kosmo and Geist’s Room— this downturn spells bad news. “No one is sure about the rules regarding drinking and dancing and so we’re suffering,” she complains. 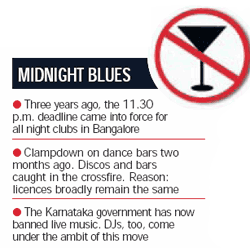 A stone’s throw away on M.G. Road, Gautam Krishnakutty, who runs the popular Tai Tai lounge bar, is in no mood to take chances with the law. “Last drinks are at 10.45 p.m. and we give guests their bills no later than 11.15 p.m. The local cops have been fairly good to us, but we don’t want to take a chance,” he says. The end result of his caution is that fewer people are turning up at his bar, instead preferring to either party at home or a farm house.

Some of the discontent over these laws spilled into the open on August 10, when about 1,000 people assembled at M.G. Road to make their protests heard. This protest was primarily against the ban on dancing, with renowned theatre person Girish Karnad accusing the state administration of “going after musicians rather than criminals”. An assortment of DJs, musicians, theatre persons and other creative folk banded together to try to project a united front against the “suppression of artistic freedom”. But, for the moment, it looks like Bangaloreans will have to mothball their dancing shoes.