The job market has taken the biggest downturn in the past eight quarters.

The speedbreakers are becoming more numerous on job street. According to the latest BT-TeamLease Employment Outlook Survey (October-December 2008 quarter), the caution visible in the last quarter has turned into a decisive downturn—both in hiring and business sentiment. The Employment Outlook is down 10 index points while the Business has dipped nine index points in the quarter. The Business Outlook for the next quarter is at an all-time low of 56 index points, compared to 65 index points in the last quarter, a clear indication that the overall downbeat sentiment is hurting business prospects. Employers are in the wait’n’watch mode. The result: hiring activity is likely to be sluggish in most sectors—IT, infrastructure, retail, FMCG & media, financial services, telecom and manufacturing & engineering. ITES is the only sector that is buoyant, according to the survey. However, this buoyancy has turned into caution after the Wall Street crash because many companies depend on the now sick US financial services companies for major portions of their revenues. The survey, incidentally, was conducted before the crash.

So, is it time to panic? Not quite. Companies are not talking layoffs or even a freeze on hirings. Their focus has shifted towards improving efficiency and productivity of employees in order to remain competitive in the market, rather than on increasing staff strength. What does that translate into for you? Read on.

Click here to Enlarge
In the survey, the Net Employment Outlook (the difference between the percentage of respondents reporting an increase in hiring and those expecting a decline) stands at 65 per cent, a decline of 10 index points over the last quarter. That’s the lowest across the last eight quarters surveyed (See The Freefall). Points out Sampath Shetty, VP, Permanent Staffing, TeamLease Services: “The last quarter for this calendar year shows a grim overall outlook and continues to reverse the employment growth in India.”

Click here to Enlarge
Spread across eight cities—Mumbai, Delhi, Bangalore, Kolkata, Chennai, Pune, Hyderabad and Ahmedabad—the survey drew responses from 495 companies (See Methodology). In Bangalore, the Business Outlook for the October-December quarter of 2008 plummeted 20 index points (See Mixed Bag). But this is a minor blip compared to Ahmedabad and Hyderabad, which are facing the slowdown blues, with drops of a whopping 41 and 31 index points, respectively. It’s a dismal business sentiment across all sectors. While the sentiment for retail, media & FMCG sector has shown a marginal improvement, all other sectors reported a negative sentiment. After a massive decline of 47 index points in the last quarter, the financial services sector has touched another low with another decline of 16 index points. The sector has spiralled downward over the last few quarters due to the global meltdown in last one year.

Adds Shetty: “The IT sector has shown a steady slowdown in hiring over the last few quarters, which is indicative of the maturity of this sector, whereas the ITES sector has been volatile on hiring forecasts in last few quarters. The glimmer of hope for the ITES sector—that the US recession will have a positive impact for the Indian ITES industry— has not really been borne out by facts.”

P.B. Nageshwar
Infrastructure holds ground
Telecom, along with the retail, media & FMCG sector, leads the downward spiral. There will be fewer jobs in manufacturing and engineering, financial services, infrastructure and IT. ITES is the only sector that has bucked the trend, but the financial crisis in the US and Europe could dampen the positive sentiment. This is because most outsourcing players have large global financial services companies as their clients. Explains Tim Huiting, Vice President (HR), Convergys: “The impact is mixed—some companies that have a major part of their revenues coming from sick financial services players have been hurt badly. For others, the impact may not be that big or even neutral.” Huiting sees the net employment growth in the BPO sector remaining neutral till December 2008. In terms of hiring activities, the last quarter of 2008 will be very different from the first three quarters for Convergys. It recorded a strong recruitment growth of 25-30 per cent in the first three quarters, fuelled by high attrition rates. The company expects instability in the BPO business to lead to less movement of people, across levels.

Click here to Enlarge
CSC India, too, sees no cause for alarm. One of CSC India’s clients in the banking, financial services and insurance (BFSI) space, like Washington Mutual (WaMu), has recently been sold out to JPMorgan Chase, after being a victim of the implosion of the US mortgage market. Says Neelam Gill Malhotra, Vice President (HR), CSC India: “The global crisis hasn’t affected us much, though we have got our antennae up. We have already been committed a large amount of work under long-term contracts with WaMu. That means, irrespective of WaMu’s ownership change, CSC will continue to fulfil its IT services requirements.”

The manufacturing sector, though down, is not too worried about the global financial crisis. Yet, at the same time, employers in the sector are not upbeat about the current market scenario and are increasingly cautious about their hiring intentions. “I think the slowdown has little to do with domestic consumption; the major factors affecting India’s economy will remain unchanged,” says Yashovardhan Verma, Director (HR), LG Electronics India.

Tim Huiting
Surprisingly, the telecom sector, which has been fairly insulated from the global turmoil, is very conservative in its outlook for the quarter. But infrastructure has been steadiest of the lot. “This is thanks to the public private partnership (PPP) projects being a long-term play. These have negligible exposure to the current economy scenario,” adds Shetty.

The intention to hire in the financial services sector is at 59 index points, a drop of 8 index points compared to the last quarter. Will the situation worsen as the global financial markets remain in turmoil? Recruiters say that other than insurance sector, which is linked to the domestic economy, the entire BFSI pack, including investment banking, retail banking, and stock broking, is bracing for major lay-offs. “The situation is so dire that it is expected that ICICI Bank, which had announced plans of hiring 40,000 new employees during 2008-09, may not be able to add more than 5,000 new employees,” says Kris Lakshmikanth, Founder CEO & Managing Director, The Headhunters India.

IT bellwether Infosys Technologies is trying to soften the slowdown blow by reducing the size of its ‘‘bench’’ and increasing utilisation. Says Mohandas Pai, Director, HR and Administration, Infosys: “We expect hiring and salaries across the IT and ITES sector to be muted for the next few quarters as the full impact of the slowdown in the US and now Europe sinks in.”

Maveric Systems CEO Ranga Reddy has a word of caution: “On the IT front, nothing much was expected last quarter because of Christmas—but from January, companies will feel the (negative) US impact more—many have more than 60 per cent of their revenues coming from the US. They will be more impacted in the coming financial year.”

Reddy foresees curtailment in new hiring till financial projections from customers are more clearly outlined next year—this will have an impact on campus recruitment in June, too. 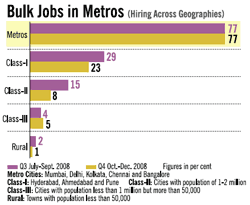 Business vs jobs
The hiring outlook for cities across the spectrum has taken a beating. The survey puts Job Outlook for Mumbai at 60 index points, down 15 points compared to the previous quarter. Ahmedabad, Bangalore and Delhi see a dip in the fortunes with the cities posting declines of 40, 16 and 10 index points, respectively. Chennai’s bad run also continues with a drop of 10 index points. The only city that has a positive Job Outlook is Hyderabad, which, incidentally, witnessed a drop of 31 index points in business sentiment. T. Sreedhar, MD, TMI Network, a leading talent hiring company, headquartered in Hyderabad, offers an explanation for this. “I see no contradiction here as both (Employment Outlook and the Business Outlook) are in sync.

The Employment Outlook is up because the projects that have been lined up (especially in infrastructure) will have to be executed now and the Business Outlook is down in tune with the dampening of the business sentiment, which has now been exacerbated by the happenings in the US.” In fact, it is also visible in the Employment Outlook, which should normally have been up by 15 to 20 per cent and not just 7 per cent, he adds. But then, why is this happening in Hyderabad alone? “Well, a bulk of the infrastructure players operate out of this region; then, new projects like the Rs 12,000-crore metro rail project have just been awarded,” says Sreedhar.

Click here to Enlarge
This contradiction has left S.V. Krishnan, Global Head (HR), Satyam Computer Services, puzzled. “There is a lot of buzz (in Hyderabad) and this is true for any sector—construction, infrastructure, real estate or IT.” Bangalore, according to Pai, has problems around both expensive infrastructure and talent. Other cities have been able to address both the issues more aggressively.

Despite the bleak job outlook projected for Chennai in the survey, companies are optimistic on the employment front. Shekhar Arora, Executive Director (HR), Ashok Leyland, attributes this to new units coming up, particularly in the auto sector, like Renault Nissan, Daimler and Mahindra Design Centre, which will be ready a couple of years down the line while Satyam Computer is scaling up its auto design centre in Chennai. Companies like Maveric Systems, which have greater presence in the UK, West Asia and Asia Pacific and little exposure to the US, are going ahead with recruitment and training plans. But others will take a more cautious view. 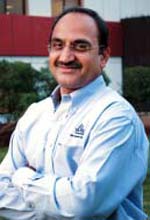 S. V. Krishnan
Setback for Tier-II cities
The metros continue to corner most jobs created, and Tier-I and Tier-II cities have lost ground. The intention to hire in Tier-I and Tier-II cities has dropped six and seven points, respectively, in the survey. Tier-I cities are largely considered the growth centres for the BPO industry (See IT Special, BPO 2.0). “In India, we still don’t have wide infrastructure support to shift to Tier-II and Tier-III cities in a big way. Tier-I, though expensive, still attracts the best talent compared to other Class-II, Class III towns,” says Huiting. P.B. Nageshwar, Head (HR), Jones Lang LaSalle Meghraj, says that the demand for relevant talent will continue to grow in the metros. “On the other hand, if Tier-II and Tier-III cities can attract good people, they can grow at tremendous rates,” he says. Infosys has expanded across the country and is looking beyond its headquarters in Bangalore. It has built large campuses in Chennai and Hyderabad as well as emerging towns such as Mangalore and Thiruvananthapuram to keep pace with its growth.

The problem of weak infrastructure still persists in Class-II and Class-III towns. In these cities, infrastructure growth hasn’t really picked up the way it was expected to, says Verma.