Integrity can take you places as India Inc. lowers its tolerance on ‘unethical’ behaviour by employees.

In 2007, a young management graduate applied for a job in business development at a leading Mumbai based capital goods company. An entry test later, this candidate was comfortably saddled in the new job till his new employer decided to get information on his provident fund account for taxation purposes. The exercise revealed that the candidate had overstated his salary by Rs 10,000 and forged the salary certificate. This prompted the company to check on his education credentials, which also revealed a few falsehoods. The employee was fired immediately. Workplace ethics is simply about doing the right thing. It is a set of protocols that drives the culture of our company: Nalin Garg (extreme left), VP (HR), Coca-Cola India
Last year, a Bangalore-based IT company hired a bright young software engineer. The company, for its part, was happy with its choice till it discovered something odd. Two months after this engineer joined, the company detected a pattern of large files being uploaded on the servers of its competitors at odd hours from its office computers. A team of internal forensic experts launched investigations and caught this engineer stealing sensitive data. He was sacked on the spot. Investigations revealed that the engineer had been offered money for the information by his previous employer.

Call it ethical erosion at workplace. India Inc. is facing, and increasingly becoming conscious of, issues relating to workplace ethics. A case in point: India’s largest IT services provider Tata Consultancy Services (TCS) recently asked 20 employees at its Kolkata centre to leave after the company, during a background verification exercise, found that these employees had used fake resumes to get jobs. Says Kris Lakshmikanth, Founder-CEO & Managing Director, The Headhunters India: “TCS is not the only firm doing this. Infosys had asked close to 100 employees to leave between April 2006 and March 2007 due to discrepancies found in their resumes. The same goes for Satyam Computer Services and Wipro Technologies.”

The issue of workplace ethics is not limited to fake resumes. Workplace ethics encompass issues such as cheating on expense reports, sexual harassment, doing personal work during office hours, offering bribes, and even regularly coming to work late or calling in “sick” inappropriately, among others.

Says Nalin Garg, VP (HR), Coca-Cola India: “Workplace ethics is simply about doing the right thing. It is a set of protocols that drives the culture of our company. Every employee needs to abide by it regardless of the designation or role. It includes punctuality, keeping personal work to the minimal, controlling expenses, maintaining office decorum and contributing towards creating a positive culture that results in enhanced performance and workplace relationships.”

That’s not all, though. At Coca-Cola, the recruitment and hiring process finds a way to measure an applicant’s stand on personal ethics. “No matter how much pressure we have on us to recruit, hiring an employee whose ethics are suspect is a no-go,” he adds.

Deepankar Sanwalka, Head (Forensic Services), KPMG
Says Deepankar Sanwalka, Head (Forensic Services), KPMG: “Ethics has become an issue managements are placing increasing stress on as they have begun to realise its benefits. The corporate sector in India is moving towards ‘zero tolerance’ towards instances of misconduct or erratic behaviour of employees.” While the definition of workplace ethics differs from one company to another, there are some basic similarities. Based on this, companies formulate some “safe” rules that will work for their organisation.

Motorola India, for example, offers training courses to selective employees—usually after they complete six months on the job. “This is done in order to teach legal requirements, raise ethical consciousness, and encourage employees to do the right thing,” says V. Ramachandran, Senior Director (Human Resources), Motorola India. The company encourages its employees to undercommit and over-deliver, so as to avoid the common pitfalls.

To deal with the issue, Coca-Cola has gone one step further. It has tied up with an external agency, Human Dynamic Asia Pacific, for its employee assistance programme, under which the agency provides confidential counselling and support during personal crises. “The purpose of this hotline service is to encourage whistleblowers in the organisation.

That is precisely what we need to develop and communicate ethics to our employees. Employers have a legal obligation to prevent harassment and discrimination in the workplace,” says Garg.

However, unethical behaviour remains endemic in the Indian workplace. Ganesh Shermon, Partner & Head (Human Capital Advisory Services), KPMG, says: “Most companies do not have a streamlined process to check or control unethical behaviour apart from internal audit processes or direct control over business matters of a financial nature. Many organisations lack the will and intention to spend top dollar on a sound Business Code of Conduct to track whitecollar frauds and maintain an ethical workplace.”

Nandita Gurjar, VP, Infosys Technologies
Reasons Nandita Gurjar, VP & Global Head (HR), Infosys Technologies: “The most obvious reason for policies failing to work is that employees perceive them to be nothing more than lip service. This, of course, is clearly the case when employees observe the senior management behaving in a manner inconsistent with the stated policy. 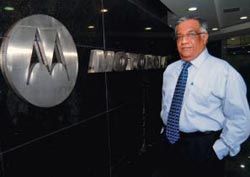 V. Ramachandran, Senior Director (HR), Motorola
In cases where the senior management fails to articulate the rationale for the policy, instead of viewing the policy as a set of standards that says something important about the culture and values of their company, employees get the impression that the policy is there merely to adorn office walls.”According to Gurjar, Infosys doesn’t just put its value systems on the wall but ensures that everybody follows it. “It is critical that you drill it everyday into each employee working with you,” says Gurjar, adding that in 2008, the company held back promotions and increments to those employees who hadn’t put in the minimum work hours (9.15 hours per day).

Dhirendra Shantilal, Senior VP (Asia Pacific), Kelly Services
The biggest challenge companies face in terms of defining ethics is the blurring of lines between personal and professional time. Employees chatting over the Internet, visiting job sites and trading on the stock market are a few of the tricky issues companies have to deal with all the time. “Most people don’t give company assets a second thought until they are lost, stolen or broken. Herein lies the problem. It is acceptable for employees to do some personal work during office hours, but if the degree of work keeps on increasing, organisations become intolerant beyond a certain point,” says Dhirendra Shantilal, Senior Vice President (Asia Pacific), Kelly Services, a global recruitment firm.

M.S. Venkatesh, Senior VP (HR), Educomp, offers another viewpoint. “It is important for a company to understand that employees spend most of their time in office. So, providing some sort of work-life balance not only gives them better-adjusted employees; it also results in a more ethical workplace,” he says.

Companies across the spectrum agree that unethical behaviour can hurt the employee more than it can hurt them. Ethics at work is, then, the good idea whose time has come.