The subprime crisis and the slowdown in the US will hit the Indian IT industry hard. According to top industry executives, the IT industry, which was growing at over 30 per cent till last year, may now have to be satisfied with a 15-20 per cent annual growth. BT's Rahul Sachitanand reports.

In mid-April this year, Girish Paranjpe and Suresh Vaswani, the newlyappointed joint CEOs of Bangalore-based Wipro, found little time to celebrate their new roles. Just days after they were promoted, the two found themselves back on the road, for back-to-back meetings across the globe—to persuade customers that all is well with their projects and then, convince them to loosen their purse strings and sign up for more large contracts. 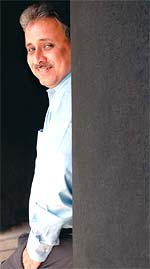 Suresh Vaswani
Wipro and its peers in the $31-billion (Rs 1,24,000-crore) IT industry realise that the fastgrowing sector is about to hit some speed breakers. The reason: the global banking and financial services industry (BFSI), from which the IT industry earns over 40 per cent of its revenues, is in unprecedented turmoil and the ripple effect could extend to other key contributors such as retail (if spending in the industry falls) and, perhaps, manufacturing. According to top industry executives, the Indian IT industry, which was growing at over 30 per cent till as recently as last year, may now have to be satisfied with a more realistic 15-20 per cent annual growth. “The slowdown has been around for close to six months… there are enough rumblings on Wall Street to keep us on our toes,” says Shailesh Shah, Chief Strategy Officer, Satyam Computer Services.

Others believe that the slowdown is building up steam and there are worrying indicators on the ground that this might even presage a slump. “There’s little doubt that the industry is in the midst of a slowdown. Customers aren’t (yet) cancelling contracts, but they’re taking longer to decide and discretionary spends have slowed,” says Paranjpe. According to data from technology research agency Forrester, IT spending is expected to grow just 6 per cent in 2008 compared to around 12 per cent last year.

Buffeted by the subprime crisis, financial services companies are taking longer to decide on new or renewal of contracts and this is beginning to bite, as they look to extract lower billing rates from their IT vendors. “Large Indian IT companies have shown little growth in their BFSI businesses; and pricing for leading players (like TCS) remains flat at around $72 per hour (Rs 2,880) onsite and around $27 offshore (Rs 1,080),” says Harshad Deshpande, Equities Analyst with Religare Securities.

TCS has already reacted to these storm clouds, offering to pay the transition costs of moving work offshore for some banking clients, even as analysts have panned its performance. Manik Taneja, an analyst with Emkay Research, says: “TCS reported the weakest set of numbers among its peers. Revenues grew a mere 2.9 per cent QoQ, 2 per cent below estimates, and EBITDA margins were down 120 bps.”

Incidentally, TCS’s earnings declined 5.5 per cent QoQ for the first time in three years. Company executives say that it has reacted swiftly to the changed market conditions and that its forays into new geographies and businesses are beginning to show strong growth signs. “Our investments in the new growth markets of Asia-Pacific, Latin America, India, West Asia and Africa are paying dividends. In 2007-08, revenues from new growth markets grew 40 per cent to $1.15 billion (Rs 4,600 crore),” says S. Mahalingam, CFO and ED, TCS. S. Mahalingam
Arch rival Infosys Technologies had its own worries as QoQ billing rates inched ahead just 0.2 per cent, the smallest expansion over the last seven quarters. “The impact, which was initially thought to be confined to the financial services sector, has spread to retail and manufacturing. The current slowdown seems to be more deep-rooted and prolonged than the one in 2002-03,” says V. Balakrishnan, CFO of Infosys.

As the industry grapples with this slowdown, companies and, more particularly, investors, will also have to deal with lower stock market returns as equity markets around the world slow down or go into a tailspin. “IT stocks began their correction well before the market began to crumble and we expect them to stay flat or decline slightly,” says Religare’s Deshpande. 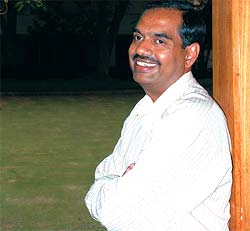 V. Balakrishnan
A combination of slower or flat growth and lower valuations may have other consequences—it could spark off another round of consolidation as cheap mid-caps are picked up by large players.

The issues this time are different from the previous slump that hit the tech sector in 2002-03. “That one was a consequence of companies over-spending on their IT requirements; this time around, the recession is based more on an actual downturn in business,” says Wipro’s Paranjpe. There are also other factors that are exacerbating the situation.

“The assumption that the rupee will stay at Rs 40 per dollar, we believe, is optimistic and clearly puts at risk the company’s ability to meet its guidance in case the domestic currency appreciates further,” says an Angel Broking note issued after Satyam’s recent results. Some companies, such as TCS, however, believe that the rupee has reached its peak against the dollar, and India’s #1 software exporter claims it is sufficiently insulated against future currency fluctuations.

Indian IT companies have already begun looking beyond the US market for their revenues. According to Vaswani of Wipro, the company’s domestic business is valued at around Rs 4,000 crore and it has been able to leverage the knowledge gained from its global business to win large contracts at home. “We won the $600-million (Rs 2,400 crore) deal with Aircel leveraging the telecom expertise of our global business,” he explains.

Faced with challenges on multiple fronts, IT companies are looking at different ways to sustain growth in the industry. “We are leveraging our strength in applied R&D and embedded systems to target industries such as telecom and healthcare,” says Wipro’s Paranjpe.

Satyam, meanwhile, has grown its consulting and enterprise business solutions vertical 42 per cent, and this is expected to bring it additional revenues in future. “Every dollar of consulting revenues typically generates $3-4 (Rs 120-160) of downstream sales for applications development, implementation and maintenance,” says the Angel Broking note.

Wipro’s Vaswani says that it is this downstream business that Indian IT needs to develop to stay competitive. For example, he adds, Wipro has consolidated the consulting units across its different business units into one 1,000-person unit and is hoping that this move will help it bag more lucrative, consulting-led contracts. As more highend work is shipped offshore, analysts say that Indian IT vendors will quickly need to broaden their capabilities beyond cost-based applications development and maintenance tasks to areas such as solutions and technology and management consulting. “We are also focussed on high value-added services like consulting, where the rates are much higher,” says Infosys’s Balakrishnan.

Despite these moves, industry watchers say that companies like Infosys and Satyam are just finding their feet as globally dispersed multi-billion dollar companies. “It will take at least a couple of years to say whether the re-organisation undertaken by companies like TCS and Infosys will have a long-term positive impact on their businesses,” says Samad Masood, an analyst at tech research firm Ovum.

IT companies will also begin to reduce wage hikes. “The norm has been 15 per cent or even 20 per cent hikes; we think that will now come down to about 10-12 per cent on average,” says Religare’s Deshpande. Then, companies that typically keep anywhere from 20-30 per cent of their staff on an inactive roster called the “bench” in anticipation of future projects may now change their strategy. According to Wipro’s Vaswani, the company could put up to 5-10 per cent more of its staff on the active roster.

Then, Vaswani points to Wipro’s $600 million (Rs 2,400 crore) deal in August 2007 for Infocrossing, as a pointer to the evolution of the industry. “This deal gave us a large data centre in the US and access to customers who would otherwise have hesitated to work with us,” he says. Having got these customers on board, Wipro is now transitioning some of their work to offshore sites.

The immediate outlook seems cloudy for India’s IT sector, but the good news is that the industry is using this crisis to move up the value chain, while simultaneously emerging as a leaner and more efficient fighting machine. That, however, may be the only silver lining.