India’s handful of innovation-driven pharma companies are running through hundreds of crores of rupees in their endeavour to put a new drug on the global market. There have been a few setbacks along the way, but nobody’s giving up—not yet. 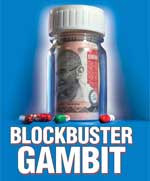 Indian drugs in global market
A gambit is a chess opening in which material (usually a pawn) is sacrificed in order to achieve an advantage. There are various kinds of gambits— usually played out in the first few moves of a chess game—the more popular ones being the King’s Gambit and the Queen’s Gambit. A lesser-known gambit (and one considered dubious by purists) is the Halloween Gambit, an aggressive attack in which the person playing with White sacrifices a knight to gain a pawn. The idea: To create a strong centre with the pawns and drive back Black’s knights. It rarely works.

What Indian Pharma is attempting with its Blockbuster Gambit isn’t too different from the Halloween Gambit. A clutch of Indian innovationdriven drug companies is pouring big money into discovery of altogether new treatments for existing diseases. Already, over the past 8-10 years, these firms would have spent a couple of thousand crore on putting a new chemical entity (NCE, R&D-speak for a new drug) on the market. The market size for each of these drugs in various therapeutic areas, which range from oncology to metabolic disorders to asthma, runs into billions of dollars; suffice it so say that one new drug on the market will be adequate to change the scale of their existing operations in a big way.

According to the most optimistic industry predictions, there are currently at least 60 molecules in various stages of development in the pipeline of Indian Pharma. Like the knight in the Halloween Gambit, many of these molecules—and the investment pumped into them—are sacrificed at some stage when the lead doesn’t have the legs to progress (typically in the West, for a hit to transform into a lead and then progress through three stages of clinical trials, costs close to a billion dollars and takes almost a decade to progress from initial research, to clinical trials, to market). The Blockbuster Gambit, like its counterpart in chess, may just not work.

Try telling that to the CEOs of India’s innovator drug firms, almost each of whom is eyeing to put a new drug on the market in the next five-seven years. This is significant at a time when Big Pharma is spending billions of dollars annually (Pfizer spent $7.5 billion on R&D in 2006) in its quest for blockbusters (blockbusters are loosely defined as drugs that can bring in $1 billion a year). But successes have been few and far between, even as blockbusters from the past are set to lose patent protection and invite generic me-toos. By using the India cost-advantage (which has dwindled over the past decade from a tenth of R&D costs in the US to perhaps a sixth-seventh), research skills that were gathered initially, courtesy of reverse-engineering and honed on generics, and a highlyskilled talent pool of scientists that exists in the country (many who are returning to India), the Indian pharma sector may just be on to something big. The bounty is still some years away, with the maximum distance travelled by Indian molecules being Phase II of clinical trials (only Dr Reddy’s has a molecule that’s in Phase III). But at R&D centres of India, the excitement is palpable. An internal scenario analysis done by Nicholas Piramal India Ltd (NPIL) suggests that Indian Pharma could command a market value of close to $130 billion by 2015, up from the current $60-odd billion. And the NCE part of this business, which is estimated to be valued at just $11 billion, would grow at cumulative average rate of 25 per cent till 2015, to account for half of that market value ($64 billion). The base business is expected to nudge ahead at 4 per cent on a cumulative average basis, from $47 billion in 2007 to $65 billion by 2015.

These are mouthwatering numbers, although there are sections of industry that aren’t swayed by such optimism. After all, as they point out, every NCE is different, and enjoys different prospects, so it isn’t the simplest of tasks to arrive at one single value for the entire industry —particularly when there’s still such a long way to go. Ajay Piramal, Chairman, NPIL, himself agrees that “NCE research is fraught with uncertainty”, and that these figures may not pan out.

Yet, years before any drug from India hits the global shelves, the good news is that many companies are slowly but surely beginning to cover up their research costs—and even earn a return on it. This is being done by licensing out molecules to international players in return for chunky upfront and milestone payments (with a promise of royalties and marketing rights in select markets if the drug does make it to market). Collaborations involving such payments are also being worked out with Big Pharma firms. Private equity too is pouring in, but there’s little guarantee of it staying (see Trials by Fire). The trick, of course, is to decide when to license out or sell equity, or whether to do that at all. A lot depends on the appetite for risk, and for how long one can maintain that appetite. It’s a sacrifice. It may just work.

A mine of dreams