Job loss: Are you next?

Employees as well as employers are struggling in this financial downturn—the employees to find jobs in a market where very few companies want to hire and employers to carry out layoffs as gently and painlessly as possible, and failing miserably. Saumya Bhattacharya reports.

When Aditie Prakash reached her office on January 5, there was a company envelope on her desk. Breathless from a last-minute sprint for the lift, she plonked herself into her chair, and tore open the envelope. “Dear Ms Prakash,” the letter read, “Re: Acceptance of resignation”. What? Mystified, she read on: “This has reference to your letter dated December 28, 2008, tendering your resignation... We wish to inform you that your resignation has been accepted and that you will be relieved from the services of the company with effect from March 10, 2009, after closing hours, as requested by you. You are requested to contact the HR department to complete your clearance formalities for full and final settlement of your dues.” 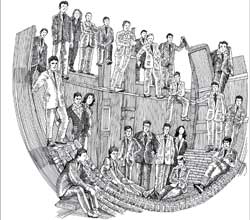 Aditie’s heart seemed to stop. She had never resigned, so where was the question of “accepting” her resignation? So, this was why the HR manager had been avoiding eye contact with her yesterday! Aditie looked around at the large open-space hall—did others know? She could see Neha going hyper with the HR guy at the far end, waving what looked like a similar letter. It was just five past 10, so not many people had come in. Aditie’s heart now began thundering as panic set in, her head crowded with thoughts. Bank balance: Rs 31,000… Disgrace… Her new apartment?.... The card payments for next month…

As the day progressed and the others trickled in, Aditie would learn that she was not the only one to have been given the letter—in the next seven days, her 300-odd colleagues would all be out looking for jobs.

Aditie and her colleagues— sacked, retrenched, dismissed, relieved of their duties, fired—are just a handful among the lakhs of middle-class urban Indians caught in corporate India’s biggest-ever season of bloodletting. Employees as well as employers are struggling—the employees to find jobs in a market where very few companies want to hire and employers to carry out layoffs as gently and painlessly as possible, and failing miserably.

What’s aggravating the situation is the fact that the exposure of the Indian middle class to the private sector is higher than ever. The workforce in the private sector— in their 20s, 30s and 40s—is largely unprotected in terms of security of their jobs, investments, retirement and children’s education. Many of them have EMIs to pay on home and car loans. Experts are talking of preparing for ‘‘downward mobility’’—being able to live happily with lessthan-before, income, at least temporarily. Add to this the stigma that layoffs are in India. BT spoke to a number of executives who have been laid off by their employers, but few were willing to come on record and reveal their identities (See the right handside page for some cases). Though the job cuts, on an average, have not exceeded 5-10 per cent of any company’s payroll (except in cases where the entire business or division has been shut), the insecurity is affecting the spending behaviour of the remaining 90-95 per cent of employees. The ‘Whatif-I-am-the-next?’ syndrome has restrained people from spending on things they would shell out money for without a thought just a few weeks ago.

While India Inc. plays the axeman, its workforce is a bundle of nerves. Companies are faced with queries like—will there be downsizing? Will salaries be stopped? Will business targets be met? CEOs and HR heads in several companies have stepped up communication with employees and other stakeholders (See pages 56 and 66). At corporate workshops and seminars conducted by Dr Samir Parikh, Psychiatrist and Chief of the Department of Mental Health and Behavioral Sciences, Max Healthcare, the young executives ask: What if I am the next to be fired?

“If there is a change in finance or social status, it brings a lot of stress… In work and in our finances, our identity is defined. What you do is your identity. Slowdown has added a significant dimension to the already existing stress of the workplace,” says Dr Parikh. This young workforce has seen immense growth in the current decade. Ergo, reconciliation with a downturn is agonising.

The mass layoffs are especially painful since they come after a boom in which companies fought to recruit in large numbers in order to fuel big expansion plans. For instance, it was just in 2006 that one of India’s biggest retail ven-tures was on the prowl for the best talent at all levels. Campus hires were to form half its workforce, while headhunters prowled enemy camps so they could fill corner room offices with million dollar plus salaries garnished with stock options. The same retail venture is now “rationalising”. The company would not confirm any figures, but the grapevine says it has shed more than 10,000 employees in the last few months. Says Sonal Agrawal, CEO of Accord Group India: “Companies are squeezing all assets, including human assets.”

While not every employer wants to get rid of people and some employers are even creating new jobs, the pessimism is taking its toll. “In good times, companies gave you a long rope. Today, their tolerance level is very short,” says E. Balaji, CEO, Ma Foi Consultants.


Where are the biggest layoffs happening? That’s a tough one, in the absence of primary or even secondary data. Retail, construction, sections of financial sector and media and entertainment are where staff reductions are the most acute. According to estimates from recruitment firms, permanent hiring, which dropped nearly 25 per cent in the last quarter of 2008 (compared with the last quarter of 2007), has come to a grinding halt in the first quarter of 2009. These firms reckon that India Inc. will trim its payrolls by 80,000 to 100,000 in the January to March quarter. That’s a conservative estimate. A report by the Ministry of Labour says over 500,000 jobs were lost during October to December 2008. But this number covers only the organised sector, which accounts for barely 10 per cent of the total workforce. The estimates of job losses in the informal sector run between 1 and 10 million. Padma Ravichander
From the employers’ perspective, the squeeze in the jobs market has shrunk salaries to pragmatic levels. At one of India’s top business schools, students were seen asking for “great jobs even at lousy salaries”.

Employers, obviously, are happy with the return of value-pricing. At least in some sectors, salaries had risen way faster than they ought to have in the past few years, making wage inflation a real worry for India Inc. “It’s not about retrenchment; talent management is transforming. It is much more healthy now because it serves the needs of the market. Salaries coming down is good because value-pricing is very important for a market like India,” says Padma Ravichander, Managing Director for Mercer in India.

Is the worst over? Have the layoffs peaked at their January-February levels? The answer to this question depends on the degree of certainty about business prospects— which is in extreme short supply in most sectors right now. Note how many companies skipped the regular practice of providing a performance guidance when they announced thirdquarter results in January.

“I am not sure the worst is over,” says Manish Sabharwal, Founder Chairman of TeamLease Services, a leading staffing firm. For permanent hiring to restart in a significant way, demand needs to be consistent for at least two quarters. Sabharwal is not alone; corporate bigwigs have no idea how long the downturn will last. “None of us has any clarity on the job market. In this kind of uncertainty, organisations will not make hiring decisions,” says Pratik Kumar, Executive VP, HR, Wipro Ltd. Even keeping the existing flock productively employed has become an issue. Infosys Technologies plans to extend the training period for people on the bench from 16 weeks at present, to 29 weeks. Uncertain about demand in the coming months, Apollo Tyres had contemplated downsizing or re-deploying a section of its manpower. For the time being, it has opted for the latter. Uncertainty has brought the annual hiring plans to a complete halt. Recruitment firms have stopped getting annualised data on hiring; usually companies have this identified in advance.

This is despite the fact that India is among the few nations that have good growth numbers. “We are more mildly hit, but our social structures are not developed. In that sense, what we have is a new phenomenon,” says Ravichander. In her career span, Ravichander has already seen three-four such cycles of boom and bust. Are these cycles getting more frequent? “Whether economic cycles are getting shorter or not, they are surely getting complex,” she says. And infinitely more widespread—across industries and geographies.

Yet, despite being amidst an unprecedented job crunch, the Indian workforce—especially the whitecollared— has a lot to count on. In spite of a decisive shift in attitude towards spending a larger proportion of income (a natural consequence of living life on credit), the average Indian household is still among the best savers in the world—better than even the Chinese household. The family support is still infinitely stronger than in the West, which is of key value during times of financial insecurity. Most importantly, for most families, big improvements in living standards have mostly taken place within the last one generation—or less. This makes downward mobility— the ability to cut living costs easily— easier. Though none of this makes living with a job loss, or prospects of it, easy, it does help to overcome the absence of a social security system.

Long after the current job squeeze gets over and when companies get back to hiring, there is one lesson from this downturn that every working executive will remember: in today’s economy, job security isn’t going to be the same as employment security. When the economy predominantly consisted of government and other public sector jobs, job security (not getting sacked) was high, but employment security (finding a new job if you were sacked), was low. In the new economy, the reverse will be true—people will get sacked more easily than before, but they will also find a new job more easily than before. It’s just that living between the two stages will take some getting used to.

The World of Sen