Nilgiri Mountain Rail offers an incredible once-in-a-lifetime experience, but the Railways needs to act quickly to tap its business potential. Otherwise, this technological wonder will die a natural death. N. Madhavan takes the breathtaking journey on the steepest and longest mountain railway in Asia and a UNESCO heritage site. The journey turns out to be a peep into what bad economic rationale can do to a potential money-spinner.

We are at the foot of Nilgiris in Mettupalayam, a small town, 34 km from Coimbatore in Tamil Nadu. What brings us (India Today photographer H.K. Rajashekar and I) here is a historic occasion—the centenary of the Nilgiri Mountain Rail (NMR), the steepest and longest mountain railway in Asia and a UNESCO heritage site, which connects Mettupalayam (1,069 feet) and Ooty (7,228 feet), the Queen of the Hill Stations in south India. The journey turns out to be a peep into what bad economic rationale can do to a potential money-spinner. 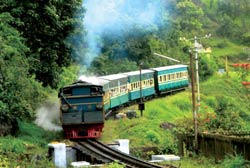 Nilgiri mountain rail
For starters, the Mettupalayam station is bereft of any festivities that normally surround such events. A 45-day celebration, we were told, was kicked off a couple of days ago by R. Velu, Minister for State for Railways. The platform is abuzz, though; passengers with confirmed tickets are getting into four small wooden coaches, while many more without reservations are haggling with the station master for a seat on the train (you could be mistaken into believing that NMR is a cash-cow, but more on that later). Only a lucky few get in while most others are turned away.

A few hundred metres away, a steam locomotive is being readied for the arduous five-hour, 45.88-km journey. It will push four coaches carrying around 200 people with an aggregate weight of 65 tonne over steep gradients—truly a beast of a machine. Its fuel for the trip between Mettupalayam and Coonoor is 4.5 tonne of coal and over 15,000 litres of water. The uphill journey will take five hours (downhill journey: threeand-a-half hours).

The train starts at 7.10 a.m. and soon gathers speed as it travels through the relatively flat terrain with its shrill whistle transporting you back to your childhood. By 7.40 a.m., we reach Kallar (1,260 feet). It’s time to fill in more water in the loco that has a storage capacity of only 5,000 litres. The train begins its steep climb. It is also from here that NMR’s famed rack and pinion system, the only one-of-its-kind in the world using steam locos, which holds the train in steep gradients, begins. The loco is soon huffing and puffing as it handles its steep ascent. The speed, too, has reduced (maximum speed in the rack and pinion stretch that extends from Kallar to Coonoor is just 13 km/hour). Even as the loco struggles, the view outside turns spectacular. The Kallar Bridge, where the train emerges from a tunnel and curves its way on a bridge, is a lensman’s delight.

For the next three-and-a-half hours, the train crosses 16 tunnels, 250 bridges, 208 curves through verdant forests, deep ravines and across rivulets, offering passengers picturesque views of the valleys below and lofty mist-covered mountains above. Such is the view outside that the excited tourists are often stunned into silence.

The ride isn’t always as smooth. “At times, elephants block the path, especially between the 14th and 17th km marks. We have to patiently wait for them to move before proceeding. Landslides are also common,” explains P. Raveendran, the train’s guard. In case of an engine failure, the passengers are moved to the nearest road and sent onwards by bus. If the breakdown happens in a dense forest, this becomes quite a task. The train chugs its way past Hillgrove (3,580 feet), Runneymede (4,612 feet) towards Coonoor without any of these disruptions.

However, the heritage train makes many unscheduled stops. “The locos are old and consume a lot of water. So, we stop at various water-filling points en route. That apart, at times when the locos fail to generate enough steam, we stop, build up steam and then move again,” says J. Nagesh, Divisional Mechanical Engineer, Salem Division. The locos are, indeed, old. The youngest one is 55 years old and the oldest, 88 years old—way above the 40-year life span prescribed by the manufacturers. In fact, the aged beasts have begun to underperform over the years. Today, it takes longer to make the journey (it took 81 extra minutes during our trip) and its progressively declining power has forced the Railways to cut down the number of coaches from six in 1980s to four today. Also, non-availability of crucial parts, such as link motion rods, within the country has forced the Railways to cannibalise parts from other locos. Over the years, this has shrunk the number of operational locos to just seven from 12 earlier.

Rakesh Chopra
Considering that at least once before (in 1982) the Commissioner of Railway Safety had stated that the condition of the tracks and the locomotives was not safe for passenger transportation, it is the ingenuity of the 500-odd NMR staff that has kept this rail system going safely. It is 11.15 a.m. and raining as the train reaches Coonoor. Diesel locos take over from here for rest of the trip to Ooty. The Railways, it becomes apparent, does not have a business plan for NMR. If delays in replacing the aged locos are worrying, the fare is bewildering. All you have to pay for the five-hour unforgettable mountain ride is Rs 9 (Rs 117 for the limited First Class seats). Incidentally, a bus trip between Mettupalayam and Ooty will cost you Rs 40. Little surprise then, the NMR section earned a paltry revenue of Rs 31 lakh in 2007-08 from 27,630 passengers against an expenditure of Rs 6.69 crore.

Considering the rage for the train (it is running full even in off season), I wonder why the Railways can’t steeply increase fares, buy new locos, introduce bubble top coaches that one sees in Switzerland, run more trips and, in the process, make NMR a profitable operation.

We pose these queries to Rakesh Chopra, General Manager, Southern Railway. “I agree that Rs 9 is a pittance. We are looking at charging tourists more and run more special trains,” he says. On the issue of locomotives, Chopra explains: “We have a sanction to buy four locos. We are working out the modalities. IRCTC is also drawing up a business plan to improve NMR. We have been spending a lot of money over the years to keep the mountain rail safe.”

As the train reaches Ooty at 12.35 p.m. (35 minutes late), we ask a French couple on board, Raes Olivier and Comble Caroline, about their experience. “It was an incredible once in a lifetime experience— our first in a steam engine,” they gushed. Going by tourist reactions, it is clear that the business potential is enormous for NMR and that the Railways needs to act quickly to tap it. If it does not, this technological wonder will die a natural death—by simply running out of locos.