With the cash registers ringing, Karan Johar is staking his claim as Bollywood’s youngest showman. 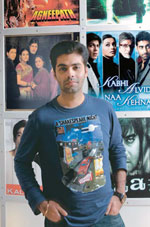 Karan Johar
Snide remarks from the uncharitable often allege that when you have the country’s reigning superstar as your best buddy, you don’t need much else for your movie. Not even a script or a storyline, they snigger. Tell that to the 35-year-old at the receiving end of the sarcasm and he doesn’t even twitch a facial muscle—maintaining his deadpan expression with aplomb. “When you have a Shah Rukh Khan or Amitabh Bachchan in your star cast, the responsibility on you to deliver the goods becomes even greater. Then again, why shouldn’t I work with Shah Rukh—it’s a winning team,” counters Karan Johar.

Johar’s movies, which adhere to Bollywood’s definitive cinematic boundaries, have often found themselves trashed as no-brainers by those with discerning tastes. “I have never claimed to be a cerebral or a path-breaking film maker. I like to make movies that are entertaining—they are happy films about real people in unreal situations,” admits Johar.

My kind of flicks

Starting off with his first venture, Kuch Kuch Hota Hai (KKHH) which dealt with college love finally coming to fruition years later, Johar has been panned for creating an unreal world—his directorial debut accused of transplanting Riverdale High from Archie comics into a Mumbai setting. His second venture, Kabhie Khushi Kabhie Gham (K3G), which saw India’s biggest star cast in terms of value—Amitabh and Jaya Bachchan, Shah Rukh Khan, Hrithik Roshan, Kajol and Kareena Kapoor—got plenty of stick for its outdated storyline of a father kicking his son out of the house for marrying a girl from a lower socioeconomic strata.

Not that it fazes him when critics rip him apart. “I don’t blame the media or hold any grudges,” he says. He doesn’t need to—distributors have never lost money on his movies and the crème de la crème of Bollywood vies for an opportunity to work with him. K3G went on to become the first Hindi movie to enter the US Top 10 charts in addition to being featured at third place in the UK Top 10 while the screenplay for his third outing, as producer for Kal Ho Naa Ho (KHNH)—directed by Nikhil Advani—found an unlikely resting place at the Oscar archives of the Library of Motion Picture, Arts and Science.

Fellow film maker Ravi Chopra does admit that Johar’s movies are larger than life. “He has a knack of mounting his storylines on a big canvas. He makes his movies from the heart—paying attention to the script, screenplay, music and the cast. And while his movies may not appeal to some, he certainly does not make stupid films,” states Chopra.

To be fair to Johar, he did make a radical departure—by Bollywood standards—with his fourth offering, Kabhi Alvida Na Kehna (KANK). The story dealt with adultery—of finding a soulmate outside marriage. Does that mark a shift in his story subjects—of dealing with adult and hitherto taboo topics?

“At different stages of your life, you deal with different situations and that reflects in the choice of subjects I deal with in my movies. When I started my career as a director, I was 25— so a love story about youngsters came naturally. My next movie K3G was all about loving your parents while KHNH was about losing the one you love,” reflects Johar, referring to the demise of his father, Yash Johar who, ironically, never wanted his son to follow in his footsteps.

Observes Shimit Amin, another film maker basking in the success of his second directorial venture, the cult flick Chak De India, “I think he understands his world and puts it across well—somehow connecting with the audience. He recognises his milieu and works within that.”

And what does Karan Johar make of the fad of cross-over films? He retorts: “Once you cross, it’s all over! Why look at eyeballs elsewhere when you have so many in the country.” To buttress his argument, he cites the instance of Hollywood studios setting up base in India.

“I only make those movies that I would like to watch myself. I don’t have any specific target audience in mind when I am making a movie,” says Johar, reacting to charges that his silver screen products pander to NRI tastes. However, trade analyst Komal Nahta, Editor, Film Information and The Film Street Journal, has a different take on the issue. “While his movies are no doubt a visual delight, he caters more to the NRI and urban audience, having realised that the money is in the cities,” points out Nahta.

Of course, the audience has given a thumbs-up to Johar and his brand of cinema —his outfit Dharma Productions bringing in over Rs 300 crore from his movies alone. And that’s just the domestic collections. Given his movies’ widespread appeal among overseas Indians, it’s safe to say they have been multimillion grossers in markets like the US and the UK.

Johar is a smart marketer, feels brand consultant Harish Bijoor. “He plays it quite safe in his choice of subjects and doesn’t do edgy cinema, like say Black or even a Cheeni Kum,” observes Bijoor, CEO of Harish Bijoor Brand Consults Inc. So, is Johar marketing’s biggest success story in Bollywood?

“Absolutely,” says Bijoor and adds, “though you have to admit that along with the hype there’s also substance without which a brand cannot sustain itself. One can say that he’s 60 per cent substance and 40 per cent hype but even that number is quite high—which leads to a perception that he is more hype than substance.”

Chopra, while agreeing with Bijoor’s assessment of Johar’s high media visibility, says he is not the kind of person who exploits media attention. According to Taran Adarsh, Editor, Trade Guide, and a keen industry watcher: “He has definitely become a brand— evident from the offers of endorsements he gets.”

At current count, Johar endorses four brands— Timond watches, Dunhill, Dulux Paints and Bru coffee— rivaling some of the stars who feature in his movies in terms of audience appeal. Johar, say industry watchers, was probably the first among the new breed of directors who didn’t just stick behind the camera but also posed in front of it—heralding the arrival of the celebrity film maker.

Today, he is a sought-after speaker at various fora, having also been invited to speak at Wharton Global Business Forum 2007. “Today’s film makers are ambitious and Johar certainly has the glam quotient associated with him—not least due to his media accessibility and the famous association with Shah Rukh Khan,” avers Bijoor.

And tomorrow does come...

Johar, who has also expanded his reach into television— first through his celebrity talk show Koffee with Karan and then through his tie-up with NDTV for creative inputs for its Hindi GEC—is streamlining his production outfit Dharma Productions. “While I’m expanding my production base, my priority for the future is to stick to budgets—given that corporate culture is fast creeping into the movie industry,” he elaborates. “From 2009 onwards, my endeavour is to have only three releases a year—till about 2011. Beyond that, I’ll take a call on whether to continue with this model or not. I believe in taking baby-steps and not planning too far ahead,” says this late-riser who’s usually in office by 11 am.

Not that he needs to push himself anyway. Today, Johar is said to be in a league of his own—his association with a movie is enough to guarantee a spectacular opening at the box office, not just in India but also overseas. Stars, it seems now, are not just the ones on the 70 mm screen but also behind it.
TweetYoutube