Developers are fighting hard to hold their prices, while buyers are betting on a fall. Here's the thing: real estate prices will correct, but you can rule out a crash.

After years, a ray of hope is streaking through for the Mitras of Noida. It's been four years since the family of three-father, mother and daughter-moved to the National Capital Region (NCR), but despite being a solidly well-off middle-class couple, the husband and wife haven't been able to buy a house of their choice, which in their case, translates into a 2,000 sq. ft apartment with basic amenities such as power back-up and round-the-clock water and security. Real-ty check
At Rs 5,000 a sq. ft, the modern apartments in Noida have been out of reach of the white collar, 30-something couple. A fortnight ago, though, the Mitras' dream of owning a home in NCR seemed within reach. A canny investor, the husband sensed that a slowdown in the economy-more specifically the 20 per cent drop in the Sensex over the last four months-would probably be hurting real estate developers. So, on a recent Sunday, he paid a visit to a couple of developers who have ready-to-move apartments for sale.

Starting with a rack rate of Rs 4,750 per sq ft for a 1,950-sq-ft apartment in Noida, complete with power and water back-up, club-house, swimming pool, jogging track, and the works, Mr Mitra managed to bargain down to Rs 4,000 per sq. ft-an almost 20 per cent discount unimaginable even at the start of this year.

So, did the Mitras sign up for the apartment? No, because Mr Mitra thinks that prices will drop some more in the months ahead and he would rather wait and watch than buy at a rate that he still believes is excessive. The story of the Mitras could be the story of the Chadhas or the Subramaniams or the Chitales across India. It's wait and watch for now. Those who are yet to buy their first homes are holding off in the hope that prices will fall further, while those who have already invested in their second or third homes for investment purposes are wondering if they should exit at current prices, lest they drop.

So, what should you do? Buy or sell your apartment now, or wait? 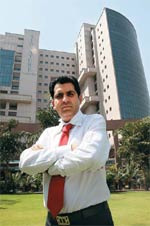 Sanjay Chandra
To answer that question, one needs to understand what's really going on in the real estate market in the country. First of all, realty in India is largely about residential housing -it makes up 75 per cent of the $15-billion realty market, while commercial space, including office and retail, account for the rest. Therefore, from a macro-economic standpoint, any trouble would stem more from housing than commercial realty.

It's well known what has happened to residential prices over the last seven years: they've shot through the roof across the country (and the world, actually). In hot property markets like Delhi's NCR region, specifically in Gurgaon and Noida, prices have shot up some 500 per cent in just six or seven years, with builders competing (or colluding) to put out pricier properties in the market. Why did prices soar the way they did? Simply because both the economy and the stock market were on a burn, growing at unprecedented rates. IT companies and BPOs were expanding, modern retail was creating demand for quality space, as were hospitality and life sciences sectors. Ashish Puravankara
That apart, interest rates, thanks to low inflation, had halved in a matter of a few years, prompting millions of Indians to buy houses. As the demand for housing (and commercial space) surged, property prices shot up too, partly due to rising prices of land and raw materials such as cement and steel. Now, as the economy betrays signs of slowing down, the real estate industry is slowing down to catch its breath, too. "The US subprime crisis, the rupee-dollar equation, inflationary pressures and the resultant liquidity crunch-all of these contributed to an economic slowdown, which was not totally unexpected," says Sanjay Verma, Executive Managing Director (South Asia, Australia and New Zealand), Cushman & Wakefield.

The question investors-not just those buying a house or office space, but those who've invested in real estate companies-want answered is simple: is the real estate bubble bursting, if yes, who will get hurt and how much? While it's impossible to answer that with certainty, it's easy to say what won't happen almost certainly: a crash in prices. 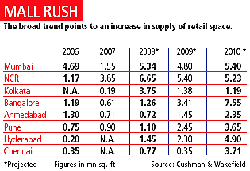 Here's why: a crash, like what's happening in the US currently, happens when there are more sellers than buyers in the market. In India, that's unlikely to happen for several reasons. One, the economy is still growing at more than 8 per cent, so people on an average are getting richer with every passing year. Two, millions of Indians still don't own homes; in fact, in cities such as Delhi and Mumbai, nearly half the population lives in slums, which means there's a huge latent demand that exists (but for low-cost housing).

Three, only a small percentage of the population that drove India's housing boom-the middle and upper middle class consumers-owns multiple homes; most of them live in the house they've bought. Therefore, even if their home loans get expensive, as they are now, they would rather cut back on savings and consumption than put out their house in the market (Home turf no more).

That leaves the speculators- for the sake of convenience, let's just think of them as multiple home owners-as the only variable in the realty equation. Among those, the ones who've suffered losses in the stock market would probably look to sell the property bought in hope of quick appreciation. (In fact, they are being blamed for the drop in prices; more on that in a bit.) But the others who are fairly confident of their future cash flows would probably turn to rental income to partly meet their mortgage obligations, if any. "Real estate in India is usually a family investment representing social security. If you see, the default rate for home loans is very low. Besides, buying a house here is never a short-term decision-it's a long-term purchase," says Niranjan Hiranandani, Founder and MD, Hiranandani Constructions.