Click here to Enlarge
The economy has begun the new year firmly in grip of a downturn and the job landscape is littered with freezes. The bad news—don’t expect a respite for the next two quarters, at least. Here’s why. As uncertainty on the jobs front deepens, cutback in household spending will rise. If consumers curtail more expenditure, business sales and earnings shrink further. The collapse in profit margins and lack of demand will force companies to freeze hiring or even implement lay-offs. This becomes a vicious cycle. And India Inc. is in the midst of one as the Business Today-TeamLease Employment Outlook Survey (January-March 2009 quarter) indicates.

In the survey, the Net Employment Outlook (the difference between the percentage of respondents reporting an increase in hiring and those expecting a decline) stands at 34 per cent, a drop of 30 index points from the last quarter and a drop of 46 index points compared to this quarter last year. Spread across eight cities—Mumbai, Delhi, Bangalore, Kolkata, Chennai, Pune, Hyderabad and Ahmedabad—the survey drew responses from 492 companies.

The Business Outlook has also plunged 50 points for the January-March 2009 quarter to record low of six points, compared to 56 points in the last quarter, an indication that there is a decisive downturn and that Indian employers are reporting a much slower hiring pace as compared to the last quarter and year. 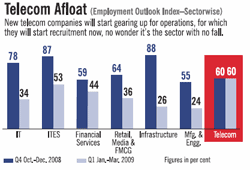 Click here to Enlarge
Says Sampath Shetty, Vice President (Permanent Staffing), TeamLease Services: “The business outlook for the first quarter of 2009 has been completely undermined with a series of disastrous socio-economic events in the last quarter. The impact has been broadbased across sectors and companies, which has left no scope for positive projection in the near future.”

Here’s how the sectors stack up for you. The hiring intentions are low across the spectrum, but the worst off are manufacturing & engineering along with infrastructure.

Tapan Mitra
The performance of automobile sector, in particular, has been dismal. Says Tapan Mitra, Chief (HR), Apollo Tyres: “Barring a few companies, which are in an expansion mode, organisations across the board have been religiously following complete hiring freeze policy. Due to a huge demand-supply mismatch, there are increasing instances where companies have to cut down on production by shutting their factories for 7-10 days.”

At Jones Lang LaSalle Meghraj, senior executives have voluntarily taken a 5 per cent pay cut recently. The company says the cut is not driven by the need, but rather carries symbolic importance to show employees that there will be tough times ahead for everyone. Says P.B. Nageshwar, Head (HR): “There’s humungous pressure on the company to control its costs by actively looking for redundancies and non-performing assets. Except in a few cases of replacement, hiring freeze has been evident across all the levels.”

It’s a mixed bag for IT and ITES sectors. Some like Shetty say that the outsourcing sector has bottomed out and will not see a further fall. “With the recession in the US, we see quiet a few outsourcing deals favouring business for the Indian IT/ITES industry,” he says. Click here to Enlarge
Surely, companies worldwide are looking to innovate by creating new business models to establish a niche for themselves amidst competition. “Many companies, including Yahoo!, in India are strategic centres and hub for global innovation. Such a scenario most certainly opens up a bevy of opportunities in the midand senior-level positions. R&D captives will continue to hire at these levels,” says Pranesh Anthapur, COO, Yahoo! India R&D. Yahoo! will grow mostly in Bangalore while other services firms may increasingly recruit from Tier-I and Tier-II cities. MindTree CEO Krishnakumar Natarajan predicts that the hiring activity in IT in the current quarter might happen more in captive centres. “Product centres wanting to reduce costs in a hurry will be where hiring will take place. These product centres are distributed more in Bangalore and Pune. So, the impact will benefit these two cities.”

Krishnakumar Natarajan
For the retail industry, January-March quarter will be lean. “Every year around this time, a drastic dip in the consumer buying takes place... with the current economic slowdown, you’ll find that the retail industry is under immense pressure, says Sanjay Jog, Head (HR), Pantaloon Retail. The company plans to hire 700-800 frontline managers in the next 3-4 months.

In media, only companies with strong financial muscles are recruiting people at the moment. FMCG sector, which has huge pent-up demand in the Tier-II and Tier-III towns, will continue to follow cautious hiring, says E. Balaji, CEO, Ma Foi Management Consultants.

However, a lull in hiring across India Inc. could spell out opportunities elsewhere. According to T.V. Mohandas Pai, Director (HR), Infosys Technologies, this is the golden opportunity for the PSUs to start hiring. “Most nationalised banks will double their business in the next five years, and they currently don’t have a highly-talented workforce. The government should instruct PSUs to hire now. It will take lot of slack from the market,” he says.

Cashing in on insecurity