Critics believe that the Indian Companies Act 1956 is unwieldy and too complex. A new Act to replace the archaic law governing India Inc. will become a reality once the new Companies Bill, which has been approved by the Union Cabinet, is passed by Parliament. Rishi Joshi brings you the key points in the Bill.

If you have an entrepreneurial bent of mind and want to go it alone, you could soon be allowed to form your own One-Person Company. Or, you may soon be able to cast your vote as a shareholder at company AGMs through e-mail. There's more: very soon, you will be protected against the scourge of insider trading on the stock markets as it will become a criminal offence. Yes, all this will become a reality once the new Companies Bill, which has been approved by the Union Cabinet, is passed by Parliament. 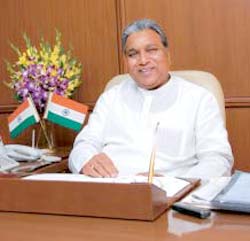 Premchand Gupta, Company Affairs Minister
Indian companies are now governed by the archaic Indian Companies Act, 1956, which, critics believe, is unwieldy and too complex. Indeed, it's felt that the Act, which is the longest Companies Act in the world, actually deters domestic companies from establishing and scaling up operations. The existing Act is based on its predecessors from the British Raj. Says Kunal Rajpal, Associate, J. Sagar Associates, a leading law firm: "Many antiquated British-era provisions continue to govern Indian companies. Ironically, these provisions have been repealed long ago in the UK." Adding to this troubled legacy is a bunch of ridiculous clauses added during India's long and economically fatal tryst with socialism. Result: the Companies Act has more than 800 provisions, many of which are no longer relevant. Says Company Affairs Minister Prem Chand Gupta: "We have reduced the number of provisions in the Bill to half. The idea is to have laws that are easy to understand and implement." The new Bill will also introduce far-reaching changes in the regulatory environment for the corporate sector, empower shareholders and limit the government's role in business.

The complete Bill will be available only after it is introduced in Parliament, but the ministry has shared with Business Today comprehensive details of the proposed legislation. Broadly, the Companies Bill, 2008 "seeks to enable the corporate sector in India to operate in a regulatory environment of best international practices that fosters entrepreneurship, investment and growth".
We take a look at the key proposals in the Bill:

Consider this: over 40,000 cases are pending in courts for minor offences where, in some cases, the penalty is a maximum of Rs 2,500. The biggest objective of the exercise to overhaul the Companies Act is to introduce simpler laws that will make compliance easy.The Bill promises:

This is another focus area in the new Bill. Gupta says that the objective is to encourage "self-regulation with accountability". The objective is to minimise the role of the government in internal corporate matters.

There are several key provisions in the Bill, which will improve the standard of governance in the country. The Bill stipulates: