This picturesque town in West Bengal's Hooghly district has long turned into political hot potato over Tata’s land acquisition. Kushan Mitra tells the villagers’ side of the story. 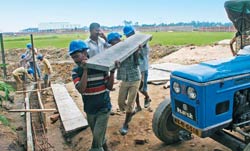 Work in progress: The retaining wall is still going up at Barohathkalitola, at the rear of the plant
The rear wall of the massive plant that Tata Motors is building for Ratan Tata’s dream “people’s car”, the Nano, is a few hundred yards away. Between the wall and the road that I find myself on are verdant paddy fields, with freshly planted paddy saplings and a couple of homesteads towards the left. All in all, this pastoral image is exactly the same as it has been for centuries on the Gangetic delta of southern Bengal. To some, the massive factory in the background is an eyesore and to many others, it is a ways and means of robbing the livelihood of those families who have worked the land for generations.

Or is it? BT photographer Debashish Paul and I spent a day in the villages where the land has been appropriated, speaking to people, not the leaders at the gates of the factory. Sure, the latter we also spoke to, but in the course of the day, a puzzling picture emerged.

We were helped by Falguni Banerjee, a trustee of the local Tarakeshwar Mutt as well as a stringer for a national daily and several Bangla publications. In the village of Beraberi, at the heart of the plant, things are strangely positive. Of the three Gram Panchayats, which have lost land to the Tata plant, Beraberi has lost the most. Approximately 700 acres out of the 997 acres allotted to the factory and the associated ancillary plant have gone from this village.

There was not a peep of protest, no banners, no sloganeering. Most villagers are sorting the potato crop harvested before the monsoons. On our way, we run into Kushal Saha, a schoolteacher at the Beraberi Surjonarayan School and one-time Gram Pradhan for the opposition Trinamool Congress at Beraberi.

Voice of Dissent: Proshanto Singha whose land is being walled in
He lost two-and-a-half bigha (just under an acre) of land to the plant and is today one of its most enthusiastic supporters. “Mamata Banerjee expelled me from the party because I refused to support the andolan (movement) any more,” he says. “But I have no regrets, we are already seeing the economic benefits of the plant. My students, the younger generation of this village will reap the benefits of this economic activity.”

Dibakar Das
Saha and his friend Abhijit Maal, who lost around six bighas (two acres) of land, point out another truth. “The protestors are saying that this was fertile land with four crops a year. I farmed this land. Much of this land, more than three-quarters, is doobojomi (floodland). If it rains too much, it goes underwater.” This is a fact that Tata Motors learnt to its cost, when large tracts of the plant construction went underwater during the monsoons of 2006 and 2007.

Kushal Saha
Managing Director Ravi Kant recently admitted that the floods had increased the cost of construction. We head down to the town of Singur, and contrary to popular perception, it is not a small village, it is an old town en route to the Tarakeshwar Mutt, one of Bengal’s holiest Hindu sites. In the Gram Panchayat elections in May this year, the Opposition Trinamool Congress swept to power in the Singur block, winning all 16 panchayats. Bacharam Manna, Vice Chairman, Singur Panchayat Samiti, is a long-time andolan leader, even though he hasn’t lost much land. “While we do not protest against the Tata plant, we want 400 acres back, which farmers do not want to give up; the other 600 acres is not so good; why must the ancillary factories be there? This is important from the point of view of food security. We do not want industry that displaces farmers; we want industry that encourages farmers,” he rails.

Manna suggests that the government should set up a distillery in the area to utilise the potato crop and make vodka and refuses to be convinced that most vodka today is grain-based. As for the growing local sentiment for the plant, “Those people are liars. If the people of the area supported the plant, would we see such protests and such an overwhelming election victory in May?”

At a point called Barohathkalitola just outside Beraberi, where work is continuing on the remaining wall of the plant, we run into Proshanto Kumar Singha, another leader of the Krishi Jomi Rakhha Committee (Farmers Land Preservation Committee). “These are my three-and-a-half bigha. Why should I give it up? I don’t want any compensation, no amount of money can buy my land,” he says.

But, as Probir Ghosh, another land-loser and now a member of the “Syndicate”, a group of local entrepreneurs who are running an enterprise providing construction material to Shapoorji-Pallonji, the company fabricating the plant, is more positive. “See, I will be honest, I am making a lot of money nowadays, more than I ever did from the land. There will be more economic activity, thanks to the plant,” says Ghosh, who is also a local Trinamool leader. Dibakar Das, a local CPI (M) leader was the Convenor of the Land Collection Committee. Says Das: “Strange, isn’t it? For two years, they (the Opposition) said that their problem was with the Tatas, but today they say the problem is with Buddha (Buddhadeb Bhattacharya, Chief Minister, West Bengal). This is all about politics and land valuations. The value of the land has gone from Rs 12 lakh per acre when we acquired it, to over Rs 60 lakh per acre now.” 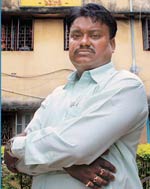 Bacharam Manna: Spearheading a movement against the Tata plant
Later that afternoon, we visit a Sammadhik Sammelan organised by Das and attended by the top brass of the Left Front including Lok Sabha members Roopchand Pal and Anil Basu, CPI(M). “We will do all that is possible to start the plant because it is a vital step in the reindustrialisation of Bengal,” says Basu. He specifically points out the protest that Mamata Banerjee is threatening with from August 24, when she plans to block the Durgapur Expressway.

Pal, who is also the Member of Parliament for Hooghly, the constituency under which the factory falls, says: “The day the cars start rolling out of here, all Bengalis will be proud, and I will be especially proud. What I do not understand is the Opposition’s steadfast resistance to the factory.”

Finally, we call up a Tata Motors executive who first apologises for not letting us in the plant, “I would love to, but I can’t. The plant is on track and the first preproduction cars are on the line, he adds, “we should have everything ready in the time-frame we have already announced, that is October-November.”