Time for a trim

With job creation at a standstill and job protection being the prime concern, talk of salary hikes sounds out of place. But knowing how well you are paid compared with your peers in other industries will help. 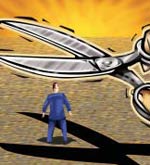 Your boss can’t stop talking of cost cuts. He has also hinted that the top management is taking a salary cut to help the company tide over the downturn. Where does that leave you as far as the prospects of an increment in April is concerned? If you are a junior manager— which is what this installment of BT-Omam Consultants Survey deals with—your prospects may not be as bad as your boss’s. But only just about. The one cost head that had risen the fastest in the recent years is wage bill. It is also the one that is under highest scrutiny now.

Four factors govern the salary hike in any organisation. These are: individual performance, company performance, company’s future business plans and current inflation rate. Of these, two— company performance and its plan—are dogged by downturn and uncertainty. Inflation, after a spike, has begun to fall and is likely to fall below 5 per cent in the next two months. That leaves individual performance. But even that will be limited by the prospects of the industry you work with.

Click here to Enlarge
The Sixth Quarterly BT-Omam Consultants Survey of junior manager salaries, which covers managers with an average experience of three to seven years, across a range of 14 industries and 101 companies, reveals that the going has been good in 2008 in sectors like automobiles, FMCG, telecom and IT. The lowest paying sectors, according to the survey, were textiles, engineering and real estate (See Industry Percentile). “Telecom, FMCG and consumer durables sectors will come out on top in offering higher salaries and increments,” says Kris Lakshmikanth, Founder CEO, The Head Hunters. 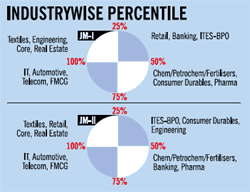 Click here to Enlarge
Consumer durables player LG Electronics India has handed out an average increment of 14 per cent to its employees in January 2009. Says Y.V. Verma, Director, HR: “It’s been healthy on the business front; the increments reflect that.” In January 2008, the average increment at the company was a little over 15 per cent.

However, some like E. Balaji, CEO, Ma Foi Management Consultants, say that the subdued economic sentiment will have an across-the-board impact. “Salaries, hikes, increments will stabilise across the spectrum in 2009,” says Balaji. This is in complete divergence with the first half of the fiscal 2008-09, when India Inc. was on a roll. At present, there are lesser jobs in the market compared to last year. Also, lateral hiring is less, as companies restrict investments in new ventures. 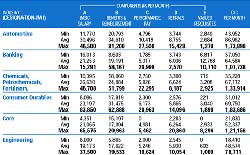 Click here to Enlarge
The variable pay component will also come down. Rakesh Sharma, Executive VP, HR, Dabur Pharma, adds: “The salary increase will be lower compared to last year; focus will be more on performanceoriented pay rather than fixed pay.”

Another key consideration while deciding the increments will be how crucial a particular function in an organisation is. For example, functions such as business development, technology and operations carry a premium compared to functions like human resources and supply chain or in some cases, finance.

Compensation experts say that for junior managers, increments will stabilise at 8-12 per cent in 2009, on average, compared to 15-20 per cent last year. However, things will pan out differently at one notch above the Junior Manager level. Watch this space next issue for BT-Omam Middle Management Salary Survey.

Click here to Enlarge
Methodology
To capture compensation trends in corporate India, Business Today collaborated with the Delhi-based research consultancy, Omam Consultants, to collect data on salaries across a range of industries and companies. This survey covered junior managers with average experience of between three-to-seven years. Omam compiled salary data of Junior Managers I and Junior Managers II, across 101 companies in 14 sectors. Since salary data is confidential, names of the companies have not been revealed. The sectors covered under the survey are: automobiles, banking, chemicals & fertilisers, core, consumer durables, engineering, FMCG, IT, ITES/BPO, pharmaceuticals, real estate, retail, telecom and textiles. The survey looks at compensation data from a number of angles, including inter-industry averages, and also the average salaries. The Omam team that collated and analysed the data was led by Director Rajeeva Kumar, Executive Director Anil Koul and General Manager Ashutosh Kumar.

Banking on the White 'Tiger'