It is the first-of-its-kind referendum in India. The villagers in the Raigad district of Maharashtra decide through a poll whether they want their land to be included in the Mumbai Special Economic Zone (SEZ) proposed by Mukesh Ambani and Jai Corp. A first-hand account by Virendra Verma.

Early Sunday Morning, we (BT photographer and I) are in Pen taluka, on the Mumbai-Goa highway. Our destination is a cluster of villages that are about to witness a unique event—a first-ofits-kind referendum in India—to decide whether the villagers want their 22 villages spread over 3,000 acres to be included in the Mumbai Special Economic Zone (SEZ) proposed by Reliance Industries and Jai Corp. in the Panvel, Pen and Uran talukas. In the first village, Vashi, polling has already begun at a local school amidst tight security: 15-odd villagers are awaiting their turns to cast the votes. Polling is slow and peaceful, and villagers are busy giving sound bytes to TV channels, including a French TV crew, telling the world why the villages should be excluded from the proposed SEZ.

People Power: Villagers voting in the referendum
11.45 a.m. Village Vathe Vadav
The next village, Vathe Vadav, is the centre of frenzied activity, thanks to the presence of major TV channels covering the referendum. The villagers of Vathe Vadav are divided in their views on the issue. Some are saying they do not want to give away their lands while others are equally adamant that the crux of the matter is the value of the land. “I’m not against giving up my land, but this land has value. If offered the right price, I’m willing to sell my land,” says Vithova Madve, who owns four acres. Madve, who works as a driver for the Maharashtra State Transport Corporation, says the price offered by the Reliance Group is not acceptable to him.

Mumbai Special Economic Zone has offered Rs 10 lakh per acre and an additional Rs 10 lakh per acre as rehabilitation charges to these villagers. It has also proposed to allocate 12.5 per cent of developed land to the landlosers, in proportion to their holdings, at a price to be decided by the state government. “This 12.5 per cent developed land will have higher value for the farmer in the next 10 years,” says Anand Jain, Chairman, Jai Corp., which holds a 10 per cent stake in the SEZ. Among other SEZ dole-outs is free technical and vocational training to one member of each family that sells its land. Jain says the SEZ has also offered Rs 2 crore per village to create basic facilities. 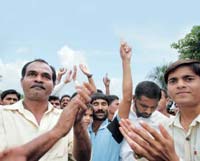 Villagers are unlikely to let go of their land: Protesting villagers shouting slogans against land acquisition and SEZ
Before the referendum, the Reliance Group had moved the Bombay High Court opposing the Maharashtra government’s decision to hold it. At the time of going to press, the case was yet to be heard by the court and the outcome of the referendum was not yet out. However, villagers are unlikely to relent. “This land has been owned by our family for more than 100 years; I will not sell out regardless of the price I’m offered,” says Dev Ram Narain Thakur Borje, who works for the Railways in Mumbai. Borje, whose children are also employed in various government departments, says his relatives in nearby villages are also not willing to part with their lands. “Once the water from the Hetavane dam starts flowing, the produce from my fields will increase multi-fold,” he says. Borje grows paddy and rainwater is the only source of irrigation.

By noon, agitated villagers form a group and start shouting slogans against the acquisition of land. Social activists are busy doing their bit “helping” farmers. “We are against these 22 villages in Pen taluka being included in the proposed SEZ, as it is fertile land,” says Ulka Mahajan, an activist with SEZ Virodhak Sangarsh Sanghathan. Once the Hetavane dam becomes operational, the region will get water for irrigation, she says, adding that this will bring good times for farmers and their land. The Hetavane dam, incidentally, was proposed in early ’80s and is yet to be completed. That leaves the farmers in the region critically dependent on rainwater for irrigation. Voice of dissent: Ulka Mahajan doesn’t want the villages to be part of SEZ
The dam itself hasn’t been without its fair share of controversies. In 2004, three villages—Kalve, Sonakar and Udaoli—had written to the state government demanding that canals from the dam should not pass through these villages. Their argument: the canal water will keep the land around it wet throughout the year, leading to lower productivity in the fields. Raigad District Collector Vinayak Nipun tells us: “The matter (proposed canal) is being looked into by the state agriculture department and the report is awaited.” On the referendum, he says the opinion of the villagers is being analysed and a final report will be sent to the state government in the first week of October. 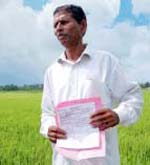 Hope remains: Dev Borje finds it worthwhile to hold on to his land
As we move to village Kaleshri, villagers warn us not to go to the polling booth as we could be mistaken for Reliance representatives and attacked. On investigation, we realise the villagers in Kaleshri are opposing the move to acquire their lands. What has upset them is that the head of the village panchayat has spoken in favour of the inclusion of the village in the SEZ in a local paper. While most villagers are defiant, a Jai Corp. executive says the plans for the SEZ will not be affected. This is because in the first stage, the Reliance Group and Jai Corp. plan to set up the Navi Mumbai SEZ, for which 4,500 acres of land has already been acquired. For the Maha Mumbai SEZ, close to 5,000 acres of land is under possession, which excludes the 22 villages that participated in the referendum.

Back in Mumbai, we try to gauge the villagers-versus-SEZ stakes. V.N. Dhoot, Chairman, Videocon Group, says farmers should get their due while selling their lands and that land acquisition should be based on mutual agreements between buyers and sellers. “If a farmer is not willing to sell the land, you cannot do anything,” he says.
TweetYoutube