There are fewer new entrants in BT 500 this year, and their market value is also lower. As various investment avenues like real estate, gold and fixed deposits were going through a series of crises, the stock market was thriving, mainly due to domestic investors. The BSE Sensex went up by around 16 per cent and seven per cent in the years ending September 2018 and 2019, respectively. But the fast-paced ride was not enough to enthuse companies to come out with initial public offerings (IPOs).

Besides, the new entrants have a total market cap (full year average) of Rs 81,646 crore, just one-sixth of the valuation of new entrants in the 2017-18 period.

The biggest new player in the list this year is cement manufacturer Dalmia Bharat, which had a full-year (October 2018-September 2019) average market value of Rs 19,334 crore and stands at 136th position in BT 500. However, its value has seen a fall of almost 20 per cent to Rs 15,844 crore (as on November 5). The company posted a consolidated profit of  Rs 349 crore on a revenue of  Rs 9,484 crore in the quarter ended September.

Last year, the highest ranked new entrant in BT 500 was HDFC Life Insurance, with an average market valuation of Rs 90,909 crore. In fact, including the life insurance arm of HDFC, a total of four insurance companies - SBI Life Insurance, General Insurance Corp. of India and The New India Assurance Co. - were added for the first time in the top 100 list. Another new entrant last year was Bandhan Bank, which had launched its IPO in March 2018, and entered the top 50 with an average market cap of Rs67,666 crore in 2017-18.

This year, the second biggest addition this time has been Adani Gas. It stands at the 178th position with an average market value of Rs 13,943 crore. The latest numbers show that its value went up further to Rs16,145 crore (November 5), after news of a strategic investment by French oil major Total SA, which will buy 37.4 per cent stake in the company for Rs5,700 crore, came out.

Polycab India is the third largest new entrant, which is at the 241st spot with a market cap of Rs 9,083 crore. The company is in the business of manufacturing and selling wires and cables and fast moving electrical goods under the Polycab brand. The stock surged 24 per cent in the last two weeks of October, based on doubling of profit to Rs194 crore in the September quarter versus last year. 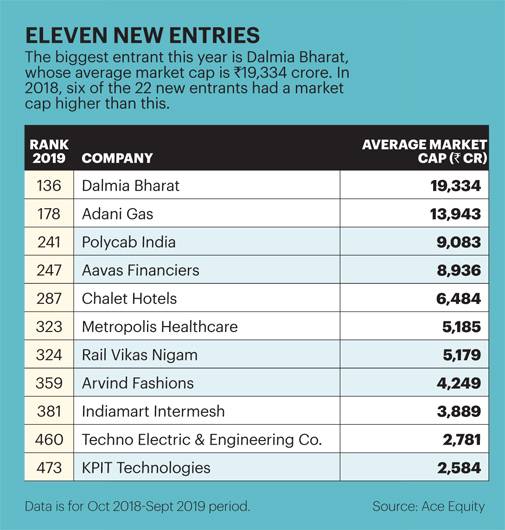 Jaipur-based lender Aavas Financiers is another noticeable entrant in BT 500. It is primarily in the business of providing housing loans to customers in low and middle income segments in semi-urban and rural areas. The average market valuation of Aavas stood at Rs8,936 crore in the one-year period until September 2019. However, the value went up further to Rs11,536 crore (November 5).

Chalet Hotels, a K. Raheja group company, is the fifth largest new entrant in BT 500 at an average market cap of Rs 6,484 crore. The hospitality giant, which develops and manages high-end hotels of Marriott group in key metro cities, came out with its IPO in January 2019, which was fully subscribed.

Metropolis Healthcare and Rail Vikas Nigam are the only two other new companies in BT 500 which crossed Rs 5,000 crore valuation. The remaining four of the new entrants this year - Arvind Fashions, Indiamart Intermesh, Techno Electric & Engineering Co. and KPIT Technologies - have average market caps in the Rs2,500-4,200 crore range.

Lower-than-expected valuations have forced many companies to defer their IPO plans in 2019. Market analysts say that the current stretch of weakness in the IPO market is likely to continue for some time and fund raising through IPOs in 2019 could well be the lowest in five years.