Automation, regulatory pressure and fears of a downturn resulted in heightened volatility in the IT/ITeS space. But unlike other industry segments such as FMCG or automobile, market leaders in this sector managed to do well, with leading stocks witnessing a 16.6 per cent jump in average market cap, while the aggregate market cap of BT 500 companies fell 1.5 per cent. The numbers are not as strong as expected from the once red-hot industry but analysts call it a temporary blip.

In its 'Outlook for the Global IT Market', Gartner predicts 3.7 per cent growth in 2020, primarily due to enterprise software spending. "The slowdown in IT spending in 2019 is not expected to stretch as far into 2020 despite concerns over recession and companies cutting back on discretionary IT spending," says John-David Lovelock, Research Vice President at Gartner.

Closer home, things could be improving fast as IT behemoths are pursuing talent localisation in markets outside India to counter regulatory headwinds and shifting their focus from legacy services to digital-only areas in tune with global requirements. These initiatives mean there is not much fear of obsolescence and Indian IT stocks remain expensive. 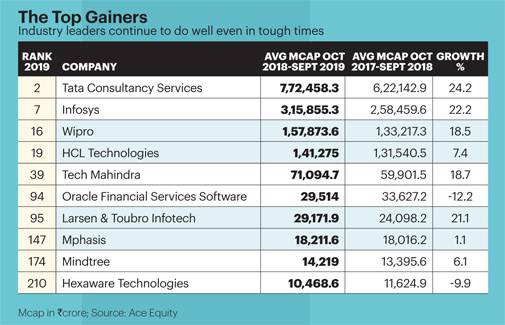 Three stocks, however, outshone the rest, with high double-digit market cap surge and sustained returns. These included Tata Consultancy Services (TCS), Infosys and Wipro. IT sector leader TCS retained its second spot in the BT 500 list as its average market cap grew 24.2 per cent to Rs7,72,458.2 crore during October 2018-September 2019 from Rs6,22,142.9 crore in the year-ago period. But its recent cautious commentary (led by weak BSFI outlook and retail headwinds) worried several brokerages who rated it from 'buy' to 'neutral'. In a report dated October 11, HDFC Securities said, "We downgrade TCS to 'neutral' ('buy' earlier) and strike it off our list of conviction picks following 4 per cent earnings per share cut and a weak growth trajectory (core verticals/deceleration in digital)."

In 2018, the company completed a Rs 16,000 crore share buyback to distribute cash among shareholders. With its valuation accelerating way beyond that of its peers, Prabhudas Lilladher, in its October report, noted that TCS was the most expensive stock (~23.3x one-year forward P/E) because of its sector-leading free cash flow (FCF) generation and disciplined policy of returning all of that to shareholders via dividend/buyback.

The FCF yield of TCS currently stands at 3-4 per cent. Although the stock was downgraded from buy to hold, the note said, "TCS's predictable cash flow generation, strong revenue momentum, stable margin, tight balance sheet and stickiness of clients will help maintain its premium valuations. We are seeing pricing pressure, and supply-side constraints are creating headwinds for margins. (But) we continue to like the best-in-class resilience of the business model."

Bengaluru-headquartered Infosys has retained its 7th spot in this year's BT 500 list. Its average market cap rose 22.2 per cent to Rs3,15,855 crore (October 2018-September 2019) from Rs2,58,459.5 crore in the year-ago period. But the latest controversy over a whistleblower's letter that alleged accounting malpractices to boost short-term revenue and profits led to one of the biggest intraday losses, with the stock falling nearly 16 per cent (eroding over $6 billion wealth) in a single day.

The company had faced a similar situation in 2017 when whistleblowers complained against the then CEO, Vishal Sikka, regarding the acquisition of Panaya and the severance pay to former CFO Rajiv Bansal. But this time, the stock corrected after Infosys said it would conduct an independent probe and no proof had been submitted by the whistleblower yet.

Sharekhan observed that "in earlier whistleblower allegations in 2017, the stock's multiple was also de-rated from 20x to 13x. Hence, we believe that the recent issue is likely to loom over the stock in the near term as it will divert management attention and affect performance". This year, Infosys also went for a share buyback, the second in the company's history.

The company repurchased nearly 11 crore equity shares at an average price of Rs747 each and spent around Rs8,260 crore. But the stock remains attractive compared to TCS. Right after the announcement of its second-quarter results, Motilal Oswal said in its report that "over 1HFY20, it had outperformed TCS on growth. However, over the medium term, the performance of these companies is likely to converge. We expect a CAGR (FY19/21) of 9.3 per cent in constant currency revenue and 11.5 per cent in EPS (earnings per share). The stock price discounts FY20/21 earnings by 21.5/18.5x - a 10 per cent discount to TCS (on FY21 multiples)."

In spite of its weak financial performance, Wipro saw its market cap grow by 18. 5 per cent from Rs1,33,217 crore to Rs1,57,873.6 crore during the period under consideration. The company has also moved up three places, from 19 to 16, in this year's BT 500 list. Interestingly, Wipro saw a leadership change as Azim Premji stepped down on July 31, making way for his son Rishad, who came in as the new Executive Chairman. In his last letter to Wipro's shareholders, Chairman and MD Azim Premji said that the company would remain committed to enhancing shareholder value.

"Our EPS for the year ended March 31, 2019, grew by 18.6 per cent YoY, which was the best in the last five years. We improved our working capital substantially and our free cash flow was robust at 106 per cent of our net profits. We have a capital allocation philosophy of providing a regular and stable payout to investors, keeping two important considerations. One, that of building long-term stakeholder value and two, making required investments for growth."

This year, Wipro, too, concluded a buyback of 32.31 crore equity shares, which resulted in a cash outflow of Rs10,500 crore. Post that, the company reported a YoY revenue growth of 3.8 per cent in constant currency terms in the second quarter of FY2019/20. Brokerage Motilal Oswal said, "Our constant currency revenue estimates for FY19/21 have been moderated by 0.4-1.1 per cent. We do not make any meaningful revisions to our margin estimates. However, our FY20 EPS estimate is upgraded by 3 per cent due to the lower effective tax rate expectation. Wipro's overall growth continues to lag peers, given company-specific execution challenges."

Several midcap stocks in the ITeS space failed to deliver due to internal issues. Take, for instance, Mumbai-based Vakrangee, which fell from 142 to 362 in this year's BT 500 ranking. Its market cap plummeted 78.7 per cent, from Rs19,741.9 crore (October 2017-September 2018) to Rs4,206.4 crore (October 2018-September 2019) - it is not even a billion dollar firm now. After the company's statutory auditor PwC flagged off compliance concerns and resigned suddenly, the Ministry of Corporate Affairs ordered an inspection of its books of accounts for three financial years. However, the investigation found no wrongdoing. The Securities and Exchange Board of India also investigated trading activities of certain entities on the stock but did not find any instance of stock manipulation by the promoter or promoter group entities. A probe conducted by the Economic Offences Wing on price and volume manipulation also found no merit. Since then, the company's stock has been recovering.

The other IT stock that eroded investor wealth was Infibeam Avenues, India's first listed e-commerce company. Its ranking in the BT 500 list has slipped to 452 this year from last year's 251. Infibeam's average market cap fell 70.3 per cent to Rs2,887.2 crore (October 18- September 19) from Rs9,725.5 crore in Oct 2017-Sept 2018. Last September, the stock fell 70 per cent in intraday trading over rumours that it was advancing huge unsecured loans to a subsidiary. Earlier this year, the company fired one of its joint statutory auditors, S.R.B.C & Co. (affiliated to EY), for data breach. The company alleged that its auditors had leaked unpolished price-sensitive information, thus resulting in a breakdown of trust in auditors. In the latest quarterly earnings, Infibeam's consolidated profits stood at Rs25.9 crore compared to Rs7.6 crore in the corresponding period of the previous financial year. The company also declared a 10 per cent dividend.