Battle of the Titans

The investments of Facebook and Google in Jio Platforms have cemented RIL's position, catapulting its market value and putting it way ahead of TCS in the No.1 spot 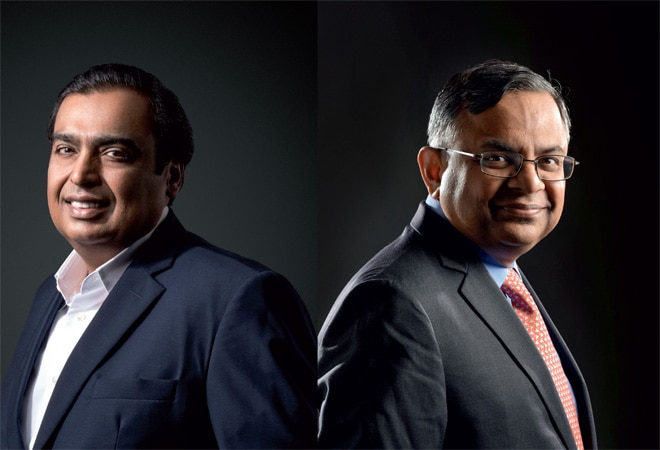 In early March, when the government was contemplating a nationwide lockdown to control the spread of coronavirus, billionaire Mukesh Ambani's core team was in the last lap of negotiations with global tech giants Facebook, Intel, Qualcomm and a slew of foreign private equity investors, inviting them to invest in Jio Platforms (JPL), the telecom and digital subsidiary of Reliance Industries (RIL). Talks with Google were also shaping up, though there were differences on valuation. The lockdown had a devastating effect on the economy - factories grounded to a halt, migrant workers rushed to their home towns, the stock market crashed and banks counted on possible loan defaults. On March 23, RIL's share crashed to Rs 875 from its January high of around Rs 1,500.

A month later, on April 22, JPL announced sale of 9.99 per cent stake to Facebook for Rs 43,574 crore. Over the next three months, when everyone was working from home, 13 more deals, ending with the Google investment of Rs 33,737 crore for a 7.73 per cent stake were done. Ambani sold 32.97 per cent in JPL to raise Rs 1.52 lakh crore, amazing industrialists who were confined to their homes. These deals resulted in the average market cap of RIL during the October 2019-September 2020 period touching Rs 10.5 lakh crore, a 35 per cent rise over the previous year.

That's exemplified by the way RIL's share hit a peak of Rs 2,369 in mid-September, from the low in March, scripting a 170 per cent rise in six months. The market cap crossed Rs 15 lakh crore for the first time for any Indian company. Apart from the JPL deals, another subsidiary, Reliance Retail Ventures (RRVL), raised Rs 47,265 crore by selling 10.52 per cent stake to seven private equity giants, including Silver Lake, KKR, General Atlantic, Mubadala and ADIA. In fuel retail, RIL sold 49 per cent stake to BP plc and raised Rs 7,629 crore. The company also executed the largest rights issue of Rs 53,124 crore and raised 25 per cent (Rs 13,275 crore) of the total during the time of subscription in June. As a result, RIL mopped up an investment of Rs 2.5 lakh crore during the pandemic and cleared off the entire net debt of Rs 1.61 lakh crore it had in March.

The meteoric rise in RIL share prices helped the recovery of the Sensex and the Nifty from historic lows. According to brokerage house Motilal Oswal, RIL has dramatically increased its weightage in the Nifty to 14.9 per cent in September from 9.8 per cent in December last year. In comparison, total weightage of the IT sector increased to 16.8 per cent from 12.8 per cent during this period. Banking, financial services and insurance (BFSI) companies still have the highest weightage of 33.3 per cent. It fell from 42 per cent.

This is the largest difference in market capitalisation between RIL and TCS in the last eight years. TCS overtook RIL recently in March, when the latter's share price crashed more than that of the IT major. As on October 30, the market capitalisation of RIL stood at Rs 13.52 lakh crore, compared to TCS' Rs 10 lakh crore. The IT giant's shares scaled an all-time high of Rs 2,885 in the second week of October, rising over 72 per cent in seven months, thanks to its Rs 16,000-crore share buyback plan. However, RIL's share price has been slipping from the second week of October and fell the most after the September-quarter result.

Since N. Chandrasekaran, former MD and CEO of TCS, became the Chairman of the Tata group in 2017, the tech giant's importance inside the group has risen. Chandrasekaran started implementing the TCS way of doing things in other group firms. It is showing results, especially in digital transformation, e-commerce outreach and creation of businesses by realigning old ones.

There are many strong companies behind TCS in the pecking order. HDFC Bank, which overtook TCS once in 2017, stands third with an average market capitalisation of Rs 6.1 lakh crore, at a time when the Indian banking sector is struggling due to the fear of a rise in non-performing assets (NPAs). The HDFC group is also growing strong with HDFC Ltd, HDFC Life, HDFC Asset Management and Gruh Finance. In fact, it jointly overtook 29 Tata group companies once last year. Hindustan Unilever (HUL) is the only multinational in the top five. HUL, which saw a 600 per cent spike in market value over the last 10 years, saw things slow down in the last one year. HUL's market cap stood at Rs 4.87 lakh crore on October 30, followed by HDFC Ltd at the fifth spot with Rs 3.45 lakh crore.

V Srikanth, Joint Chief Financial Officer, RIL, says the market capitalisation of the company increased by more than $100 billion during March-August on the back of equity addition, including rights issue, investments by strategic and financial institutions and clear articulation of growth plans and its execution. "From the market capitalisation point of view, we are in top 50 globally and top 10 in Asia. All these activities mean that we make our balance sheet strong and all these funds support future growth plans," he adds.

TCS's net profit rose 4.9 per cent to Rs 8,433 crore in the second quarter, while revenue increased 3 per cent to Rs 40,135 crore. The company has been investing in research and innovation, intellectual property and digital upskilling of employees over the years. V Ramakrishnan, Chief Financial Officer, TCS, says there has been waves of changes happening in technology in the last couple of decades, in terms of applications, data management and communications. "But TCS stayed ahead of the curve by sensing the changes early and working with niche tech companies and the understanding new customer needs in the disruptive business environment," he adds. The company implemented the working-from-home model for employees during Covid. From a highly centralised one with large campuses accommodating thousands of employees, TCS was able to switch to a distributed delivery model, with 95 per cent of its 448,000 workforce enabled to work remotely, in a matter of days through their new operating model called Secure Borderless Workspaces (SBWS). TCS was also among the first to announce the 25x25 work model, through which only 25 per cent of its employees will need to work from office by 2025 at any point of time and every associate will be able to realise their potential without spending more than 25 per cent of his/her time in a TCS office.

During the last two years, TCS saw a slowdown in BFSI and retail, which together constitute 40-45 per cent of its business. It affected profitability. BFSI saw spending cuts, while retail went through structural changes. As a result, growth went down to below 10 per cent even before the pandemic. "We were hopeful that we will be able to get back to double-digit growth but then the pandemic came...But we see growth coming back now, and we are quite hopeful of getting back to double-digit levels," says Ramakrishnan. "In the long term, the business model, investments and the compelling factors will continue to guide us through."

RIL is also betting big on its digital vertical. JPL is foraying into broadband in a big way. It has made its network 5G-ready and is preparing for trials. It has also launched products such as JioMeet, e-learning and online healthcare services. Reliance Retail recently launched e-commerce venture JioMart in 200 cities. Jio currently has 405.6 million customers on its network, while Reliance Retail has around 12,000 stores.

The stage is set, and the battle of the biggies will be more ferocious as the market rides back to pre-Covid growth levels.