Evolving regulations and poor infrastructure are turning out to be pain points for the private healthcare sector, already struggling to manage the virus outbreak 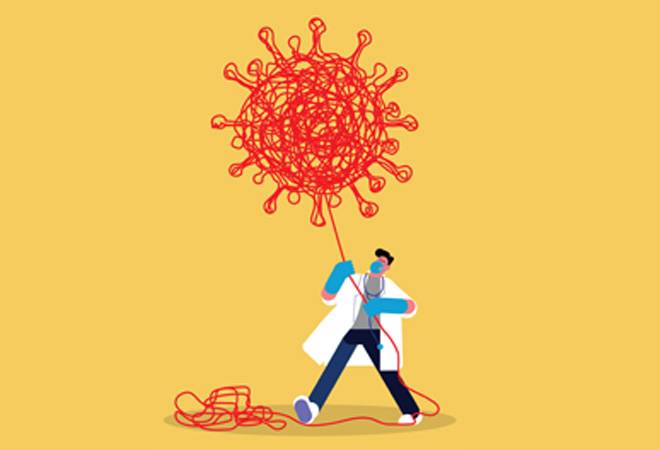 On July 13, in a rare expression of solidarity, representatives of half-a-dozen Indian private healthcare industry associations, at least a dozen heads of leading private hospitals and the Health Services Committee of industry body Ficci announced a virtual press conference. It got postponed at the last minute to July 15, only to get cancelled again, as the central topic of discussion was "sub judice." The topic, which representatives of top ranking private hospitals such as Apollo, Fortis, Hinduja, DM Healthcare and Columbia Asia wanted to discuss, was challenges due to the Covid-19 pandemic. The issue most central to this - price caps on Covid tests and treatments by central agencies, state governments and the General Insurance Council - is also being considered by courts.

Though the event got postponed, there is no relief in sight for private healthcare providers, even as the number of Covid-19 patients in India races past the 10 lakh mark. And 'unsustainable price caps' is just one of their problems. "Across India, different states and cities are in various stages of lockdown. If we talk of price caps, prices are different in different states and that is a challenge," says Ashutosh Raghuvanshi, Managing Director and CEO, Fortis Healthcare. He says 60-70 per cent cost of running a hospital is fixed and cannot be cut even when occupancies are low. Big or small, no hospital will find these prices sustainable, he says. "The caps don't match the quality of care being given at our hospitals. Our supply chains, medical equipment and hospital systems have also been affected. Manpower is a challenge as for Covid, you need clinicians from critical care, pulmonology, respiratory care. Any hospital will have limited number of these specialists," he says.

The pricing problem arises due to the huge difference in government rates and that charged by private hospitals. Delhi, on June 20, capped Covid treatment charges (for 60 per cent of total Covid bed capacity) at Rs 18,000 per day for severely ill patients in intensive care units. The Covid management package announced by Max Healthcare for the same critical patient was Rs 72,500 per day at that time. Similarly, Covid-19 RT-PCR test rates are capped at Rs 2,400 in Delhi, as against the Rs 4,500 charged by diagnostic labs. With nine lakh beds, Indian private healthcare is a Rs 2.4 lakh crore business, accounting for almost 70 per cent of secondary and tertiary care hospital admissions. It has been growing at 16-17 per cent a year for the last five years. The lockdown, and the resultant drop in occupancy in April-June, have broken this growth trajectory. Industry estimates peg operating losses during the three lockdown months at Rs 13,400-22,000 crore. Price caps have not been the villain here, though. The main reason was absence of private players from fight against Covid-19 during initial months. The period also saw hardly any non-Covid patients in private hospitals due to fear of infection and logistical problems caused by the lockdown.

Just two examples will illustrate the problem. Bengaluru-based Narayana Health, which owns, manages and operates over 20 hospitals, reported an 11 per cent growth in operational revenue in first 11 months of FY20, but ended the year with 8.6 per cent growth as business shrank in March due to spread of Covid and countrywide lockdown. Fortis Healthcare Ltd, with 28 operational facilities, says its average bed occupancy level of 65-75 per cent fell to 29 per cent in April and 35 per cent in May. 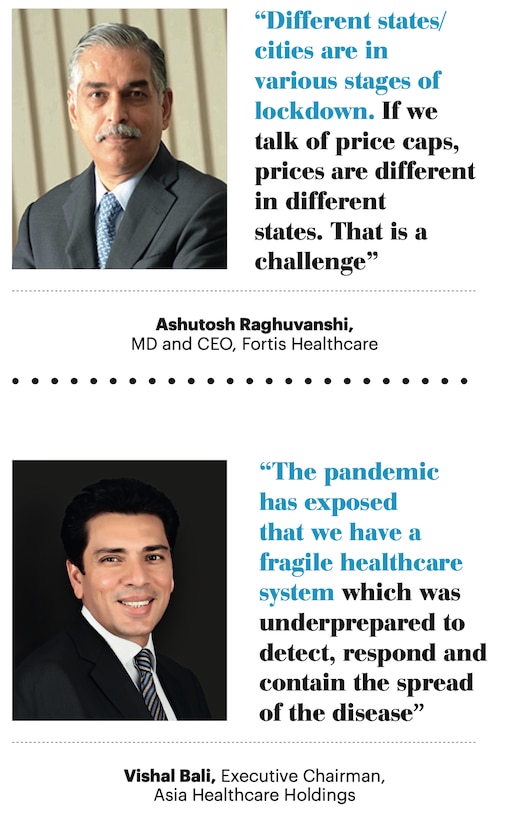 To top this, ever changing regulations, guidelines and orders from central and state governments, court orders and price caps and treatment specifications are keeping them on their toes. There are also allegations of overcharging and violation of treatment norms. Then, some of the facilities are being taken over temporarily by governments for treating Covid patients. The net result is loss of revenue, apart from fear and uncertainty, not just among patients but also among private healthcare providers.

"Our interactions with healthcare providers show that the occupancy level of private hospitals is 25-35 per cent. Outpatient consultations are not happening and tele-consultations have given only a benign push (to business). Elective surgeries have been postponed, and medical tourism, a major source of revenue for several hospital chains, has been substantially hit," says Isha Chaudhary, Director, CRISIL Research. "We expect private hospital industry revenues to contract 10-15 per cent in FY21, which has never happened before," she says.

Why are Indian private healthcare entities so vulnerable? Are they crumbling under pressure? Will they emerge out of Covid wiser, better prepared to face future challenges?

As in other parts of the world, Covid-19 took the Rs 4.4 lakh crore Indian healthcare system (public and private together) by surprise. It laid bare undersupply of doctors/nurses, inadequacy of infrastructure and import dependence for medical technology. Initially, the private sector was just an enabler on the side. Everything, right from diagnostic kit supplies to approvals to testing to identification of the disease to providing beds to patients, was controlled by the government. The private sector has come into the picture only in the last three to four weeks after the government realised it cannot handle everything on its own.

While district administrations started by taking over private healthcare facilities, the weeks that followed saw some states such as Delhi asking private healthcare players to earmark a certain percentage of beds for Covid patients. Some also imposed cap on treatment costs. The central government's health assurance packages like Ayushman Bharat fixed their own reimbursement rates for empanelled private hospitals. Private healthcare players, already hit by decline in number of non-Covid patients, found themselves underprepared to take on the massive challenge. "Over the last few decades, given the epidemiological shift in India to non-communicable diseases, the private sector has been scaling up healthcare infrastructure largely towards providing care in key specialities like Cardiac, Neuro, Orthopaedics, Oncology, GI, Urology/Nephrology and Critical Care which was needed to save many lives. While the world experienced a series of infectious diseases and pandemics like SARS, H5N1, H1N1, Ebola and MERS, the impact of these was marginally felt in India. The private healthcare ecosystem, therefore, did not have to make any significant transformation and investment over the years in infrastructure, technology or clinical acumen to combat the tsunami of an infectious disease like Covid-19," says Vishal Bali, Executive Chairman, Asia Healthcare Holdings. "Our private hospitals are designed to have a few segregated isolation and ICU beds for infectious disease patients but are not designed to handle infectious pandemics. Hence, several of our institutions even had to undergo infrastructure changes to accept Covid patients. This is the critical reason why unlocking of capacity in the private side is low. The amount of infrastructure the private sector has in its current form is extremely limited," he says.

As long as the Covid fight was limited to government hospitals, costs were not considered a problem. However, the moment the load started shifting to the private sector, which started charging the way it does under normal circumstances, complaints started. There were instances of private hospitals asking for advance payments and charging several times more than the rates fixed by state governments. Most said the government rates were too low.

The promoters of hospitals taken over by governments for Covid treatment have their own share of worries."Out of our 10 hospitals, six, four in Bengal and one each in Bihar and Odisha, have been taken over. In four Bengal hospitals, the government is utilising the existing manpower, while in the other two, they have got their own manpower to run the facility. However, there is lack of clarity on payment," says Sabahat Azim, Founder, Glocal Healthcare Systems. While the company has received some money for part payment of salaries, consumables, etc., there is no clarity when normal revenue flows will resume. "People are scared, patients are scared. They dont want to step out unless it is very, very, critical."

Niira Radia, the Chairperson and Promoter of Mathura-centric hospital chain Nayati Healthcare, considers patients' 'fear' as the biggest challenge before healthcare providers. Radia's less than a decade old hospital chain caters to Western Uttar Pradesh, and is among the few tertiary care facilities serving the 60 million-odd population of Mathura, Agra and Aligarh districts. The demand for tertiary services in these Tier-II and Tier-III cities far surpasses the supply, though none of that is helping Nayati as people avoid other treatments due to fear of contracting the Covid-19 infection. "The occupancy level of non-Covid beds in our flagship hospital in Mathura is less than 25 per cent. Among the 100 beds earmarked for Covid there, hardly 20 are occupied," says Radia. The company has reworked the salary structure of employees and kept in abeyance its decision to open new hospitals in Northern India, especially in the National Capital Region.

The government has said that it will earmark some funds to fill the viability gap to encourage establishment of healthcare infrastructure in Tier-II and Tier-III cities as part of its economic stimulus package to fight the Covid-induced slowdown. But it is minuscule compared to what other countries, with much better health infrastructure, have done. The US has announced a $150 billion federal funding to help hospitals and healthcare workers fight the pandemic. The UK has announced immediate assistance of Euro 5 billion to strengthen its National Health Service. India does not have the money to spend anything close to these numbers but the industry expects the government to at least clear its estimated dues of Rs 1,700 crore for treatment under health assurance schemes like CGHS and ECHS. It is also seeking sops like loans at concessional rates, tax concessions and deferment of statutory liabilities.

Arindam Haldar, CEO, SRL Diagnostics, says a central body should decide the new pricing (for Covid tests) across the country, and it should not be left to each state. "Secondly, while the government has reduced prices of tests, it has not capped prices of inputs. As one of the largest lab chains in the country with sufficient capacity, we are more than willing to reduce prices provided input costs are also capped. Some inputs attract very high tax (as high as 18 per cent), and the government should look at making these inputs tax free," he says.

While it is nearly impossible to predict what the next pathogen threat will be, from where it will emerge and when it will strike, there is no doubt that the government and the private sector should be better prepared against infectious diseases. "The Covid-19 pandemic has exposed that we have a fragile healthcare system which was underprepared to detect, respond and contain the spread of the disease. It brings to the fore that India needs to priortise and escalate its investment in healthcare infrastructure, implement a multifold increase in medical education to build up the medical and paramedical talent base and provide a supportive regulatory environment and policy ecosystem to scale up indigenous manufacturing of medical technology. Most importantly, we must strengthen our infectious diseases surveillance system to detect early and respond effectively," says Asia Healthcares Bali.

The sector also requires massive capitalisation. A big push by the government, probably pumping in 3-3.5 per cent of GDP into the healthcare sector, can kick-start this infrastructure development.

CRISIL's Chaudhary, who says the private healthcare sector will see a 10-15 per cent drop in revenues in FY21 due to low occupancy, poor price realisation because of cap on costs and loss of revenues from medical tourism, says it is expected to recover from the third quarter of FY21 (from October 2020). "The average occupancy level for the hospital industry is 65-70 per cent. By Q4 (January-March 2021), we expect this to go back to 60 per cent levels. Further, we expect a rebound next year and whatever is lost (this year), most of it will be gained," she says, adding: "All depends on a Covid cure coming, and that is our baseline assumption."