In a Covid-stricken world, as government spending shifts to healthcare, infrastructure should not get the short shrift. That could severely impact the economy
Nirbhay Kumar | Print Edition: May 31, 2020 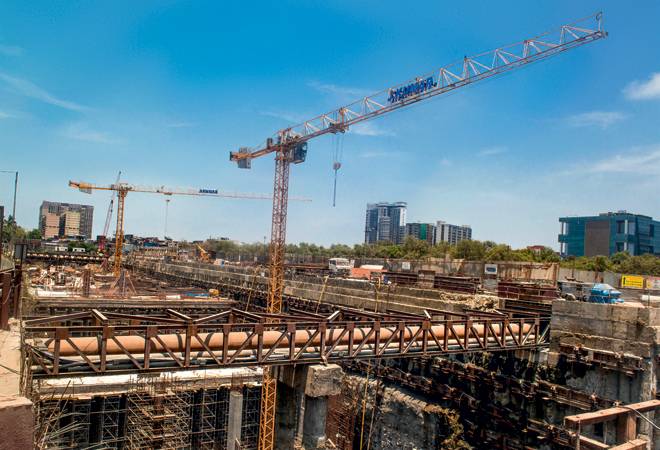 Over the past year, as the Indian economy was getting mired in a deep slowdown, government expenditure grew 11.8 per cent in Q3 FY2020. Much of this was spent on building infrastructure, which created demand for cement, steel and construction businesses. The other three drivers of India's gross domestic product (GDP) growth were on shaky territory. Private consumption expenditure rose 5.86 per cent and business investment fell 5.16 per cent while net exports dipped 1.1 per cent. 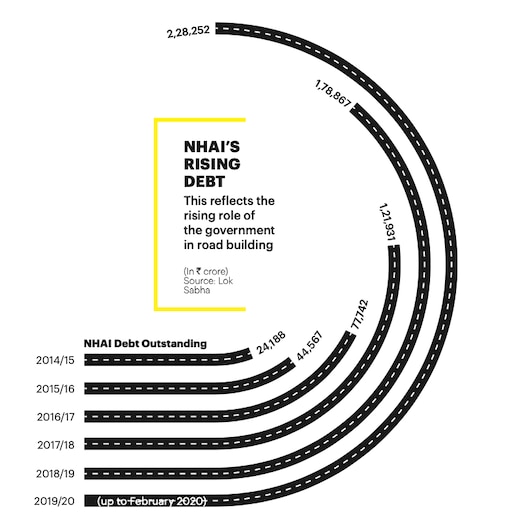 Any lowering of government spending on infrastructure will also hit private players that are already implementing big projects as their payments will be delayed. The operators of existing projects are anyway suffering as passenger and freight traffic across road, rail, sea and air has come to a virtual standstill.

The battle has just begun. While operational projects will see lower traffic, there will be fewer new projects. Banks, after having burnt their fingers in road projects in the not-too-distant past, will be extra cautious in lending. They could reassess risk even in case of sanctioned loans. In such a situation, the government will have to clear bills of developers on priority, make contracts more investor-friendly and maintain the current level of spending.

"Realistically speaking, infrastructure investment will take a backseat because the government has to give priority to healthcare. Money will go to the health sector and after that infrastructure. While not committing itself to new investments, the government should keep the present projects going so that they do not move towards bankruptcy. They should be protected," says Hemant Kanoria, Chairman, Srei Infrastructure Finance. 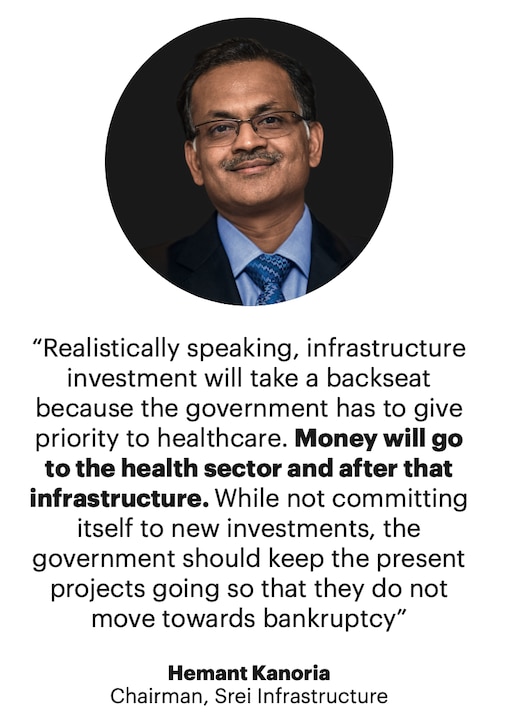 This is not going to be easy. Even before the coronavirus pandemic hit the Indian economy, the first advance estimates for FY2020 had pegged gross domestic product (GDP) growth at an 11-year low of 5 per cent, down from 6.1 per cent in FY2019. Now, that will be revised downwards sharply. The outlook for the current fiscal is bleaker as coronavirus takes a toll on the economy. The World Bank recently said India's growth could slip to 1.5-2.8 per cent as the world heads towards its worst recession in decades.

"I think everything will have to be revisited. The world will change. Growth of traffic, tourism, logistics will be different. So, even the government's focus and priorities will get reassigned to sectors like healthcare, and allocation to roads may be hit in the short term. It will take more time for normalcy to return and the government will see what its priorities are," says Vishwas Udgirkar, Partner, Deloitte India.

The Modi government has been giving top priority to road building and allocating higher budget to the sector year after year. In one of the most innovative ideas, it came out with the hybrid annuity model (HAM), reducing private developers' equity burden significantly. HAM emerged as a popular mode of bidding among private developers. The traditional engineering, procurement and construction (EPC) and HAM have been propelling growth in the sector. Under HAM, the government or NHAI provide 40 per cent of the project cost to developers during the execution phase. The balance 60 per cent is arranged by developers as debt and equity which they recover from the highway authority in annuities. In an EPC contract, the entire project cost is borne by the government. Industry experts believe that the build operate transfer (BoT) toll mode of bidding will now take time to pick up as private developers will not take traffic risks in the wake of slowdown triggered by the surge in coronavirus cases. The BOT is a popular bidding mode for private sector. 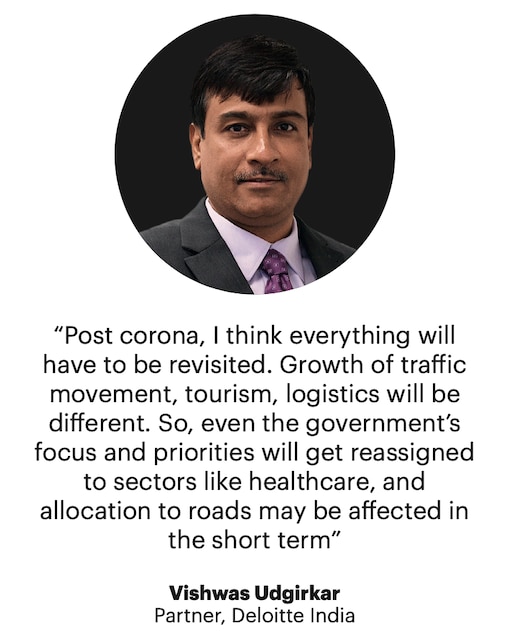 Asset monetisation plans, too, are likely to get deferred, as companies may avoid new investments till normalcy is restored, though even from the seller's point of view this is not the right time to offload assets as valuations will be at a substantial discount. Therefore, both toll-operate-transfer and InvIT plans may not bear fruit in near future. Redeployment of budgetary resources and slow progress on asset monetisation are likely to affect infrastructure funding. "In BoT projects, propensity to take traffic risk will be lower. Banks will also reassess risks and be cautious. Hence, revival of BoT, if at all it happens, will be slow," says Sandeep Upadhyay, MD (Infrastructure Advisory), Centrum Capital. The government may also go slow on fresh bids. "On the flip side, given the rising unemployment, boosting construction activity can be a major way for the government to neutralise the impact of Covid-19," he adds.

Going forward, there is a possibility of banks and financial institutions going slow on giving credit for infrastructure projects due to time and cost overruns. The extended completion time means lower profitability for private developers. This could affect their ability to take loans. "On a temporary basis, there will be impact on credit availability given the volatile situation. (Right now), lenders' focus is on taking care of additional requirements of existing borrowers along with recoveries post moratorium. From lenders' point of view, for the infrastructure sector, there is no change in risk perception. Post-Covid, credit availability shouldn't be a challenge for the sector," says Rajeshwar Burla, Vice President, Corporate Ratings, ICRA.

As most highway projects are funded with public money, the borrowings of the National Highways Authority of India (NHAI) have swelled over the last few years, raising doubts about the authority's sustainability. The NHAI's total debt has ballooned to Rs 2,28,252 crore in FY2020 (till February) from Rs 24,188 crore in FY15. However, a former NHAI member allays such concerns and says the debt is manageable and not alarming. "It is a very robust model. If traffic is low, the concession period could be extended by five years or the NHAI may bid out projects through other models. The funds were raised after doing the repayment analysis. It is within the norms of leveraging. In fact, it is much safer compared to other businesses," he says.

While uncertainty continues across sectors, highway developers and experts see infrastructure development taking a hit only in the short term. "The government will be very aggressive as far as infrastructure is concerned. Infrastructure will continue to play a key role in economic growth. The sector is a major employer of unskilled labour in the country. Though there are other priority areas, too, basic infrastructure like railways, roads and power will continue to be the focus," says Satish Parakh, Managing Director, Ashoka Buildcon. Asked if there will be challenges in getting working capital from banks, Parakh says it has been a manageable issue so far but in case the lockdown extends to two-three months, it could become a problem.

Experts say it is important to provide funds for existing projects to complete them. An operational asset will help generate revenue and enable authorities to bid out new projects. A stuck project also adds to the stress on banks balance sheets, which have already been under pressure due to high NPAs. While it will be difficult to revive them once they get stuck, onset of monsoon is set to slow down the pace of construction. As the government has now eased lockdown restrictions to kickstart some economic activities including construction of key highway stretches, the private developers are grappling with supply disruption of inputs like steel, cement and bitumen. The broken supply chain threatens to hamper work flow and eventually result in time and cost overruns. While invoking force majeure clause by developers would get them extension to complete the projects, they will still have to bear some expenses which could eat into their profits. Construction activities generally peak during the January-June period and enter the lull phase after the onset of monsoon, which goes on till September.

"If the government does not complete the project, it will end up spending double the amount to revive it. It does not make sense to pull money from committed projects. You may relook at new projects," says Jagannarayan Padmanabhan, Director, Crisil Infrastructure Advisory. He says in projects where developers have completed 70-80 per cent work, there will be significant debt, so faster and quicker mechanism should be put in place to avoid cost and time overruns.

Delay in resolving one project could have a wider effect as developers have a portfolio of projects. So, experts feel the tone by the authority has to be accommodative. It must find resolution for all so that the impact is minimal. Developers see release of funds as the key to continuing the momentum and remain hopeful of a stimulus package that will meet their expectations. While they will get extension for completing the projects, a temporary loan by the government - adjustable against future revenues - is being seen as a big support.

As the world goes into slowdown and takes at least a year to recover, the silver lining is that India is still expected to grow at 2 per cent. Also, global manufacturing giants have started looking to shift their manufacturing base from China to alternative low-cost locations. India can turn the coronavirus crisis into an opportunity.