An assortment of opportunities is on offer as cricket’s masala version gets off to a heady start.

He has led his unit in Jammu & Kashmir where quick, and correct, decisions can make the difference between life and death. Yet, for a relatively easy task, Colonel Vinod Bisht was facing a unique predicament this March. A student of the Post Graduate Programme in Public Policy and Management (PGP-PMP) at IIM Ahmedabad, the 45-year-old Colonel Bisht faced a problem of plenty during the placement season. 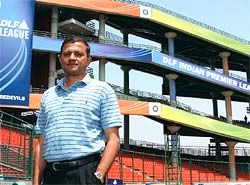 Colonel Vinod Bisht
He had three offers to choose from—a techno-commercial profile at a leading telecom service provider, an IT role at a power company and an operations role at a sports company. After a lot of uncharacteristic deliberation, Bisht settled for the last and has not regretted the decision since. In fact, he realised a few days into the job that this decision would probably propel him to unanticipated glory. “I realised I was suddenly sought-after when the placement brief was given at the institute,” says the ace paratrooper. Rightly so, because as part of GMR Sports, he has one of the most enviable jobs. Bisht is Associate VP (Operations) at GMR Sports and a day at work for him usually means interaction with stalwarts like Virender Sehwag, Daniel Vettori, Shoaib Malik and Glenn McGrath, who are part of his IPL team Delhi Daredevils.

While IPL has bowled over the nation with its first leg, it has also heralded a new era in cricket management. With franchisees joining the bandwagon, the business of cricket has just acquired a professional aura. Away from the onfield action, there are professionals from diverse backgrounds who are charting out a career in sports. Some, like Bisht, have joined the fray while others are biding their time to see how the market realities work for cricket. 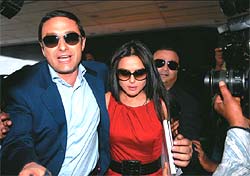 Ness Wadia (left)
Without a doubt, cricket has become another industry and needs to be handled professionally. Says Ness Wadia, Promoter of the Kings XI Punjab franchise: “For me, there is no difference between running the business of cricket or running a company. As in other businesses, you need people in marketing, operations and sales.”

Cricket administrators and stakeholders across the spectrum agree that IPL will change the face of sports management in India. Reasons Charu Sharma, CEO, Bangalore Royal Challengers: “An event like IPL will certainly give rise to a lot of professional input in all spheres of cricket.”

Raghu Iyer, 37, Chief Marketing Officer, Emerging Media (Rajasthan Royals franchise), has had top-level corporate exposure over the last 13 years across the telecom, media and entertainment industries. It was his passion for cricket that prompted him to join Emerging Media in August 2007 “to make a cricket reality show”. He was then Director of Sales at Discovery channel. The move paid off soon thereafter as Emerging Media won the rights to IPL Jaipur. Asked how life at Rajasthan Royals is for him, Iyer quips: “Life is fantastic, spent mostly in Jaipur and at airports.” Emerging Media at present is a small team of 10-12 people. “Wait for the IPL season to get over; you will see top-notch talent eyeing the field. Don’t be surprised if investment bankers and finance whizzes queue up to join the fray,” Iyer signs off. Melroy D’Souza
Cricket administrators could not agree with Iyer more. Says Amrit Mathur, VP (Operations), GMR Sports: “I see a huge change in the way cricket is managed.” The former BCCI man stresses: “Certain areas in the business of sports management needed fresh infusion of talent. These range from advertising, promotion, event management, hospitality to public relations to better experience for spectators at stadium and logistics.” And this talent acquisition will only intensify in the times to come. As Sharma says: “For now, the activity is relatively limited. As we move on, I see more professional managers becoming part of the team. We, at Bangalore, have not employed many people so far, but after June (once the first IPL season is over) we will sit and decide on the course forward.”

What kind of people will he look for? Sharma says: “When we hire, we will look for profiles that fit our business; that means no number-crunchers; these persons should have an abiding interest in sports. If they have sporting affiliations, so much the better.”

The picture is not just limited to franchisees getting fresh talent to run their businesses. There’s a rush of new opportunities in outsourced functions. For example, at the Delhi Daredevils, functions such as cricket administration, marketing & branding and operations are taken care of by the GMR Sports team, while part of logistics, hospitality and functions like ticketing are outsourced.

The dynamics of IPL give sports marketing companies an opportunity to get more involved in areas like player transfers, team sponsorships, merchandising and image rights of players and teams, ground and in-stadia development and player management, to name a few. (From left) Mallya, Modi, Khan, Preity and Ness Wadia
All these areas require specialists who have spent a fair amount of time in the industry. “Corporate houses will now need sports management companies to work for them not only as event managers but as consultants or partners on a year-long basis, keeping in mind that after the 44 days of the inaugural IPL tournament, franchisees will need to adopt different sports and properties to build team loyalty and fan base,” says Melroy D’Souza, General Manager, Professional Management Group (PMG).

All of 27, D’Souza is already a veteran of sports management. He started in the year 2000 while still in college. “This industry is evolving very fast. More than getting clients, it’s difficult to get talent,” he says. D’Souza is looking for people for his Mumbai office. So big is the demand from India Inc. to get into sports today that PMG is setting up its office in Delhi soon.

The companies are scouting for people who have experience in player management, international event tie-ups, marketing, media relations and client servicing, among others. The idea is to acquire specialists rather than multi-taskers. Individuals are considered ahead of the curve if they are specialists in their field and understand how the sports work.

As in cricket,the trick to run this business is to hire a good team. Ness Wadia puts it succinctly: “You are managing two teams, one off-ground and one onground. We have a long-term vision and are hiring the best people— best coach, best players and best people to run the business.” For their part, compensations already match the best. Mathur says: “It’s pretty clear very early that IPL can pay for the right talent— both on-field and off-field.” For those looking for an action-packed career, there’s no dearth of perks— you get to rub shoulders with the who’s who of the cricketing world, part of your own playing XI.

Prescription for a rewarding career