Firms are tweaking their HR policies to offer never-before incentives, carrots, compensations and growth opportunities to the limited talent pool available. Hiring is a challenge and retaining people an onerous task at the Big Four of accountancy. Saumya Bhattacharya tells us how you can make the most of it. Sangeeta Singh (standing, centre)
Six months back, Pabani Sengupta, 36, decided to go on maternity leave. Nothing peculiar in that except that she wanted the three-month leave for adopting a seven-month-old child. Sengupta is Manager (Financial Advisory Services), Pricewaterhouse-Coopers (PwC) India, that, incidentally, did not have any such provision in its HR policy. “We were facing such a situation for the first time and it took us exactly 30 seconds to decide that this leave should be granted,” says Rohit Bhasin, Executive Director, PwC.

Sengupta brought her bundle of joy Prapti home from the Missionaries of Charity in December last year. Though the company has offered to give more leave to her, she says: “I don’t think I will need that. My daughter is well-settled already.” That is the reality of accountancy talent crunch for you. Firms are tweaking their HR policies to offer never-before incentives, carrots, compensations and growth opportunities to the limited talent pool available. “In the war for talent, it is important that organisations nurture talent,” says Roopen Roy, Managing Director, Deloitte & Touche Consulting India, while Bhasin calls it “cultivating a sense of belonging”. Currently, people mobility is high, and that has implications on hiring people of the right calibre. For these accountancy firms, hiring is a challenge and retaining people, a Herculean task.

Rohit Bhasin
Numbers say it all

The numbers speak for themselves. Hirings across the firms vary but together, the four entities are looking at taking on close to 10,000 people across practices in the year 2008. The hunting ground: premier institutes like B-schools and the Institute of Chartered Accountants of India (ICAI) while one-third of the hirings happen through employee referrals. All Big Four firms operate in India with multiple entities and have a mix of onshore and offshore businesses.

“It’s not easy getting good people. The bulk of our people are CAs and a lot of them move to industries and banks. So, the pool continues to become smaller and smaller,” says Sangeeta Singh, Executive Director (HR), KPMG India. PwC employs close to 5,000 people in India. The number of people hired in India in 2007 was near 1,500. “We see a 15-20 per cent increase in the number of people hired,” adds Bhasin.

It pays to be a specialist

While the openings are at all level— entry and lateral—the evolving needs of clients have resulted in certain domain competencies becoming more crucial than others. PwC has a team of 250 people that takes care of merger and acquisition (M&A) services. Specialisation across industry verticals is hot—be it oil and gas or pharma. “There is so much growth across all service firms, we need people across the spectrum,”
says Bhasin. 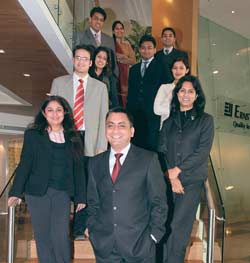 Sandeep Kohli
While Ernst & Young assesses a person on the values it lives by, what could clinch it for the contenders is entrepreneurial spirit. “It’s crucial at all levels how much you are going to go beyond, go extra mile for your organisation,” says Sandeep Kohli, National Director (HR), Ernst & Young. In most cases, the talent acquisition is a sub-set of a mechanism working globally.

Deloitte is specially looking for people who have had experience abroad. “As India goes global, we require people who have global capability,” says Dhananjay Bhansod, Chief People Officer, Deloitte.

For those who are ahead of the curve, these firms offer compensation and a clear-cut growth path. While salaries have been increasing over the last five years, these have gone up exponentially now.

Five years ago, the annual increase in the salary was about 10-15 per cent; today this has gone up to 25-30 per cent for top talent. Singh points out: “Salaries have gone up exponentially. It’s fashionable now to expect a 30 per cent increment every year. In our industry, they are astute with numbers after all.” At Deloitte, salaries have increased upwards of 25 per cent per annum.

However, Roy points out: “We know that compensation alone does not retain talent. We have implemented a career model called Global Excellence Model (GEM) to help talent blossom in Deloitte—an individual does not look to Deloitte only for a job, one looks for a rewarding and stimulating career.”

All the firms are banking on this something extra to lure talent. The reason: in the war for talent, it is important that organisations not only get but also nurture talent. While Ernst & Young is banking on “cross-functional mobility and global connect”, Bhasin says: “There is a huge exposure that you get in a firm like PwC. It’s a highly entrepreneurial model at that stage.”

By some conservative estimates, the attrition rates at the Big Four are between 15 and 20 per cent. To slow down the revolving door, the firms are playing the diversity card to rope in fresh talent. Interestingly enough, they are increasing their intake of women employees, luring them with incentives like flexitiming and motherhood-friendly policies of that sort that benefitted Sengupta of PwC.

At Deloitte, 32 per cent of employees are women and the distribution is fairly uniform across 13 locations. “The way it is growing, the day is not far when we will have a 50:50 ratio,” says Bhansod. Roopen Roy (centre, foreground)
While people are the biggest assets for these firms, the growth opportunities being offered at present are unprecedented thanks to the challenges being faced by them. Says Kohli: “The investment we make in employees is huge and we need to provide wholesome experience so that they do not need to move.”

This wholesome experience gets reflected in cross-functional mobility being offered. Global exposure works as an attraction as well. In the next three years, Deloitte will hire almost 50,000 people on a worldwide basis and it is focussing on diversifying its talent pool and thinking strategically and longterm.

“Deloitte has placed a large bet on India which, we believe, is paying off well and India will be a talent pool into which Deloitte will continue to dip,” says Roy. For the job seekers, the world is the oyster for now.

For high fliers only