When 24-year-old Arvind Nagasayanam preferred Huawei China over a stint in the US in 2001, most of his peers raised an incredulous eyebrow. Not without reason, though.

When 24-year-old Arvind Nagasayanam preferred Huawei China over a stint in the US in 2001, most of his peers raised an incredulous eyebrow. Not without reason, though. 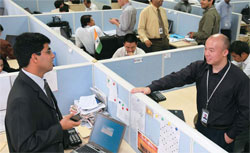 Those were the heady days of a hot scramble for H-1B visas. Seven years and an impressive career growth later, a vindicated Nagasayanam, now 31, is having the last laugh as he finds his peers in India and the US looking at the extensive China experience on his CV with awe and admiration.

A 1999 batch computer science graduate from what now is IITRoorkee, Nagasayanam had envisioned a trend that others are waking up to now. Destination China is the latest lure for Indian professionals and the Chinese companies are equally quick in lapping up the Indian talent.

Says Nagasayanam, Senior Marketing Manager, Huawei China: “The primary incentive for me was the young company that looked very dynamic, had good products and good vision. I first joined the R&D office of Huawei at Bangalore and within months decided to move to China.” What clinched the China foray was Huawei’s Next Generation Network (NGN) project. “I did not want to miss the opportunity of working on such an ambitious R&D project,” he says.

That’s a sentiment echoed by many professionals. Research areas across sectors and opportunities in supply chain, manufacturing and financial services are attracting a lot of Indian talent to China.

Undoubtedly, India has emerged as a market for talent across the world. And now, Chinese companies are leveraging this talent to their advantage. The China experience for Indian professional centres on three C’s—the (red) carpet, the carrot and the challenges.

Indians bring a lot of value to a Chinese company, starting with their exposure to the challenges of emerging markets and the ability to communicate well in English.

India has high quality education, thus can provide a big talent pool, which is very useful for Chinese companies with global ambitions.

Andrew Tsui, Chairman (Southern China), Korn/Ferry International, Hong Kong, lists the pluses Indians bring to the table: “Through the MNC executive circuit, Indian executives have good exposure to modern management principles; are exposed to the challenges of emerging markets and can communicate well in English.”

This is especially the case in finance and consumer sales and distribution. An example is financial services firm PPF Home Credit, which prefers Indians to their China counterparts, as there are more of them who have been exposed to global business practices longer.

Some prefer to call it an extension of a global trend. Says Anjali Bansal, CEO, Spencer Stuart: “Indian professionals are being sought after not only in China but all over the world. Indians have a long exposure to global business practices.

Global Indian is no different from his European and US counterparts and may be rounded off better.”

Add to this the fact that Indians have been phenomenally successful in bridging the culture and language gap with the English-speaking countries of the world.

Reasons Lin Yan Qing, Director (Marketing), Huawei Telecommunications India: “At Huawei China, Indians play an important role because they help to build up a multinational, cross-culture company presence, which is very important to be a global company.”

The main incentive for most Indians moving to China is the exposure. “You get a bigger platform in terms of value proposition with China experience in your biodata. Also, it’s not too difficult to work in China because of their thrust on entrepreneurship and similar core values,” says R. Suresh, MD-India, Stanton Chase International.

Indians working for Chinese companies are no less impressed with the growth they suddenly find themselves in. The reason: Infrastructure in China in areas like pharma R&D is “light years ahead” of India.

These professionals say they want to work in new areas in their specialised fields and the location becomes irrelevant. The cutting edge of science excites them; so does scale and size—as turned out to be the case with Deepak Hegde.

The offer to work as a Vice President of pharmaceutical services at Shanghai-based Wuxi PharmaTech had the 38-year-old Hegde do some serious research on the company as well as the country. Hegde, now at Wuxi for over four months, right away noticed the company’s strong chemistry background and saw a potential to “synergistically use” his experience in the field of formulations development.

He was also fascinated by his exposure to a new culture. “Back in India, many friends were sceptical about my choice of China instead of the US or Europe. But I really admire the drive and motivation that is prevalent throughout the company, and I think that can be said for all of China as a whole.”

Suresh’s special tip to Hegde and others like him: If you get into the trust loop, you can make it big in China.

Compensations are competitive but are not the primary deciding factor yet. “Financially, the savings potential for Indians in China is no different than in Singapore or Hong Kong. The expat packages are competitive but there is disparity with western expats,” says K. Pandia Rajan, CMD, Ma Foi Consultants.

The big challenge in the Dragonland is working across cultures. One needs to understand how the Chinese think, behave and react.

“Chinese by nature do the work which is prescribed and defined, role taking and initiatives do not come naturally to them.

For this reason, many Chinese companies prefer senior managers from countries that have good track record in management skills,” says Rajan.

Aditya Mishra, 37, describes himself as “an Indian working for an American MNC with Chinese colleagues serving global customers” and finds his role challenging.

Two things were most important—the start-up nature (of the work) and the opportunity of working in a cross-cultural environment.” Mishra is a Finance Director (Asia Start-up) at a US Fortune 100 company in Shanghai.

“The whole idea was to specialise in Asia-Pacific region. There are a lot of inter-linkages in the Indian and Chinese economy.”

While the professional objectives have been taken care of, Mishra and most Indian professionals find language the biggest challenge in China.

How do they tackle this challenge? Well, it’s strictly—to each his own. While Mishra learnt mandarin for one year and “can manage”, Nagasayanam has not been able to learn the nuances of the language in seven years.

Vegetarian food can be another problem; that, however, gets dealt with at the level of the employer.

Huawei China has an Indian kitchen (it serves rice, sambar, roti and sabzi) for its employees, including Indians on deputation.

But as Mishra says, “We have adapted.” The 1,500-strong Indian professional community in Shanghai had its first Durga Puja this year—they even got a priest from Kolkata.

Seems like time for an auspicious beginning for desi professionals in China.